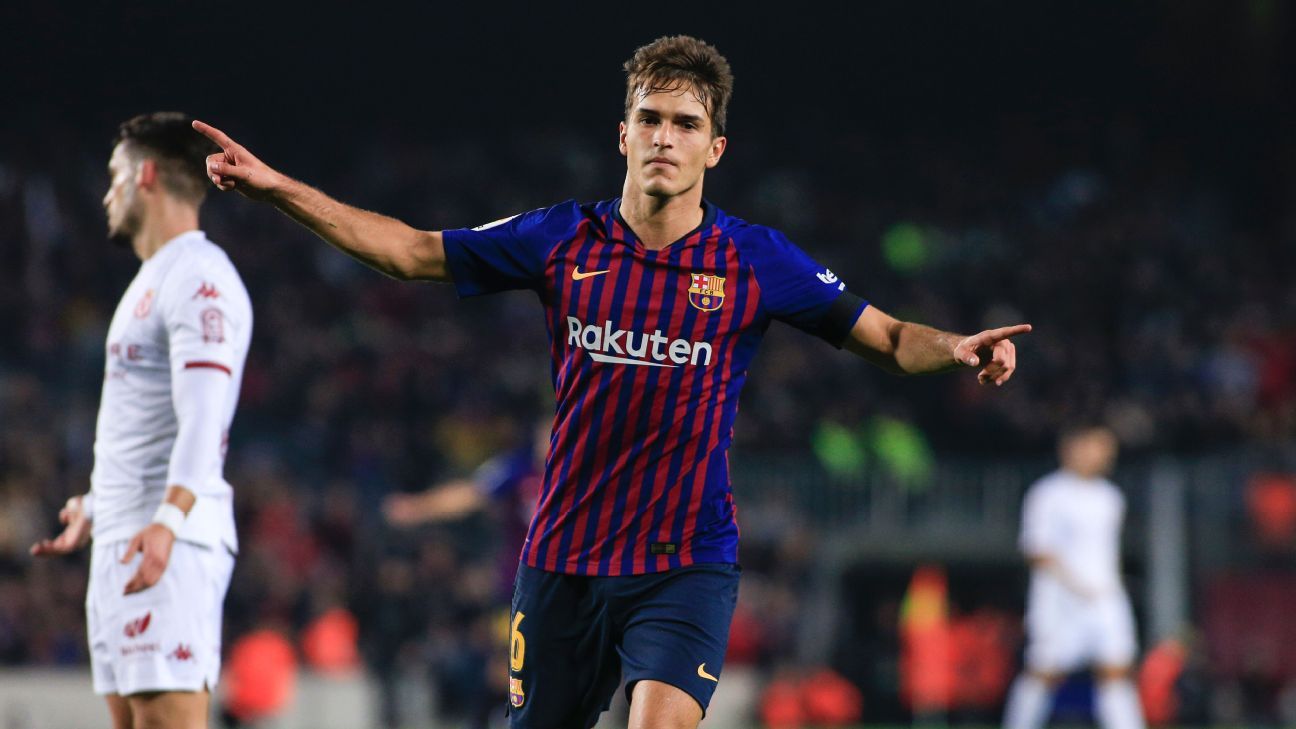 With Cesc Fabregas tipped to join AC Milan, Chelsea have stepped up their interest in wantaway Barcelona midfielder Denis Suarez.

As per The Mirror, the former Manchester City youngster is on Chelsea’s radar having struggled to nail down a place under Ernesto Valverde at the Camp Nou.

Suarez replaced Ousmane Dembele during Barca’s Champions League draw with Tottenham on Wednesday night, but has featured just once in La Liga this term. The 24-year-old would cost Maurizio Sarri’s side approximately £15 million.

Frenkie de Jong has been strongly linked with a move to Paris Saint-Germain, while Matthijs de Ligt, Hakim Ziyech and David Neres have all been touted to leave the club.

“I will fight for my players,” Ten Hag told Sport Bild. “I rather not give away more than three players next summer. Otherwise, it’ll be difficult to have permanent success.”

10.01 GMT: It’s been quite some year for Benjamin Pavard. Having won the World Cup with France in the summer, he now finds himself in a relegation battle with club side Stuttgart.

Interest from Bayern Munich remains strong, but a move to the Allianz Arena in the January window has been ruled out by both sides.

09.36 GMT: Real Madrid’s reported interest in River Plate midfielder Exequiel Palacios dates back to before he won the Copa Libertadores at the Santiago Bernabeu last weekend.

However, he is set to stay with the Argentine club until at least the summer, after all parties reached an agreement that he will not move in the January window.

09.06 GMT: Fresh from their Champions League draw with Tottenham, Barcelona and Ivan Rakitic have hit back at reports that the player has an agreement to be sold in the summer for less than his €125m release clause, Mundo Deportivo report.

08.27 GMT: TyC Sports report that Boca Juniors have received a formal offer from Ajax for their central defender Lisandro Magallan. The Dutch giants tried to sign the 25-year-old this summer but were unsuccessful and have now made a €9m bid to sign the La Plata-born player this month.

08.00 GMT: Tottenham forward Fernando Llorente is open to a return to his former side Athletic Bilbao. The Spaniard has had limited playing time at Spurs, but is tied to the club until next summer, with an option to extend the deal for a further year.

“My priority is to feel important in a team,” Llorente told Cadena Ser after Tuesday’s Champions League 1-1 draw with Barcelona. “If I have the opportunity and they (Athletic) speak to me, yes I would like to return. I have the option to remain (at Tottenham) a further season. To leave in the winter transfer window does not depend on me, Athletic would have to talk to Tottenham and to (its chairman Daniel) Levy.”

Manchester United have expressed interest in Middlesbrough winger Marcus Tavernier, according to the Daily Mail.

The 19-year-old England youth international has just a handful of professional games under his belt at club level and would be expected to link up with United’s U23 side.

A product of Boro’s youth academy, Tavernier isn’t a guaranteed starter under Tony Pulis, but caught the eye recently when he scored in successive Championship games against Brentford and Preston.

Paris Saint-Germain contract rebel Adrien Rabiot will hold one final meeting with the French champions regarding his future and, according to Paris United. Barcelona and Tottenham are heading the queue for the 23-year-old’s signature should he fail to agree an extension.

Rabiot has reportedly rejected multiple contract offers from Les Parisiens but will not be short of suitors if he chooses to leave the French capital.

Barca sporting director Eric Abidal is prepared to pay Rabiot over £9m a year and, while Spurs remain keen on the midfielder, they are unlikely to match the Catalan club’s contract offer.

£22m Silva among those tipped for Foxes exit

Portugal international Adrien Silva is one of four players heading for the Leicester City exit door in January.

The Mirror says Claude Puel is also prepared to offload Yohan Benalouane, Andy King and Danny Simpson, all of whom were part of the club’s title win in 2016.

But Silva, who cost the Foxes £22m when they signed him from Sporting Lisbon, has failed to make an impression at the King Power Stadium and hasn’t started a Premier League game since the defeat to Manchester United in August.

The Mirror claims Newcastle will attempt to sign Benfica midfielder Andreas Samaris for the second time when the window reopens in January.

The Magpies chased the Greek international’s signature in the summer, but balked at Benfica’s £10m asking price.

With the 29-year-old’s contract in Lisbon set to expire next summer, however, Newcastle are confident of securing a cut-price deal.

The Blues are prepared to rival Bayern Munich for the Frenchman’s signature. Fekir, who was close to joining Liverpool in the summer, is widely expected to leave Lyon and, with Eden Hazard continually linked to Real Madrid, the 25-year-old playmaker would help fill the creative void if the Belgian departs for Spain.

The Brighton midfielder has been linked with a shock £15m move to Anfield. Gross, one of the bargains of the Premier League last season, has endured an injury-hit second campaign at Brighton, but has a high-profile admirer in Jurgen Klopp, who is keen to strengthen Liverpool’s midfield as he tries to guide the club to their first title in 29 years.

The former Newcastle United winger has emerged as an Inter transfer target. Thauvin is reportedly keen to leave Marseille in search of Champions League football and has also attracted interest from Atletico Madrid and Chelsea. The 25-year-old scored 26 goals in all competitions to help the Ligue 1 side to the Europa League final last season and has continued that fine form this term with 11 goals in 15 games.

The RB Leipzig striker has been linked with a £40m move to Goodison Park. Augustin has struggled for regular starts under Ralf Rangnick at the Red Bull Arena this season and could become the Toffees’ latest eye-catching addition as Marco Silva aims to bolster his strikeforce.

Reports in Brazil have linked the Bordeaux defender to the Red Devils as Jose Mourinho’s search for a new central defender continues. Pablo’s impressive recent form earned him his first cap for Brazil in October and Mourinho has apparently asked United scouts for an update on the 27-year-old’s progress.