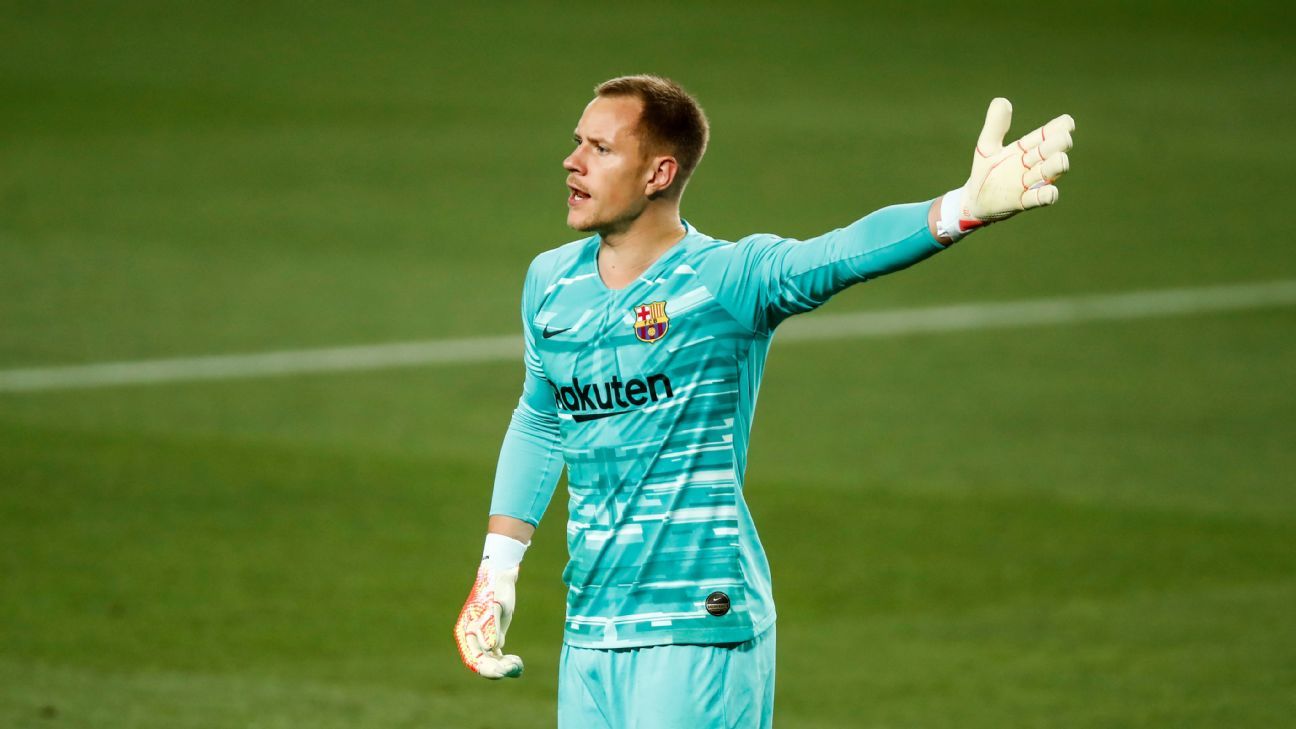 It’s no secret that the Blues are interested in replacing Kepa Arrizabalaga during the summer after a poor run of form throughout the campaign, with Frank Lampard considering the possibility of including Kepa in a deal that would see 28-year-old Ter Stegen make his way over to Stamford Bridge.

Barca aren’t really interested in letting him go, and they’re more invested in the idea of extending his current contract — which is set to expire in June 2022. For now, Chelsea are happy to sit back and see how those negotiations play out.

Among the other keepers linked as Kepa’s successor are Atletico Madrid‘s Jan Oblak; Dean Henderson, on loan at Sheffield United from Manchester United; and Andre Onana of Ajax Amsterdam.

– Olley: Kepa must show he can fit in Chelsea’s title plans

08.26 BST: AC Milan have extended the contract of coach Stefano Pioli until July 2022, the club said on Tuesday, as the club abandoned widely-reported plans to replace him with former RB Leipzig and Schalke 04 coach Ralf Rangnick for next season.

Italian media have been reporting regularly since February that Milan have been in negotiations to hire the 62-year-old on the initiative of the club’s chief executive Ivan Gazidis. Yet those plans became untenable after Pioli inspired a revival.

Milan made the announcement immediately after the team won 2-1 at Sassuolo on Tuesday to extend their unbeaten run to 10 matches in all competitions and guarantee a place in next season’s Europa League.

– Stream Serie A games on ESPN+

08.00 BST: Chelsea are expected to make a formal offer for Bayer Leverkusen’s Kai Havertz when their Champions League qualification is confirmed, sources have told ESPN.

The Blues are thought to be confident of securing a deal in the region of £70-£75 million despite Leverkusen demanding closer to £90m when initial contact was made prior to this month.

Negotiations are yet to begin and so the exact structure of any transfer — relating to add-ons or performance bonuses — have not been determined but sources have told ESPN that Havertz is keen on joining Chelsea this summer and the club expect an agreement to be reached.

Informal discussions regarding personal terms with the 21-year-old have been positive with a four or five-year contract expected to be finalised without any issues once a fee is agreed.

Paris Saint-Germain forward Kylian Mbappe has claimed that he will be staying in the French capital beyond the summer transfer window.

The World Cup winner has been at the heart of speculation over his immediate future, with the popular opinion being that he could be interested in joining La Liga titans Real Madrid. Alas, while his contract may be set to expire in 2022, it doesn’t appear as if he’s going to be going anywhere in the next few months — as the man himself confirmed shortly after PSG’s friendly triumph over Celtic.

“I just have to say that I’m here, I’m in the project for a fourth year,” Mbappe said on Tuesday evening after the match.

“For everyone, the management, the supporters… I’m going to keep going, no matter what.”

Mbappe arrived at PSG from AS Monaco in 2017 in a deal worth €180 million. When asked last week about Mbappe and other potential big signings, Real president Florentino Perez said: “No…Madrid will sign the best again when the situation changes.”

PSG coach Thomas Tuchel also echoed his star player’s sentiments, saying: “Kylian has a contract with us, we’re not ready to sell him. He is super important, he’s a key player, our player. It’s a gift to work with him.”

Southampton have accepted a bid worth up to £25 million from Everton for midfielder Pierre-Emile Hojbjerg, Evening Standard reports.

This latest development ensures that the Toffees have moved ahead of Premier League rivals Tottenham Hotspur in the race to sign the popular Dane. However, despite the first hurdle being cleared, Hojbjerg reportedly still prefers the idea of a move to North London — but Spurs still aren’t able to match the valuation put on him by the Saints.

Southampton had initially placed a £35m price tag on Hojbjerg, but as a result of him only having 12 months left on his contract, the South Coast club have decided to accept a lower offer.

– Liverpool will demand a fee of £6m in order to agree to the sale of Loris Karius this summer, Goal reports. The controversial keeper has spent the last two years out on loan with Besiktas following his disastrous performance in the 2018 UEFA Champions League final, and at this stage, it seems as if his most likely destination will be Montpellier.

– Sky Sports is reporting that Celtic have expressed their interest in trying to sign West Ham United forward Albian Ajeti. Hoops boss Neil Lennon has been at the forefront of talks with the Premier League club, with the Scottish champions questioning his availability. Ajeti has struggled to make an impact on the relegation strugglers’ starting XI, with Celtic being willing to take him on either a permanent deal or a season-long loan.