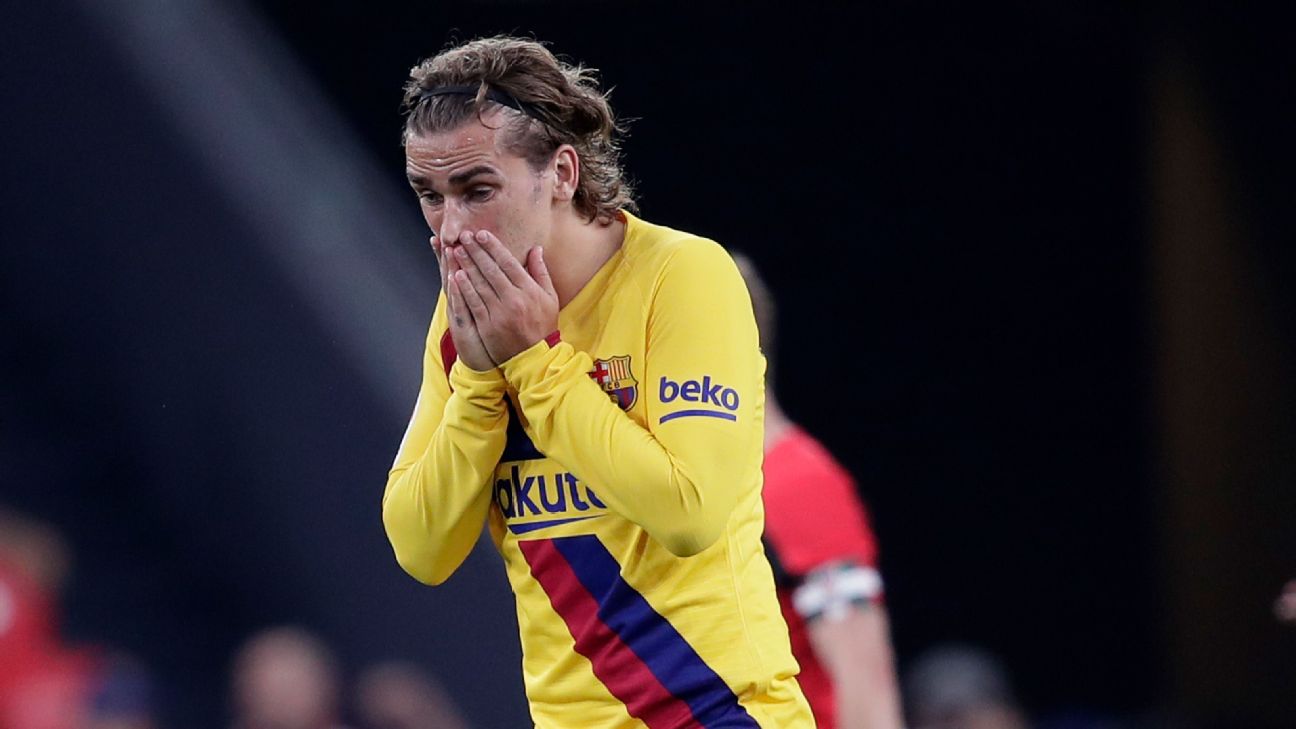 Given the fuss that signing Antoine Griezmann from Atletico Madrid for €120m caused them, it’s slightly strange to see Barcelona reportedly ready to offload him already.

Griezmann, 28, moved to Camp Nou this summer after years of speculation about his future and Barcelona were fined €300 (yes, that’s not a typo) by the Royal Spanish Football Federation (RFEF) over alleged irregularities regarding the transfer, which they will appeal out of principle.

Now Le10Sport reports that Barca are so desperate to re-sign Neymar from PSG that they are now ready to include Griezmann in a potential deal for the Brazilian.

A number of bids were rejected over the summer with Philippe Coutinho and Ivan Rakitic refusing to move in part-exchange, while the final offer was based on a figure of €170m, including Rakitic and Jean-Clair Todibo, plus the loan of Ousmane Dembele for a season.

Sources at Barca have told ESPN FC that they don’t view the summer’s failure to land Neymar as the end of the saga. The club have not ruled out returning with another offer next summer for a player they consider to be a “strategic” signing — someone who brings the club as much on the pitch as he does off it — and could be willing to make Griezmann part of the deal.

23.00 BST: That will do it for the latest edition of our LIVE Transfer Talk blog. We hoped you enjoyed following along with us and remind you to check back shortly for the latest transfer rumours, reports and rumblings. Goodnight!

22.32 BST: Red Bull Salzburg starlet Erling Braut Haland might be the most in-form player in world football right now with 18 goals in 11 games this season. The 19-year-old’s hot start has led to massive speculation about his future and attention from bigger clubs. What does Haland think of all this attention?

“The club is good at shielding me a little, but I hope it will be more shielding in the future. It will be difficult, but we will try. I want to be shielded.

Tell us how you really feel Erling!

20.50 BST: Man United need help up front after selling Romelu Lukaku and Alexis Sanchez but could the help come in the form of a former Champions League winner and World Cup runner up?

A recent report in Calciomercato suggests that Mario Mandzukic, 33, is keen on a move to United in January and that the Red Devils are in pole position to sign the Croatia international. A serial winner and a player known for his work rate and commitment, United sure could use a few players like Mandzukic in the fold.

One worry? His age, as Mandzukic, who figures to be allowed to leave by Juventus, is 33 and has put in a lot of hard miles throughout his career. Mandzukic may help but at this stage in his career he surely isn’t the answer to United’s long list of problems.

19.28 BST: Carlos Vela is sure to be confirmed as MLS MVP, but could the Mexican elect to return to Europe?

After being linked with a loan move to Barcelona last season, rumours have been swirling about Vela, 30, going back to Europe on loan in January. Those rumours were put to bed today as LAFC executive vice president of soccer operations and general manager John Thorrington ruled out a January loan move for Vela in an interview with ESPN Deportes.

“Carlos has played a very strong season, had few injuries, almost every game has played them. In November (when the season ends) a loan cannot be made, it would have to be until January and that does not suit us, because next season we are going to play Concacaf Champions League and I can not imagine that that made sense,” Thorrington said.

Vela has scored an MLS record-tying 31 goals so far this season and has led LAFC to the Supporters’ Shield.

The 22-year-old says he knows some Celtic fans will never forgive him but that hopes that most will over time.

“I don’t know if it will pass, some fans probably won’t ever forgive me,” Tierney told the Scottish Sun. “Everyone has their choice, some people will support me and others won’t.

“I just want to say thanks to everyone who supported me at Celtic. I couldn’t have got the move to Arsenal without their support and love.

“I gave Celtic 15 years. I put my body through a lot by playing through injuries. I gave everything I could every single day.

“Hopefully they will continue to support me but, if not, I just have to deal with that.”

17.19 BST: It is no secret that Man City have a centre-back problem due to long-term injuries to both Aymeric Laporte and John Stones.

The solution? The Manchester Evening News proposes Newcastle defender Fabian Schar as a potential insurance policy for City in January. The 27-year-old Switzerland international has been a real bright spot for scuffling Newcastle and due to his technical ability and comfort playing with both feet, is a player that fits the profile of a Pep Guardiola defender.

In fact, Schar was quietly one of the best defenders in the Premier League last season, ranking ahead of Men’s Player of the Year Virgil van Dijk in terms of both interceptions and tackles. Guardiola says City will be standing pat in January but if City do move for a defender, Schar sure would be an interesting proposition.

Not only did they lose 3-0 to Brighton. Not only did Hugo Lloris suffer a potentially serious arm injury. But Son Heung-Min‘s agent is talking up a move to Napoli for his client.

“I have never brought a player to Napoli, but I’d like too because [Diego] Maradona, my favourite player, played for them,” Thies Bliemeister told Radio Marte. “I haveve talked to Napoli in the past, with executives who are no longer at the club. I will take advantage of this [Champions League] double-header with Salzburg to talk to them.

“As for Son at Napoli, why not? You can never say never in football. Son likes Italy, the food and Italian people. It is not easy to take him from Tottenham because he costs a lot but, one day, who knows?”

15.00 BST: Mauricio Pochettino and Ole Gunnar Solskjaer under both under some serious pressure.

13.56 BST: Italy midfielder Nicolo Barella has revealed that he almost joined Chelsea before their transfer ban in January, but chose to stay with Cagliari.

“Chelsea had been looking to sign me in January, the negotiations were concrete,” he told Gazzetta dello Sport. “At Cagliari I said: ‘it is not an easy time for the team, I will stay until the end of the season. Then I will make a decision’.”

He clearly made that decision as he eventually opted to sign for Inter Milan when Antonio Conte was announced.

12.44 BST: Ajax star Hakim Ziyech has been linked to plenty of clubs recently, with Arsenal and Man City among them. But the Dutch club have moved to tie him to a new contract and have also removed his pesky €26m release clause, reports Telegraaf.

Ziyech may yet move on, as many players from Ajax often do, but the club can at least ask a reasonable €50m for him now his contract expires in 2022.

11.55 BST: Leicester midfielder James Maddison has been attracting the interest of Manchester United, but now the Mirror claims that Tottenham are keen for him to replace Christian Eriksen.

Eriksen looks set to depart north London, as he has not agreed a new contract. And Spurs are now looking to tie up a £60m deal to pip United to his signature.

10.56 BST: Liverpool goalkeeper Loris Karius (remember him?) is on loan at Besiktas, but claims he could return to the Reds or join another Premier League club once his spell ends this summer.

Karius, 26, has never really lived down the gaffes he made in the 2018 Champions League final and certainly won’t get his No. 1 spot back at Anfield now the club have signed Allison Becker.

“I have a loan until the end of the season and then I will see, back to Liverpool or somewhere else in England or somewhere in Germany, you never know,” he said. “Right now my focus is on playing games here every week and then we’ll see.”

10.02 BST: Things not looking so good over at Barcelona, reports our correspondent.

Meanwhile, Victor Valdes told the U19s today he doesn’t expect to continue as their coach. Won’t be in charge tomorrow and meetings ongoing to discuss his future. Don’t expect him to survive.

09.00 BST: West Ham defender Issa Diop has been linked to Manchester United, with the club previously interested in a £50m move before signing Harry Maguire, but now the Frenchman is on the radar of Arsenal.

Football Insider claims that the Gunners have scouted the 22-year-old regularly this season as they look to strengthen their defence.

The World Cup winner with France has spent the last few years turning himself into one of the world’s most reputable stars in the middle of the park, and as a result, he’s been attracting a great deal of attention from some of European football’s top clubs.

It’s been well known that the Italian giants have been interested in bringing Kante to Turin, but now, Real Madrid boss Zinedine Zidane is also putting his resources behind a potential move for Kante.

The 22-year-old has flown under the radar in the last few years, but after scoring nine goals in the Russian Premier League for Krylia Sovetov this season. United’s scouts are said to be closely monitoring his progress as the club try to find a replacement for Romelu Lukaku.

– Anderlecht boss Vincent Kompany wants to bring Ashley Williams to the Belgian club once his spell with Bristol City comes to an end, The Sun reports. The Wales veteran has been at Ashton Gate since earlier on this year, but the former Everton man is believed to be one of the keys to success for Kompany who has struggled to make an impact since returning to his former club.

– Despite having previously been linked with on-loan Real Sociedad star Martin Odegaard, Manchester Evening News is reporting that the club aren’t interested in bringing him to the Etihad. The 20-year-old has been turning heads in the first few weeks of the season after a strong series of performances for the La Liga club. Odegaard is on a two-year loan from Real Madrid, but this recent surge has form has led many to believe that his future lies away from Sociedad. City sources have put any speculation to bed, though, indicating that the youngster isn’t on their radar at this moment in time.

– Former Manchester United and Villarreal star Giuseppe Rossi is still a wanted man with three Italian sides being interested in securing his services, Tuttosport reports. Rossi has been forced to deal with a series of injuries throughout his professional career that have derailed his time at the top, but despite that, Cremonese, Frosinone & Empoli all still want to bring him on board.