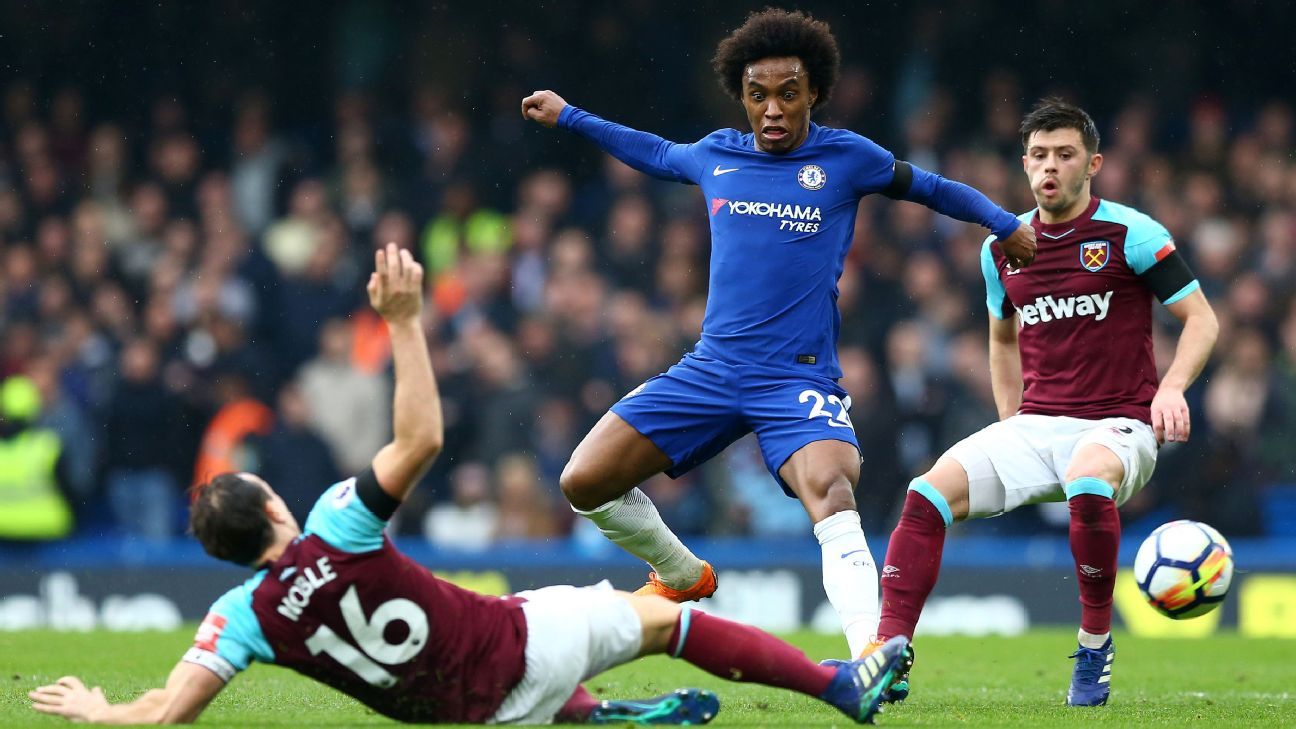 When does the transfer window close in the Premier League and the top European leagues?

Chelsea winger Willian is the subject of a third bid from Barcelona, according to Sky Sports, with the La Liga title holders reportedly lodging a £55 million bid for the Brazil international.

The 29-year-old blew hot and cold for the Selecao at the World Cup, but his pace was evident throughout and he also showed his willingness to commit to defensive duties, working his way back to recover the ball when the team lost possession.

The playmaker was also arguably one of the best players on the field not named Lionel Messi when Chelsea were eliminated from the Champions League by Barcelona in the round of 16, which was perhaps when he first caught the eye of Camp Nou personnel gurus.

However, any move for Willian will have to wait until Barca free up a spot for another player without an EU passport, as La Liga rules limit clubs to just three non-holders and Barcelona have Philippe Coutinho, Paulinho and Yerry Mina taking up those spots.

09.00 BST: Atletico Madrid are interested in signing Olivier Giroud from Chelsea, according to Sky Sport Italia. Atletico had appeared on the verge of sealing a deal for Nikola Kalinic, but the report adds that their patience with AC Milan is waning.

09.16 BST: Lokomotiv Moscow have made an €8 million bid for Barcelona man Aleix Vidal, with an extra €2m in add-ons, according to Mundo Deportivo. However, the offer is is well below the club’s asking price.

PAPER ROUND: Corinthians digging in on Pedrinho

Corinthians will not begin negotiations over midfield jewel Pedrinho for anything less than €50m despite a recent offer of €20m from Ajax, the player’s agent Will Dantas told Globeosporte.

Pedrinho is seen as next in line from the club that sent Malcom, Marquinhos and Willian to Europe for cut-price rates most recently, but “O Timao,” as they are called in Brazil, are playing hardball this time around, per Dantas.

“What happened was [Giuliano] Bertolucci, who has a partnership with us, brought an offer in the area of €20 million from Ajax for Pedrinho. But Corinthians had told me that they only begin negotiating for a price near the buyout clause, which is €50 million, so it wasn’t put forward.”

Dantas said Italian side Udinese, a notorious buyer of young Brazilians, have also logged a bid for the talented 20-year-old.

No one knows just where Karim Benzema will end up before the window closes, but one thing is certain: The Real Madrid striker did not take kindly to comments from Napoli president Aurelio De Laurentiis about links with a move to Napoli.

The Napoli president rubbished reports that they were interested in Benzema and Angel Di Maria among others, calling the two “old men,” while adding reported interest in Radamel Falcao was “totally false.”

And Benzema hit back on Instagram, writing, “Another nutter on the list! No 9s make him lose it,” ostensibly referring to San Paulo exits by Edinson Cavani, Gonzalo Higuain and Fabio Quagliarella in the past decade.

Furthermore, the former France international could really make Di Laurentiis regret his comments at least two times a year if Calciomercato’s report that the 30-year-old is actually on the brink of a move to one of Napoli’s Serie A rivals, AC Milan. Benzema’s representatives have already met with the Rossoneri, with the player already signing off on a move to the San Siro.

– Everton are readying a £22m offer to Barcelona for Lucas Digne, according to the Mirror. The 25-year-old failed to find a regular place at the Camp Nou, but the report says new boss Marco Silva “feels Digne could be Leighton Baines’ long-term successor at Goodison Park.”

– With Thibaut Courtois’ future at Chelsea uncertain, The Sun is reporting that the Blues are lining up a surprise replacement in Joe Hart. There is clearly no future for Hart at Manchester City, despite his participation in the team’s U.S. tour, and Chelsea are now on alert that they could land him on the cheap for just £5m.

– Everton are closing in on a £40 million move for Watford star Richarlison, sources have told ESPN FC. The two clubs are in advanced talks over a deal for the Brazilian, who has flown back from Watford’s preseason tour of Austria for talks and a medical.