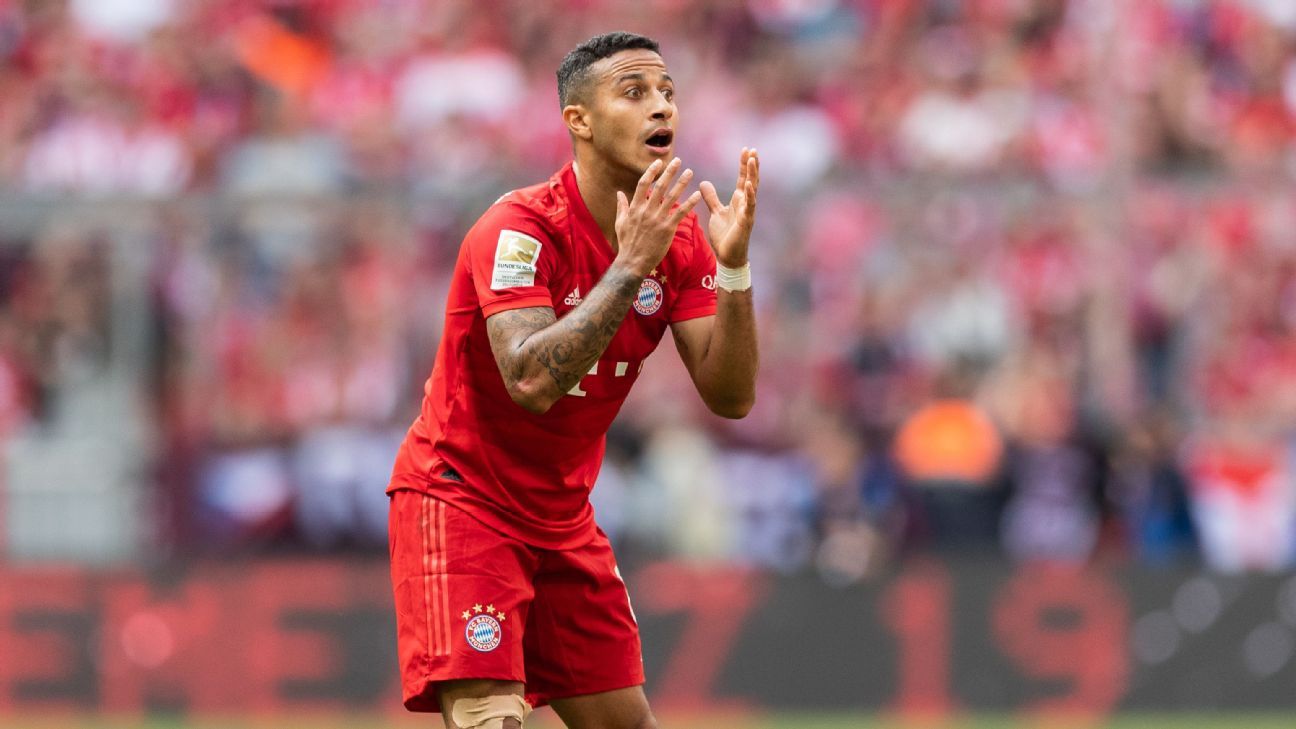 Arsenal have made a move for Bayern Munich midfielder Thiago Alcantara, the Daily Mail reports.

For the last few weeks it has seemed certain that Thiago would be making his way over to Anfield to join Liverpool, and with one year left on his deal, Bayern are eager to sell. The Spain international won’t sign a new contract at Bayern and is keen on a move to the Premier League.

However, sources told ESPN in July that the Premier League champions would only likely to enter the transfer market if a significant member of Jurgen Klopp’s squad leaves, with Georginio Wijnaldum‘s future in doubt.

So Arsenal have spied a gap, though if they want to get a transfer over the line the Gunners will need Bayern to lower their £23 million asking price for the 29-year-old — and they could also be forced to sell Mohamed Elneny and Lucas Torreira as well.

10.46 BST: Finding a good player on a free transfer is like goldust this summer and 21-year-old Malang Sarr is attracting a lot of attention after leaving Lille.

Sarr, a tough tackling defender, is on the radar of both Arsenal and Barcelona, according to the Daily Mail.

No surprise, given the limited finances at both clubs’ disposal.

10.08 BST: Antonio Conte will discuss his future with Inter Milan owners on Tuesday, according to Sky Italia.

The report says that Inter have not yet contacted Massimiliano Allegri, who is the main candidate to replace Conte should the former Chelsea manager leave the Nerazzurri after just one season in charge.

Inter lost 3-2 to Sevilla in the Europa League final on Friday and, after the game, Conte admitted he will take some time to think about his future ahead of next season.

The club finished second in the Serie A standings, one point adrift of champions Juventus. Conte, who has a contract until June 2022, has reportedly fallen out with the Inter hierarchy and is expected to leave by mutual consent.

Allegri took over from Conte when the latter left Juventus in the summer of 2014 to take over Italy’s national team. The 53-year-old has been out of a job since leaving Juve last summer after five seasons in charge.

Julien Laurens explains why he expects Antonio Conte to walk away from Inter Milan after one season.

Reguilon capped off a great campaign while on loan at Sevilla by lifting the Europa League trophy on Friday.

“Reguilon has grown a lot and he is now better than he was when he first arrived here,” Lopetegui told Onda Cero radio. “I hope he can continue with us.”

The 23-year-old scored three goals and set up five more in 38 appearances for Sevilla, 35 as a starter, to attract interest of big European clubs.

Chelsea, Arsenal and Napoli are interested in signing Reguilon, who is tied to Real Madrid until June 2023. Real are reportedly considering selling the Spaniard for €25m this summer but will include a buy-back clause in the deal.

Messi is tied to Barcelona until June 2021 and has not signed a contract extension, leading to speculation that the Argentina captain could leave following a difficult season.

“Messi is the team reference and if I were Barcelona, I wouldn’t let him go in any case,” Ronaldo said during an interview with Banco Santander: “He has a great relationship with the club and I don’t think he is no longer in love with the team. It’s very unlikely that Messi will leave Barcelona.”

The Real Valladolid president then joked: “If were Messi, I would leave Barcelona and would play for one season voluntarily at Valladolid.”

Ronaldo also spoke about Luis Suarez. The Uruguay striker recently spoke of his intention to remain at Barcelona amid reports the club wants to sell him this summer. “He continues to be one of the best No. 9s there is and he has the level to play like that for many years,” Ronaldo said.

08.30 BST: Paris Saint-Germain captain Thiago Silva has left the door open to continue at the club next season.

Silva, 35, becomes a free agent after Sunday’s Champions League final against Bayern Munich and Chelsea have been offered the chance to sign the Brazilian defender, sources have told ESPN’s James Olley, with Fiorentina also keen.

“I’m very calm and very happy with what’s happened here,” he said. “If this is my last game, it will be a joyful one for me. I’m going to give my all to this club. If I had the option to continue, people will sit down and see what the best thing is but the most important thing is that PSG is making history.”

Julien Laurens thinks that Lionel Messi’s enormous wages put him out of reach for every club in the world.

Barcelona will need to pay a huge fee to secure the signing of Everton star Richarlison, the Mirror reports.

The Brazilian forward was the subject of a £100m bid from Barca in the January transfer window, but it reportedly didn’t meet the valuation that the Toffees had set. Now, Everton are happy to do business for Richarlison so long as Barcelona are ready to pay £143m.

Carlo Ancelotti is clearly trying to build something special at Goodison Park, but he’ll have to decide just how important the 23-year-old is to his operation.

Wolverhampton Wanderers could be close to agreeing on the loan signing of Sporting CP star Joao Palhinha, Birmingham Live reports.

Wolves are in need of a few more bodies ahead of the new Premier League season, and Sporting midfielder Palhinha could be exactly what they’re looking for.

After coming back from a loan stint with Braga, Palhinha has been heavily linked with a switch to Molineux.

– The Daily Mail reports that Rodrigo is interested in a switch to Premier League newcomers Leeds United. The level of interest between the two has been well documented, but with how things are going for me right now, it appears as if Leeds could offer upwards of around £30m between now and the end of the season.

– West Ham United have rejected a bid from Norwich City for forward Jordan Hugill, also from the Daily Mail. The interest in Hugill from the Canaries has been well known for a few weeks now yet, while a deal may have initially looked likely, the offer of £3m with an additional £2m in add-ons seemingly wasn’t good enough for the Hammers to accept.