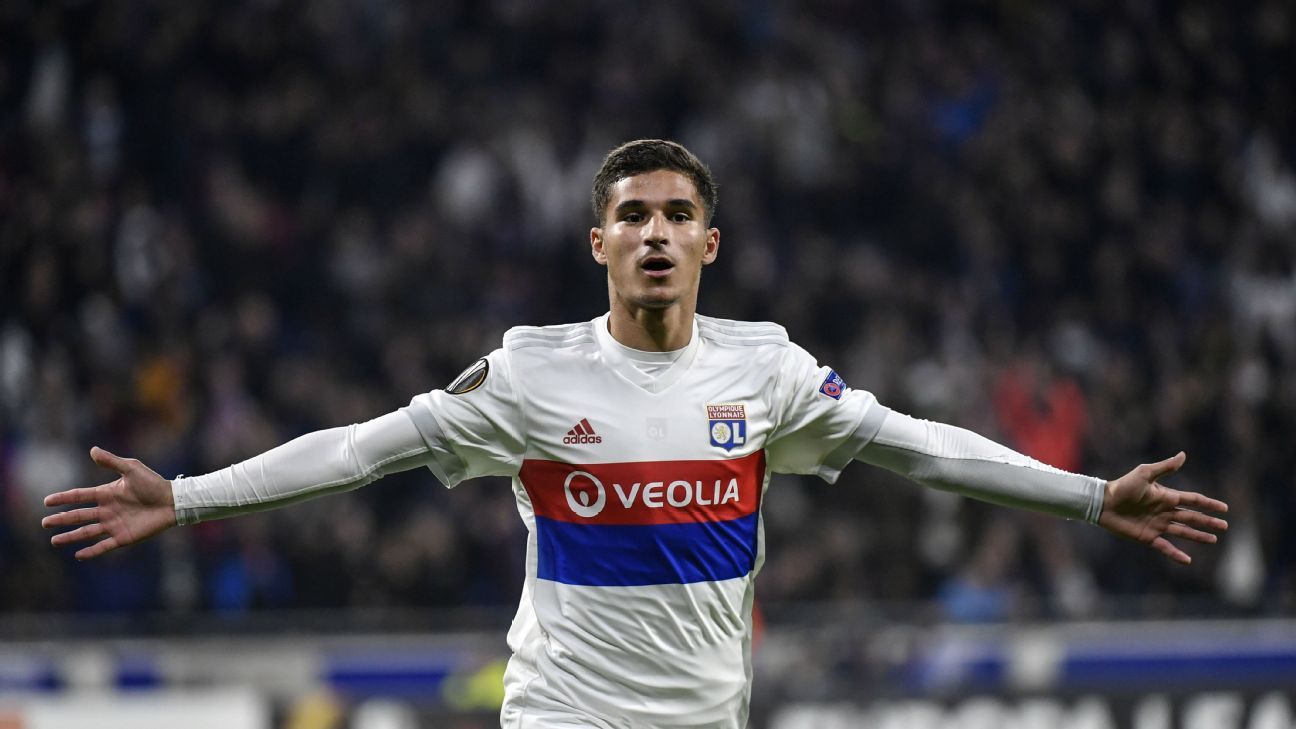 Lyon wonderkid Houssem Aouar is attracting plenty of interest from England, with Arsenal joining Liverpool and Manchester City in the race for his signature, according to The Sun.

The 21-year-old is considered one of the hottest properties in Europe and as well as a trio of English clubs queueing up to sign him, he’s also being watched by the likes of Juventus and Real Madrid.

Aouar impressed in action against Manchester City in the Champions League last season and was even described by City boss Pep Guardiola as “incredible.” This season he’s scored three goals in 25 appearances in all competitions.

Liverpool are supposed to be long-term admirers of the France Under-21 international and are even reported to have started talks with his representatives, though this week’s news that the Premier League league leaders are halting all contract talks and transfer activity could see that contact come to an end.

Arsenal boss Mikel Arteta is also keen, though Arsenal’s small transfer budget could be an issue.

Kavanagh, 16, is the son of ex-Ireland international Graham Kavanagh and has been scouted by Arsenal and Chelsea, Newcastle and Leicester City.

Now The Sun claims that Scottish giants Celtic are also watching him.

09.50 BST: Bayern Munich have signed Thomas Muller up to a new deal.

09.20 BST: Liverpool will be looking to add some depth in the summer and the Borussia Monchengladbach.

First up, to bolster their midfielder, they want Switzerland midfielder Denis Zakaria, who has also been linked with Manchester United and Tottenham.

Then, as a backup for Roberto Firmino, they’ll target 22-year-old forward Marcus Thuram — the son of France legend Lilian.

With the coronavirus pandemic affecting clubs financially, it’s unlikely that Valencia will get the €60m they were seeking for the Spain international. Rodrigo was twice close to leaving Valencia in recent transfer windows, with Atletico Madrid and Barcelona among the clubs that made offers to sign him. However, both deals fell through and Rodrigo, Valencia’s biggest asset, remains at the club.

Valencia were hoping to use Euro 2020, now moved to 2021, as a window to showcase the 29-year-old. However, according to Superdeporte, the club will now focus on extending Rodrigo’s contract beyond his deal which expires in June 2022.

Nunez, 23, is available for just €30m due to a release clause in his contract and is highly-rated in Spain.

The Lauro Martinez to Barcelona story continues to rumble on, but Sport have raised the stakes by reporting quotes from former Inter Milan president Massimo Moratti, who has suggested the club might attempt to take Lionel Messi in the other direction as part of the deal.

Inter are resigned to the fact that they will likely wave goodbye to Argentine striker Martinez, with the Blaugrana having chased him for months and the player seemingly keen to go. However, Moratti has suggested that the club could try and pull off an audacious swoop, or at least try and stall the deal by demanding they sign Messi in return.

“I don’t think [Messi] is a forbidden dream at all. Maybe it wasn’t even before this misfortune [the coronavirus outbreak],” he told Rai. “He is at the end of his contract and it would certainly be attempted to bring him [to Inter].”

It goes without saying that Barca would be unlikely to let him leave, while persuading a player who has spent his whole career at Camp Nou to go would, you imagine, prove tricky.

A more believable signing for Inter perhaps would be Pierre-Emerick Aubameyang, who has reportedly decided to leave Arsenal this summer, according to Gazetta dello Sport.

Aubameyang’s contract only has one more year left to run, which is one reason why Arsenal might decide to sell the striker if contract extension talks continue to falter.

The Gunners are keen to keep their captain and talisman, but so far talks between the two parties have not gone well, with Aubameyang seemingly unimpressed by the club’s transfer plans and seeking a new challenge.

Marca is reporting that AC Milan could cash in on left-back Theo Hernandez this summer, with a whole host of clubs interested in signing the former Real Madrid player.

Hernandez only moved to the Italian giants last summer, but he has impressed in the 25 games he’s played, scoring six goals in all competitions.

Real Madrid are unable to buy Hernandez back and didn’t insert a sell-on clause when they sold him, and so won’t be able to make any money should Milan decide to sell. All of which has got the Rossoneri thinking about profiting from a player who could help them strengthen in more pressing areas.

Barcelona and Arsenal are both interested in the left-back position, having shown interest in Paris Saint-Germain left-back Layvin Kurzawa, and so could be interested in Hernandez too, while Juventus and Manchester City are both said to be monitoring the situation.

Inter boss Antonio Conte is keen to take advantage. The Nerazzurri have been linked with Aubameyang for several months and with the player himself making overtures about leaving, that could now spark a tangible offer from the Italian capital.

– The Daily Mail reports that Chelsea and Arsenal are interested in signing Bayern Munich defender Jerome Boateng, who is out of contract in 2021. The 32-year-old could leave the German giants this summer and, if that’s the case, that could spark a bidding war between the London rivals. Boateng is out of favour at Bayern after he was fined for breaking coronavirus quarantine guidelines.

– The list of clubs interested in Valencia attacking prodigy Ferran Torres is growing, with Goal reporting that Manchester City, Atletico Madrid, Ajax, Borussia Dortmund, Juventus, Manchester United and Liverpool have all enquired with Valencia about the potential availability of the 20-year-old.