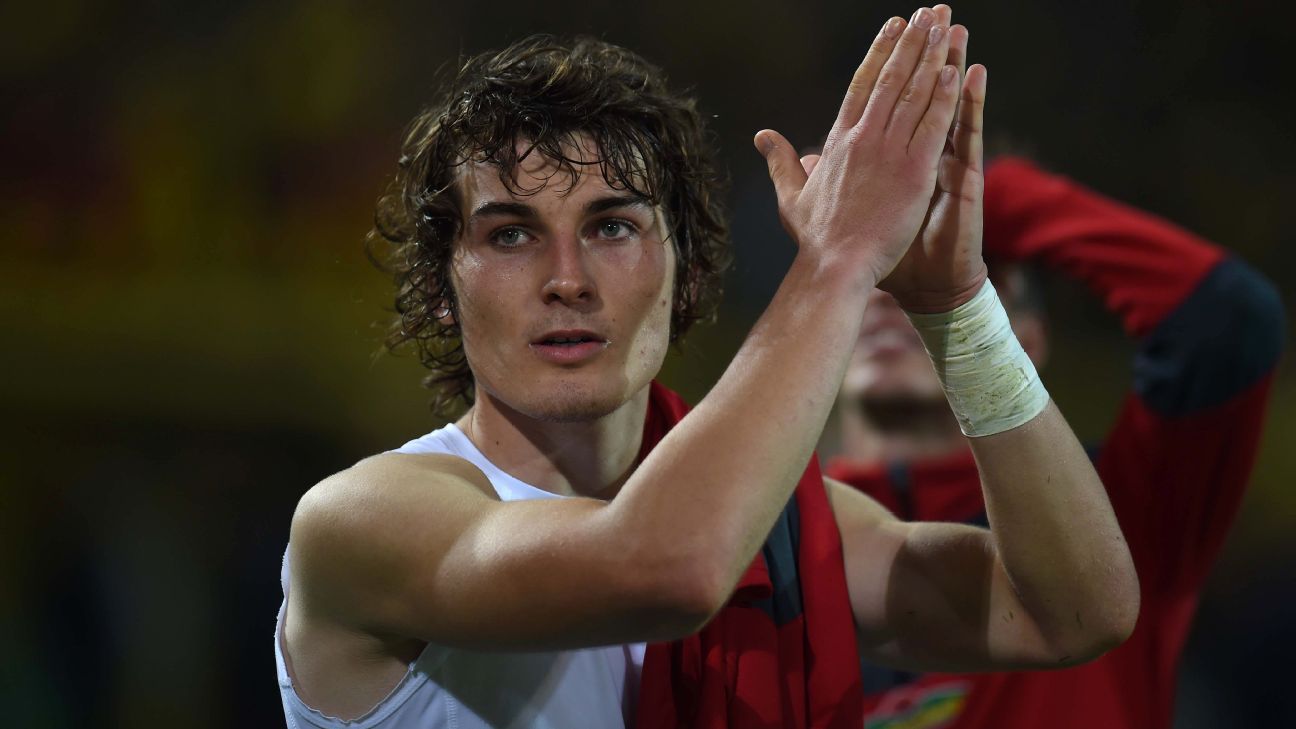 Arsenal are set to strengthen their defence as they line up a £35 million move for Freiburg centre-back Caglar Soyuncu, reports the Daily Mail. According to Soyuncu’s agent, Mustafa Dogru, there are “concrete talks” between the player and the Gunners, and “all that remains is for a fee to be agreed.”

The 22-year-old could be partnered at the heart of a new-look Arsenal back line by Borussia Dortmund’s Sokratis Papastathopoulos, as head of recruitment Sven Mislintat looks to equip Unai Emery with the tools to mount a serious Premier League challenge.

Mislintat’s rebuilding plans are also thought to include Sampdoria midfielder Lucas Torreira, who has previously been linked with a move to Juventus. The combative 22-year-old would certainly add extra quality in midfield, with the Gunners looking to finalise a deal before Torreira links up with Uruguay at the World Cup.

12.35 BST — DONE DEAL: And after reports that Watford were all set to wrap up Gerard Deulofeu‘s permanent signing from Barcelona, guess what they’ve done? They’ve wrapped it up:

✍️ | @gerardeulofeu has returned to #watfordfc from @FCBarcelona after signing a five-year permanent deal!#GerardsBack

12.15 BST — DONE DEAL: Borussia Monchengladbach have signed attacker Torben Musel from Kaiserslautern, with sporting director Max Eberl saying: “Torben Musel is a dangerous attacker and one of the most talented players in his age group. We’re extremely happy to have been able to sign him.”

12.00 BST: After Harry Kane put pen to paper on a new deal at Spurs, his club and England teammate Dele Alli is ready to do the same, according to the London Evening Standard.

It says midfielder Alli “is set to be the next Tottenham star to sign a new long-term contract,” with the club ready to “hand him a significant pay-rise and take him closer to £100,000-per-week.”

11.45 BST: Arsenal have held “concrete talks” with Freiburg about a move for centre-back Caglar Soyuncu but have yet to agree a fee, the player’s agent has said.

Mustafa Dogru told Turkish Football that Arsenal head of recruitment Sven Mislintat has been tracking Soyuncu and the Gunners are keen on a move for the 22-year-old Turkey international.

11.20 BST: Watford are set to confirm the permanent signing of winger Gerard Deulofeu this week after his loan spell at Vicarage Road last season, the BBC reports.

10.50 BST: Newly-promoted Cardiff City could soon seal a move for Norwich winger Josh Murphy, the Eastern Daily Press reports. Murphy had also been linked with Brighton and Fulham and is likely to cost the Bluebirds around £10 million.

10.40 BST: Wolves are set to conclude a loan deal for Benfica’s Mexico striker Raul Jimenez, according to the Mail, which reports that they “are expected to pay an initial £3 million loan fee for a forward who scored eight goals last season.”

10.20 BST: Erzgebirge Aue forward Pascal Kopke, the son of former Germany goalkeeper Andreas Kopke, is in Berlin ahead of a medical at Hertha, the club have said.

10.08 BST: Another to watch at the World Cup. The agent of Cristian Pavon has responded to TyC Sports’ reports that his client is close to leaving Boca Juniors for PSG and says that he wants to stay at least until the end of the Copa Libertadores.

09.47 BST: The agent of Inter Milan midfielder Marcelo Brozovic — a player previously linked to Arsenal, Chelsea and Liverpool — says that he has “several offers on the table, but they are not worth talking about because he has a great desire to play in the Champions League with the Nerazzurri. There will be time to talk about his future.”

09.38 BST: Barcelona have always got on well with Dutch players, and now Cat Radio join AS in saying talks for Ajax’s Frenkie De Jong have accelerated. You can read about him here.

09.32 BST: According to French media, there has been contract between Paulo Dybala and PSG. Guess that means that Edinson Cavani is on his way. Wonder if Dybala will let Neymar take all the penalties?

09.13 BST: Liverpool are closing in on the signing of Stoke winger Xherdan Shaqiri, sources close to the player told ESPN FC. His brother and agent had talks with Liverpool officials on Friday.

09.10 BST: One to watch at the World Cup: Sweden’s Emil Forsberg tells Bild that “I am not thinking about (a possible summer transfer) at all right now. I am only focused on the World Cup. We want to at least finish second in our group.” He probably is thinking out it though, and RB Leipzig are aware of this so are targeting 20-year-old River Plate left-back Marcelo Saracchi for around €13.5m.

09.01 BST: More Arsenal-grabbing-the-best-young-players-from-other-clubs. Barcelona’s 16-year-old left-back Joel Lopez has reportedly told the club he’s off to the Emirates and he’s out of contract this month (via SPORT).

08.46 BST: U.S. forward Bobby Wood could remain in the Bundesliga as Hannover 96 are interested in the Hamburg flop. The 25-year-old could join on loan after Hamburg were relegated, at least that’s what kicker says.

08.38 BST: Napoli are reported to be closing in on Bayer Leverkusen’s Bernd Leno as their new goalkeeper for next season. Could someone call Arsenal and let them know to get a move on?

08.27 BST: Dortmund and Arsenal have agreed terms for defender Sokratis Papastathopoulos, according to today’s print edition of kicker. However, the German club want the transfer to go through in the new financial year, beginning on July 1. Arsenal can wait… surely.

08.20 BST: Real Madrid have no coach but they know what they like… and will offer €150m for Lazio midfielder Sergej Milinkovic-Savic, according to Il Messaggero.

Gareth Bale has set his sights on a return to the Premier League if he leaves Real Madrid this summer, claims the Daily Mirror.

Bayern Munich had expressed an interest in the Welsh winger following his devastating cameo in the Champions League final, but he has reportedly turned down a switch to the German champions.

That could be music to the ears of Manchester United, who have made Bale a leading target as they seek to rein in Manchester City at the top of the table.

The 28-year-old is valued at around £100m, but the Independent claims Bale’s future won’t be decided until Real have settled on Zinedine Zidane’s replacement at the Bernabeu.

Chelsea could face a tough battle to hold on to N’Golo Kante this summer as Paris Saint-Germain look to bring the midfielder back to Ligue 1, reports the Sun.

New PSG boss Thomas Tuchel is a huge fan of the 27-year-old, who won back-to-back Premier League titles with Leicester and Chelsea in 2016 and 2017.

Tuchel has also made enquiries over the availability of Julian Weigl, whom he coached at Borussia Dortmund, but it’s believed that interest wouldn’t impact on a potential move for Kante.

The France international’s agent has reportedly met PSG sporting director Antero Henrique on more than one occasion over the past month as the two parties look to thrash out a deal before an official bid is submitted.

– Real Madrid are set to beat Manchester United to the signing of Lazio star Sergej Milinkovic-Savic, according to Il Messaggero. The Serbia international has been tipped to star at the World Cup following an impressive season in Serie A.

– Liverpool’s hopes of signing Roma goalkeeper Alisson have received a blow after it was reported that the 25-year-old is content to stay in Italy. The Liverpool Echo quotes Brazil goalkeeping coach and World Cup 1994 hero, Taffarel, as saying Alisson is “very happy” with his current situation despite being linked with an £80m switch to Anfield.

– Leicester face stiff competition for Norwich playmaker James Maddison, says the Daily Mirror. The Foxes hope to complete a £25m move for the 21-year-old but will have to beat off rival interest from Fulham and Everton.

– It looks as though Spurs have a free run at Aston Villa star Jack Grealish, with the Chronicle reporting that Newcastle are now unlikely to move for the 22-year-old. Rafa Benitez is known to be a big fan of Grealish, but the midfielder’s £30m price tag may force the Magpies out of a bidding war.