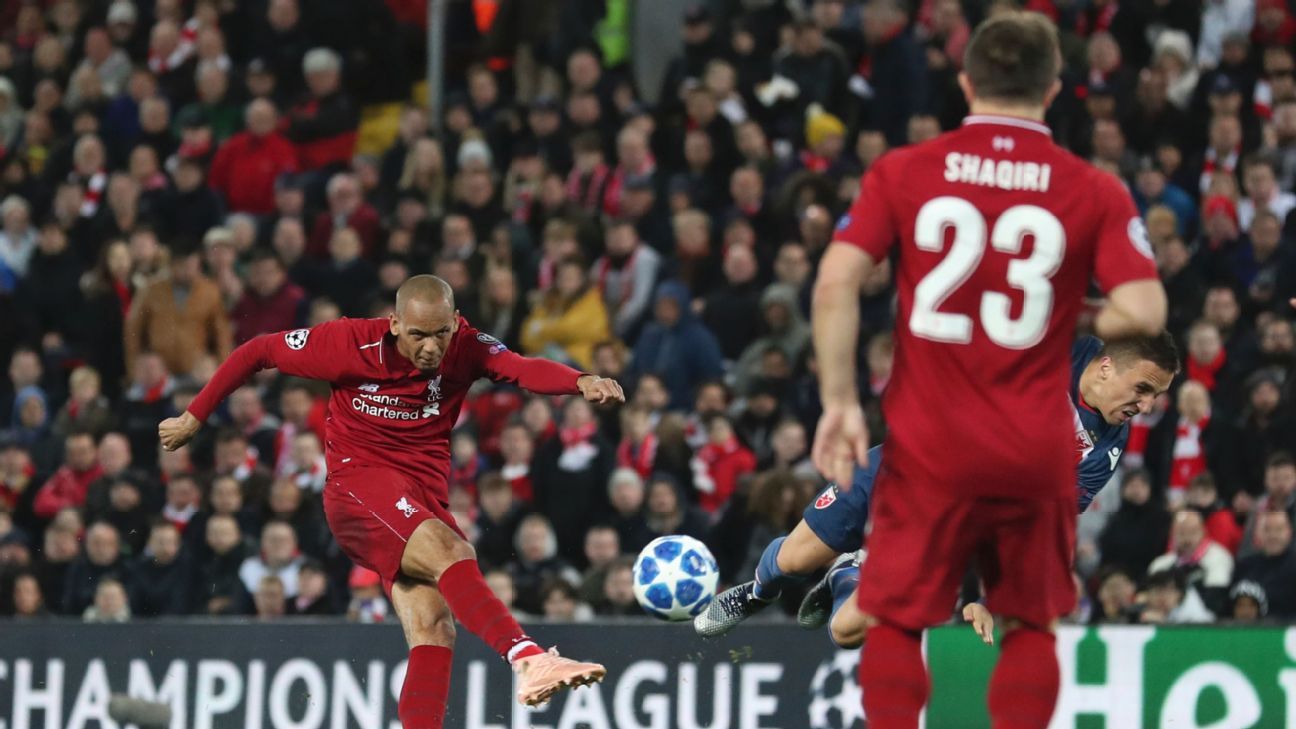 AC Milan are considering an “audacious” approach for Liverpool midfielder Fabinho, according to the Express.

Despite only arriving at Anfield in July, the Rossoneri reckon there’s a possibility they’ll be able to talk the Brazilian midfielder into jumping ship.

The club reportedly point to the fact that the 25-year-old has found first-team action hard to come by having endured a slow start to life at Anfield. As such, it’s being purported that Milan are willing to offer the player a January escape route.

09.35 GMT: River Plate president Rodolfo D’Onofrio has denied reports in the Spanish media that a deal has been reached with Real Madrid to sell midfielder Exequiel Palacios. Diario AS claimed that Madrid had already agreed terms to sign Palacios in the winter transfer window and that the deal would be completed as early as next week. “He has not been sold but there is an interest from Real Madrid in Palacios,” D’Onofrio told America TV.

09.20 GMT: Chelsea striker Michy Batshuayi has denied he wants to leave Valencia in January despite being left out of the squad last weekend. Marca have the quotes.

One of the clubs who would be interested if he were to leave would be Dortmund — where he scored tons of goals last season on loan. However, Mundo Deportivo claim the Germans are to exercise their option to buy Paco Alcacer from Barcelona on permanent basis. So that’s that.

08.45 GMT: Juventus forward Paulo Dybala says he is not distracted by rumours of interest from Manchester United. The Argentina international has been linked with a move to Old Trafford by outlets in Italy.

“I’m not thinking about the transfer market, now I’m very happy at Juventus and the objective is simply to win all the titles here,” Dybala said. “We’ve played two [Champions League] finals in four years and I think we showed in previous years we’re capable of winning, but we had some bad luck, especially last year against Real Madrid. We’ve not had the luck to win the cup yet so let’s hope we can this year.”

James surplus to requirements at Bayern

James Rodriguez will soon be free to move to the Premier League after Bayern Munich decided they aren’t interested in converting the Colombian forward’s two-year loan move into a permanent one, says The Sun.

The 27-year-old is expected to return to parent club Real Madrid next summer as the Bavarian outfit stage a mass overhaul of their ageing squad.

Arsenal, Manchester United and Chelsea have all expressed an interest in the recent past, and all three clubs are reportedly still keen to make a move as and when the opportunity presents itself.

– Samir Nasri is currently training for free at West Ham in the hope of securing a short-term deal with the club from January onward, so claims The Sun.

– Juventus rejected the chance to sign goalkeeper Keylor Navas as part of the deal that took Cristiano Ronaldo to Turin, reports The Mirror.

– Barcelona general manager Pep Segura has admitted that Ousmane Dembele is struggling to settle but insists the club will stick by the France forward amid reports they are ready to move on from the 21-year-old.