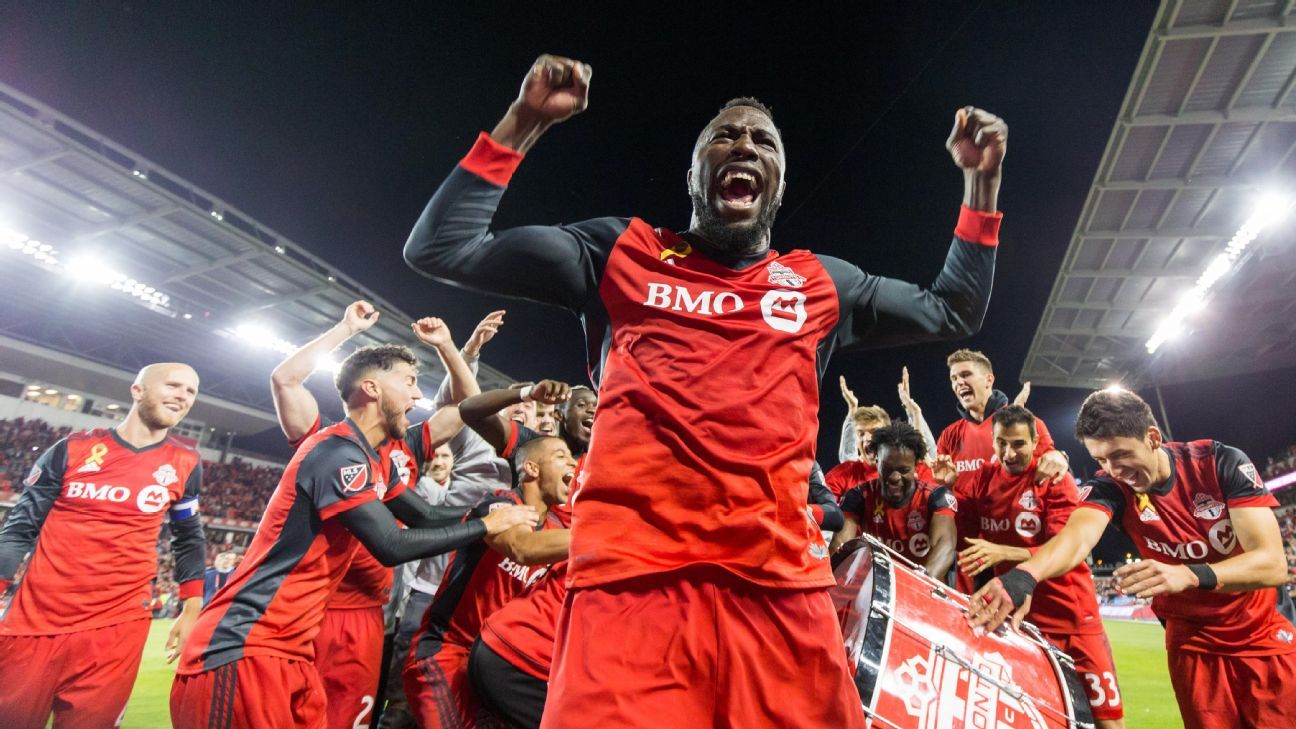 
With most teams in action twice during the week, there was little movement in the Power Rankings after week 32.

1. Toronto FC (no change): The two-game losing streak is a thing of the past after topping the New York Red Bulls 4-2. Supporters’ Shield winners with two games to spare? Impressive.

2. Atlanta United (no change): Their congested schedule finally caught up in the 0-0 draw at New England. Still, 16 out of 18 points in their six-game home-stand will scare playoff opponents.

3. New York City FC (+1): Patrick Vieira’s team rise a spot after a 1-0 win at Montreal and a 1-1 draw in Chicago. David Villa back on the scoresheet is a good sign.

4. Sporting Kansas City (-1): It was just one of those nights for Sporting KC in Saturday’s 1-0 home loss to Vancouver. Nothing to be concerned about though.

5. Seattle Sounders (no change): They looked really sluggish in the 2-0 loss at Philadelphia after a very good 3-0 home win over Vancouver.

6. Vancouver Whitecaps (no change): A rotated squad flubbed in Seattle, but they came back strong to hand Sporting KC their first home loss of the season.

8. Portland Timbers (-1): Diego Valeri’s nine-game scoring streak is over after a 2-1 loss at San Jose. Looked like an off night against a team desperate for three points.

9. Chicago Fire (+2): Bastian Schweinsteiger is back and the pieces are falling into place after a 4-1 road hammering of San Jose and a home 1-1 draw with New York City FC.

10. Real Salt Lake (-1): If RSL reach the postseason, they may look back at Kyle Beckerman’s last-gasp goal in the 1-1 draw at the LA Galaxy as the goal that got them there. Jefferson Savarino’s injury is real cause for concern though.

11. New York Red Bulls (-1): A 4-2 loss to Toronto was understandable, but the 3-3 home draw three days prior against D.C. United never should have happened. They’re lucky Montreal failed to take advantage.

12. Houston Dynamo (no change): This was supposed to be a home-cooked six-point week for the Dynamo, but they’ll have to settle for four after a 3-3 draw against the Galaxy and then a 2-1 win over Minnesota.

13. Philadelphia Union (no change): You could forgive the 3-0 midweek loss in Atlanta. It’s happening to everyone. At least they had a nice turnaround in beating Seattle 2-0.

14. New England Revolution (no change): Had to get three points against a tired Atlanta after losing 6-1 to Orlando, but alas, the Revs could muster only a 0-0 draw.

15. FC Dallas (+3): The Texans rise in the rankings thanks to a four-point week, including a 2-0 win over Colorado, their first since late July. That game in hand will be crucial to their playoff hopes.

16. San Jose Earthquakes (no change): San Jose followed up last week’s 4-0 loss to DC United with… a 4-1 loss to Chicago. Defense then delivered in the 2-1 win against Portland.

17. Montreal Impact (-2): It was all there for Montreal to make up ground on the Red Bulls. Instead they drop a pair to NYCFC and Colorado. At least Nacho Piatti is back in 2018.

18. Minnesota United (-1): Minnesota were pretty tame in attack in losing 2-1 in Houston. Still, credit to Adrian Heath for having his team playing hard until the end.

19. Orlando City SC (+1): After thrashing the Revs 6-1, Orlando could have put some pressure on the Red Bulls but were foiled by FC Dallas goalkeeper Jesse Gonzalez in Saturday’s 0-0 draw.

20. D.C. United (-1): Nice to see some fight from D.C. United in taking two points away from the Red Bulls in midweek before reverting to form, losing 2-0 at Columbus.

21. Colorado Rapids (no change): If it was anyone else besides Alan Gordon, you’d have to say celebrating a stoppage time winner when you are already eliminated from the playoffs is a bit overboard. But it’s Gordo, and thus, it’s entertaining.