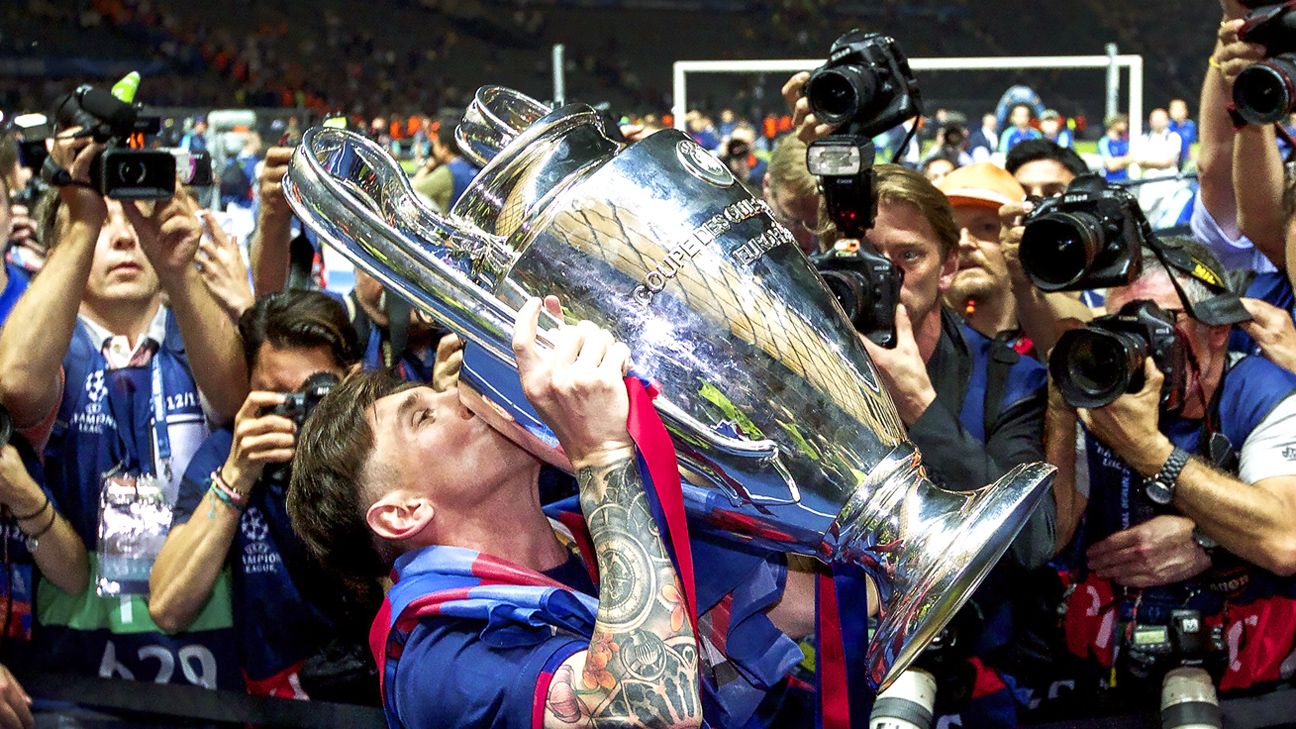 
When he was young, Victor Font would look away from the Camp Nou pitch when the opposition attacked. The supporters sat around him would laugh. It didn’t matter what game it was, he refused to look when Barcelona were under pressure.

In fact, some of his best memories from a childhood supporting Barca are of the Joan Gamper Trophy, an annual friendly which is used to introduce the squad for the forthcoming season. Font remembers those games vividly. In an era of no social media and with fewer games on television, he recalls the excitement and anticipation of being able to see the team, and any new players, for the first time.

The Joan Gamper Trophy does not carry that buzz for the modern, more spoilt Barca fans. Football has changed a lot in the last 30 years, especially in Barcelona, and many supporters now are more interested in who Barca are going to sign than a friendly against Santos.

The game is changing quicker than ever in most areas. With the influx of money at clubs like Manchester City and Paris Saint-Germain and the introduction of technology, with VAR one of the stars of the World Cup, it is an interesting time to be involved in football.

Not only do the Catalan club, owned by 150,000 members so unable to count on the financial support of a tycoon or a state, need to work out how to compete with the new money infecting the game, but they’re also on the cusp of a huge generational change. By the time the new season starts, Gerard Pique, Sergio Busquets, Ivan Rakitic and Luis Suarez will all be in their 30s. Andres Iniesta and Javier Mascherano are gone.

Perhaps more importantly, though, Lionel Messi has just turned 31. Who would want to be the president to oversee the post-Messi years at the club? Well, Font would.

“That’s the challenge, right?” Font, a 45-year-old media and telecoms entrepreneur from Catalonia, tells ESPN FC when asked how he would handle the eventual loss of Messi, the five-time world player of the year.

It’s a prospect which may face Argentina after this summer’s World Cup but it’s one which Barca fans really don’t want to imagine. For any incoming president, though, you have to be realistic. Messi won’t be around forever and there must be plans for life after his genius.

Font, who announced earlier this month that he will run to replace Josep Maria Bartomeu as the club’s president at the next elections, which will be no later than 2021, knows it won’t be easy to remain successful once Messi is gone.

Barca have won four of their five European cups since he made his debut. They have won nine of their 25 league titles, too. That’s 36 percent of their La Liga trophies in little more than a decade. Obviously, Messi hasn’t done it all on his own (although he has scored a staggering 552 goals in that time), but with Iniesta’s departure, he’s the last man standing from the squad which won the 2006 Champions League. He’s been a constant throughout a 12-year spell of success which many apply his name to.

“As long Messi is here, we compete,” Font continues. “But the question is how do you replace this generation? You either bring players up from the academy — but only one player has solidified his position in the first team in five years, Sergi Roberto — or you sign players.

“If there are none coming up, you need to sign. If you need to sign, you need to compete with PSG, Chelsea, Manchester City, Manchester United, Real Madrid, Bayern Munich … in an inflationary market. We were able to sign [Ousmane] Dembele and [Philippe] Coutinho because of the €220 million we got for Neymar. But let’s see this summer. We seem to still have €100m, that’s been public with the [Antoine] Griezmann stuff.

“But the question is what’s going to happen in the coming weeks? Because if you need to start paying €100m, €150m, €200m, €250m, where will the money come from when you are using 80 percent of your revenue just to pay the salaries of your first team? That is crazy. I mean, from a financial perspective, going above 60 percent of your revenue on salaries is just crazy.”

Font says the “risk” of further mismanagement of the situation could see Barca end up as the new AC Milan: one of the game’s greats that failed to adequately replace a brilliant but ultimately ageing team and lost their place at the top of the football pyramid. The Italian side have just been banned from European competitions next season for breaching UEFA’s financial fair play rules.

So, what do Barca do? Remaining competitive in a post-Messi world will not be easy and will almost certainly be expensive. The ideal, Font says, is that more Messis and Iniestas come off the production line, but the reality is that they will have to compete in the transfer market with PSG, City and Madrid for the world’s best players.

“Barca don’t intend to make a profit with the ownership structure we have,” he says. “We just want to generate as many financial resources as needed to have the best team and win as many titles as we want, period. It’s not like owners at other teams who might have a financial return perspective.

“The latter is where I believe the opportunities sit, especially for the large brands in football. In my view, because of the intermediation of many other companies, the big multinationals in the world of football are taking the lion’s share of the value that’s created in the industry. That’s why the top clubs, from a revenue perspective, are medium-sized companies. You see brands like Barca and Man Utd, they turnover €700m, €800. Here in Catalonia, there are 80 or 90 companies which make more than that: how can this be?

“It’s because we have this B2B business model, where historically a couple of contracts — the TV rights and the shirt deal — generate close to half your budget. Every cycle the contracts are better, but there’s a limit to that.”

In that sense, Font believes Barca have “wasted” Messi’s generation. He feels they’ve missed the chance to maximise their income by failing to lead the way in the technology market. The recent Griezmann documentary, produced by Pique’s company, is something he thinks should be coming from the club — “Although not that exact example because it played with emotions.”

He adds: “The opportunity is to see how you can use technology to go more direct to consumer and sell content, exclusive content, specific services, specific products, to the millions and millions of fans that these very powerful brands have all over the world.”

Before thinking of the impossible, replacing Messi, Font wants to change the way the board works. For too long, he says, the club has not fulfilled its potential because the boardroom has been filled with people with the same profile: friends of the president who have “enough wealth” to put the banker at ease in the case that things go horribly wrong (they haven’t, yet).

He would love to have ex-players like Xavi Hernandez involved in his campaign leading the sporting side of things, but, in general, he envisages a more modern board elsewhere. Not necessarily younger, but think of the setup at some of the world’s leading businesses: Apple, Netflix, Amazon …

“It’s going to be difficult to come up with the magic formula but it’s about building the right team,” he explains. “You need a board that has the capabilities required to handle such transformation.

“You need people on the board that know about the industry of entertainment, technology and digital so that this B2B to B2B2C transformation becomes a reality and we can come up with innovative models and so on. That’s the challenge. The type of people that we need at board level are typically people that in the current model don’t feel attracted to [work at the club].

“It’s like building a board for one of the top entertainment companies in the world.”

Life after Messi, then, is unlikely to be straightforward.

“When Barcelona don’t have Messi, they will have problems because it’s impossible to find another player like him,” Diario Sport journalist Toni Juanmarti tells ESPN FC. “No player will be enough for [Barca], because they will always be compared to Messi.

“We could see a less successful Barca in the immediate years after Messi retires because we have won all these things recently because of Messi and without Messi it will be difficult. You can compete, you can reach finals, but the other step is because of Messi.”

Is that something Font’s prepared for?

“I think we need to start managing expectations somehow,” he says. “When you realise that, as Barca fans, we have been so used to winning that now you win a double and it’s a failure. Look at Manchester Unitedc and Arsenal. Realising how tough winning is is something we need to get started. The problem is we will only realise when we face it.

“What we are trying to do is to make people understand that the challenge to remain competitive is enormous — winning is even more difficult. I hope that if we do things right, we will be able to continue to compete but, obviously, once you don’t have the best player history with you [Messi], that will have an impact. It’s our aim, our will, our ambition to try to minimise such impact.

“We need to go back to the roots, to what made us great: sticking to the model and, eventually, that will allow us to continue competing.”