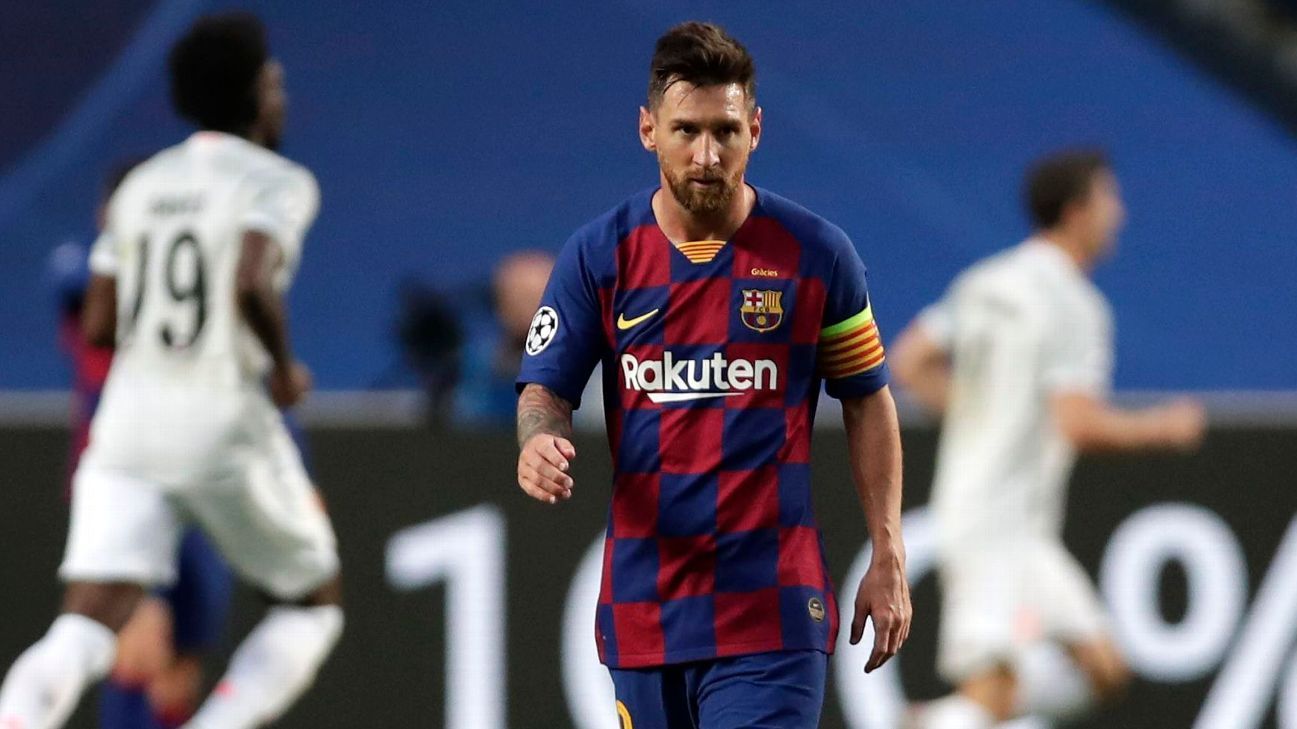 TOP STORY: Messi sees his future away from Barcelona

Lionel Messi has told new Barcelona boss Ronald Koeman that he is more likely to leave Camp Nou than stay, according to Catalan radio station RAC1.

Messi reportedly cut short his holiday to meet with Koeman on Thursday, and though the Argentina international remains under contract for one more year, he is believed to have dealt the club a fresh blow just days after their 8-2 defeat to Bayern Munich in the Champions League quarterfinals.

ESPN sources said new Barcelona boss Koeman and Messi have met, and that the club is calm about Messi leading the new project on the pitch under the guidance of the former Netherlands coach.

Koeman himself said that he wanted the opportunity to sit down with the No. 10 and explain his vision, but now he faces having to persuade the 33-year-old to stay.

The news has of course put other clubs on red alert, with Paris Saint-Germain and Manchester City the only realistic targets.

– Stream ESPN FC Daily on ESPN+ (U.S. only)
– Hunter: How Koeman’s Barca dream could be nightmare

Arsenal and Juventus are said to be discussing a swap deal that would see Alexandre Lacazette head to Turin and Federico Bernardeschi move to London.

That’s according to the Daily Star, which reports Juve are leading the swap as they look to add Frenchman Lacazette to their attacking armoury, and who have even reportedly opened talks with the Gunners despite the fact that Wolves striker Raul Jimenez remains the Bianconeri‘s top target. Lacazette is yet to agree an extension to his contract at the Emirates, which currently runs out in 2022.

Arsenal, of course, are still waiting for Pierre-Emerick Aubameyang to sign an extension to his deal, and if they can persuade the Gabon striker to stay then they would be more willing to let Lacazette move, particularly if it meant they could bolster their midfield.

Arsenal see Bernardeschi as the perfect addition to an area currently in need of improvement.

While some sources are suggesting that Lille defender Gabriel Magalhaes is set to undergo a medical at Arsenal in the next few days, Italian journalist Gianluca Di Marzio believes Manchester United have joined the race for his signature.

Napoli are also believed to be interested in Magalhaes’ services, though Arsenal were supposed to be on the verge of adding the consistent central defender to their back line. Indeed, Lille president Gerard Lopez told TalkSport radio station that he believed Magalhaes would choose between Arsenal and Napoli in the next 24 hours.

However, it would appear Manchester United are hoping to hijack Arsenal’s move, along with PSG.

Both Arsenal and Manchester United are keen to bolster their defences ahead of the new season, while PSG are looking to replace the outgoing Thiago Silva. Napoli, meanwhile, are keen to sign a central defender with Kalidou Koulibaly expected to leave.

– Leeds United are hoping to sign Valencia striker Rodrigo this summer, reports Di Marzio. Marcelo Bielsa, who is reportedly on the verge of agreeing his own stay at Elland Road, is keen to strengthen his Championship-winning squad before his side faces Liverpool on the opening day of the season. The 29-year-old Rodrigo scored seven goals in 34 appearances for Valencia last season.

– Aston Villa are preparing a bid for Brentford forward Ollie Watkins in the next few days, reports the Daily Mail. Watkins, they say, is Villa’s top target and is valued at £25 million by the Championship club after he scored 26 goals for the Bees in all competitions last season, while Villa’s bid is reportedly closer to £18m and is thus likely to be rejected,