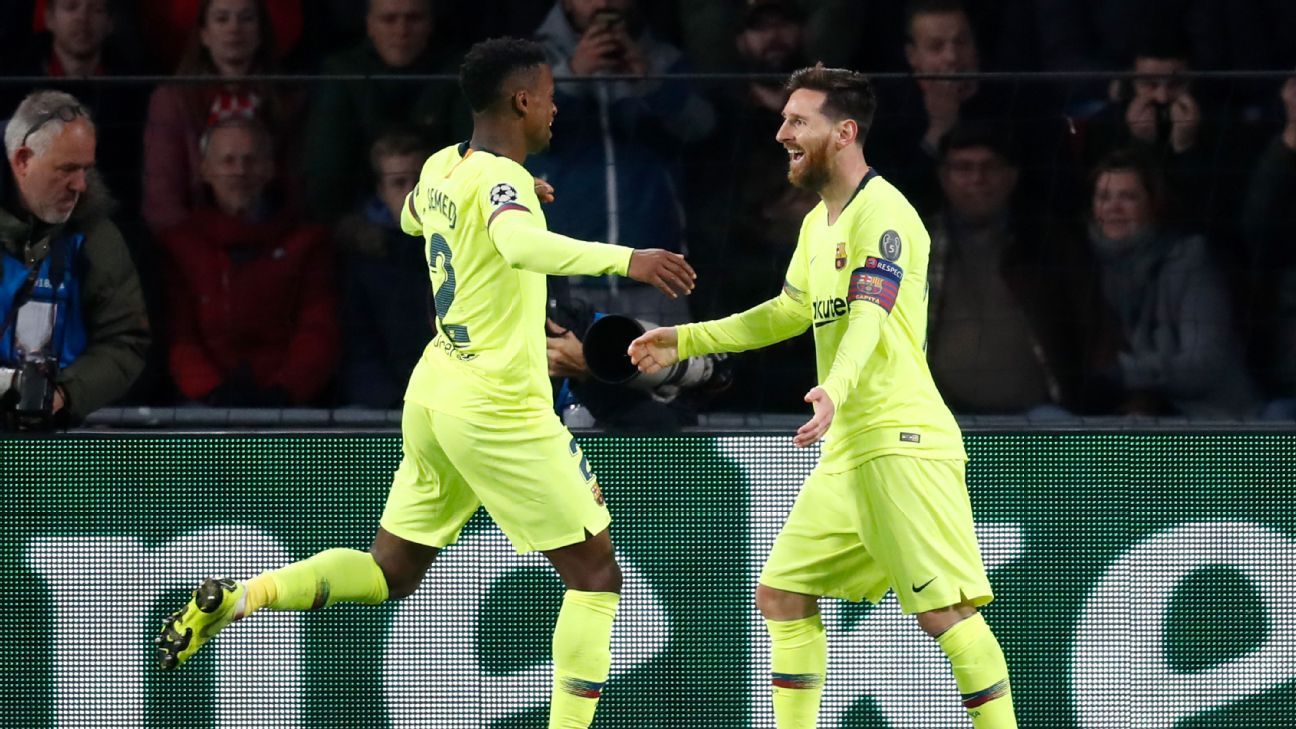 
EINDHOVEN, Netherlands — Barcelona sealed top spot in their Champions League group for a record 12th consecutive season with a 2-1 win away at PSV Eindhoven on Wednesday.

Lionel Messi opened the scoring in the second half with a move he started and finished in stunning fashion.

The Argentine then set up Gerard Pique for the second before Luuk de Jong pulled one back for the home side late on to set up a nervy finale.

Ernesto Valverde spoke about the importance of finishing top of the group and in that sense it was a case of job done in Holland. Messi was mesmeric once again — and everywhere — in the absence of Luis Suarez, and Ousmane Dembele produced another encouraging performance.

The Dutch side may feel they deserved at least a point. They hit the woodwork three times in the first half and were foiled more than once by Marc-Andre ter Stegen.

It’s easy to look at Barca’s defence — Samuel Umtiti was a late dropout as he continues to struggle with a knee problem — but the midfield was not great here. Ivan Rakitic was off form and Arturo Vidal focused on attacking, leaving Sergio Busquets isolated at times.

6 — Valverde said he would not experiment, despite having already qualified, and he stuck to his word. Messi played as a false 9 with Suarez injured and he was flanked by Dembele and Philippe Coutinho. However, while Valverde was right to respect the competition, it felt like the perfect game to give more minutes to youngsters like Malcom and Carles Alena.

GK Marc-Andre ter Stegen, 7 — Looked more nervous with his feet than he has in the past, perhaps lacking a bit of confidence due to Barca’s shaky defensive record. Still made a number of important saves, though, to ensure victory for his side.

DF Nelson Semedo, 6 — His pace is an asset in attack and defence but he still looks a little unsure of what to do when on the ball. With Sergi Roberto out for a month, he will look to use the coming weeks to nail down his starting place at right-back.

DF Gerard Pique, 6 — Scored Barca’s second with what he claimed afterward was a training ground routine, deflecting home Messi’s free kick. Struggled with De Jong in the air, though, with the PSV striker allowed too much space for his goal.

DF Clement Lenglet, 6 — Returned to the side in place of the injured Umtiti and generally did well, as he has done during his countryman’s prolonged absence.

DF Jordi Alba, 6 — A slow start but improved after the break, although he was not at his explosive best going forward.

MF Sergio Busquets, 6 — Made a disastrous start, losing the ball and then giving a free kick away on the edge of the box. All alone in midfield at times, he struggled to deal with PSV’s pressing.

MF Ivan Rakitic, 5 — Returned from a hamstring injury picked up while playing for Croatia but looked a bit rusty in the first half. Gave the ball away cheaply and only the post prevented him from being punished.

MF Arturo Vidal, 6 — Spoke before the game about being in his best form of the season and produced an energetic performance in the Barcelona midfield. Had two efforts cleared off the line in the space of two first-half minutes.

FW Philippe Coutinho, 6 — First game back after a three-week injury layoff. Did OK, but Barca will hope for more as he regains his match fitness.

FW Lionel Messi, 8 — Wasn’t seen much in the first 20 minutes but was the best player on the pitch from there on. In theory playing as Barca’s most central forward, he popped up all over the place, orchestrating play. Scored his sixth goal in the Champions League this season with a move he started on the halfway line before setting up Pique with a well-rehearsed set play.

FW Ousmane Dembele, 7 — Played well, setting up Messi’s goal and causing problems with his trickery. Will be disappointed not to have got on the scoresheet. Saw his best chance saved by Jeroen Zoet.

MF Malcom, 6 — Came on for the final 20 minutes, firing over after being fed by Messi late on.

MF Denis Suarez, N/R — Made just his second appearance in all competitions this season, coming on for the final 10 minutes in place of Dembele.

Hertha Berlin’s Windhorst promised Bundesliga glory. So what went wrong?
PSG’s Lionel Messi again out with injury, doubtful for Man City clash
Real Madrid’s Karim Benzema is getting better and making a case to be the best in the world
Flamengo are eyeing Copa Libertadores final after win over Ecuador’s Barcelona
Cádiz vs. Barcelona – Football Match Report – September 23, 2021