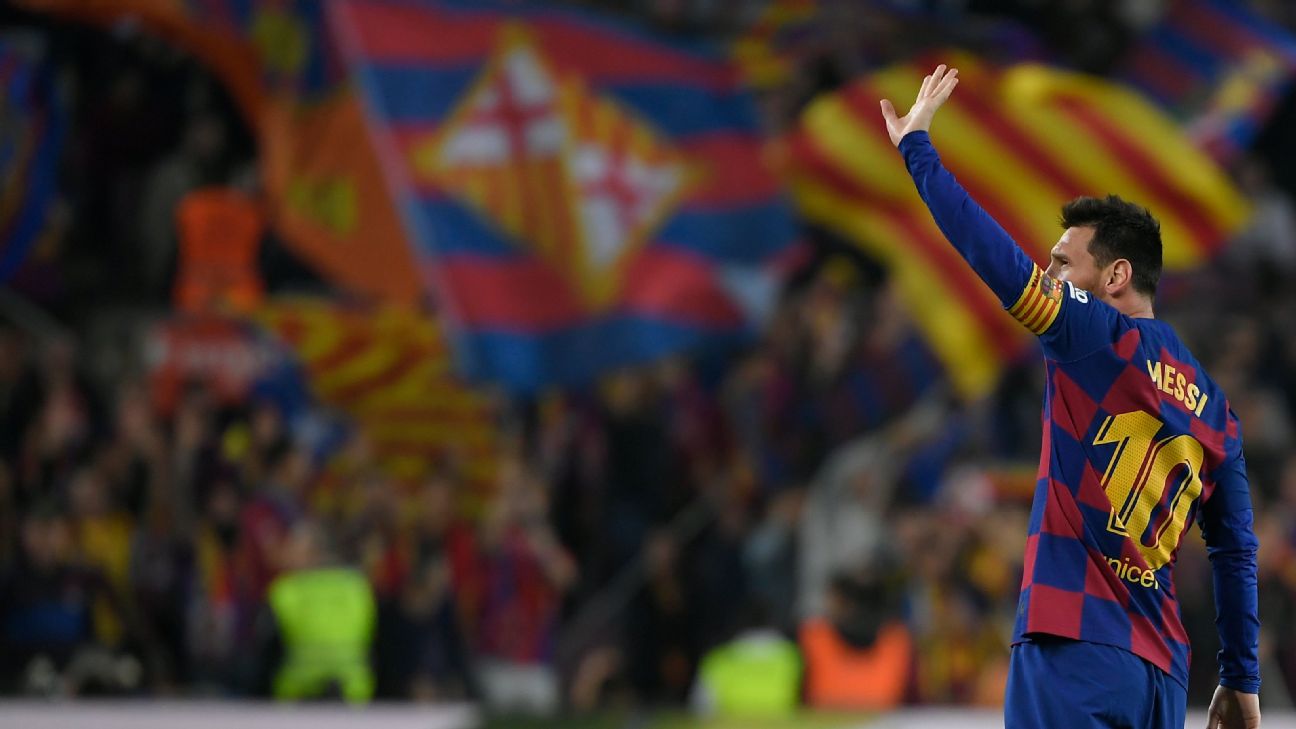 
BARCELONA — Lionel Messi was at his vintage best on Tuesday as he scored two and set up two more in Barcelona’s 5-1 thumping of Real Valladolid that moved them back to the top of La Liga.

Valladolid’s Kiko Olivas cancelled out Clement Lenglet‘s second-minute opener at Camp Nou before the Messi magic began. He set up Arturo Vidal with a sublime pass, and then scored a stunning free kick to help Barca into a two-goal lead at the break.

Messi then added the fourth, hammering home a volley from the edge of the box, before turning creator for Luis Suarez to round off the scoring.

This was Barca’s seventh win on the spin in all competitions since the defeat at Granada. It’s no coincidence they’re finding their feet now that Messi is back from injury. If the Argentine stays fit — and in this form — no one can keep up with them in La Liga. They’re back on the top of the pile for now, at least until Granada play Getafe on Thursday.

Frenkie de Jong really is growing into his more advanced role in the middle too, while Vidal seems to have found his goal-scoring touch when he plays this season.

He scored again but before that Suarez had once again been quiet. You can’t criticise his statistics — eight goals this season and now the fourth top scorer in the club’s history — but there remains a debate about whether Barca would be better off at least trying a different approach in attack.

6 — Ernesto Valverde took the opportunity to rest some players with three games in a week. A trip to Levante on Saturday is followed by a Champions League game against Slavia Prague. With that in mind, Arthur Melo was left out of the squad, Antoine Griezmann was left on the bench and de Jong was taken off after an hour. There will be more changes across the next seven days. Maybe Carles Alena and Carles Perez, unused substitutes here, will even get a chance.

GK Marc-Andre ter Stegen, 6 — Might take some of the blame for the Valladolid goal, as he failed to deal with a free kick whipped low into the box, but he was unsighted.

DF Nelson Semedo, 6 — Improved as the game went on, but looked nervy for the first 30 minutes. Ended the match at left-back.

DF Gerard Pique, 7 — A solid performance from Pique, who looked desperate for a goal late on as he joined in every Barca attack.

DF Clement Lenglet, 7 — Even he looked surprised to see his strike deflect into the back of the net off the bar to open the scoring. It was his third goal for the club.

DF Jordi Alba, 6 — An important shift on the left flank for Alba, who still is building up minutes after several weeks out with an injury.

MF Sergio Busquets, 7 — A comfortable evening for the midfielder. Didn’t do a lot wrong and pressed enthusiastically in the Valladolid half.

MF Arturo Vidal, 7 — Handed a rare start and perhaps didn’t do enough to suggest he should take Arthur‘s place in the side, but Barca can benefit from him off the bench. His energy and forward runs add something different. Scored his third goal of the campaign.

MF Frenkie de Jong, 8 — Drives forward with the ball with real intent, and it genuinely looks impossible to tackle him at times. Just as the opposition thinks he is going one way, he changes direction.

FW Lionel Messi, 10 — Not much more can be said. It wasn’t just that he scored two and made two, it was the sheer quality of each goal and each assist. And of the nutmeg that he produced on Oscar Plano. And the other one he produced on Sergi Guardiola. We could be here all night going over his best bits.

FW Luis Suarez, 6 — Got his eighth goal of the season, but the doubts still will exist about how much he should be playing and whether Barca would be better playing Griezmann — or someone else — through the middle.

FW Ansu Fati, 5 — Nothing came off for the teenager, who will turn 17 on Thursday. His decision-making was poor, and he missed his best chance when set up by Messi.

MF Ivan Rakitic, 6 — Created Messi’s second goal with a really good pass after being given a generous reception by the home fans when he was brought on.

FW Antoine Griezmann, 5 — Not able to get into the game on the left after coming on for Ansu for the final 20 minutes.

DF Sergi Roberto, NR — Made his return from injury with a late cameo at right-back.