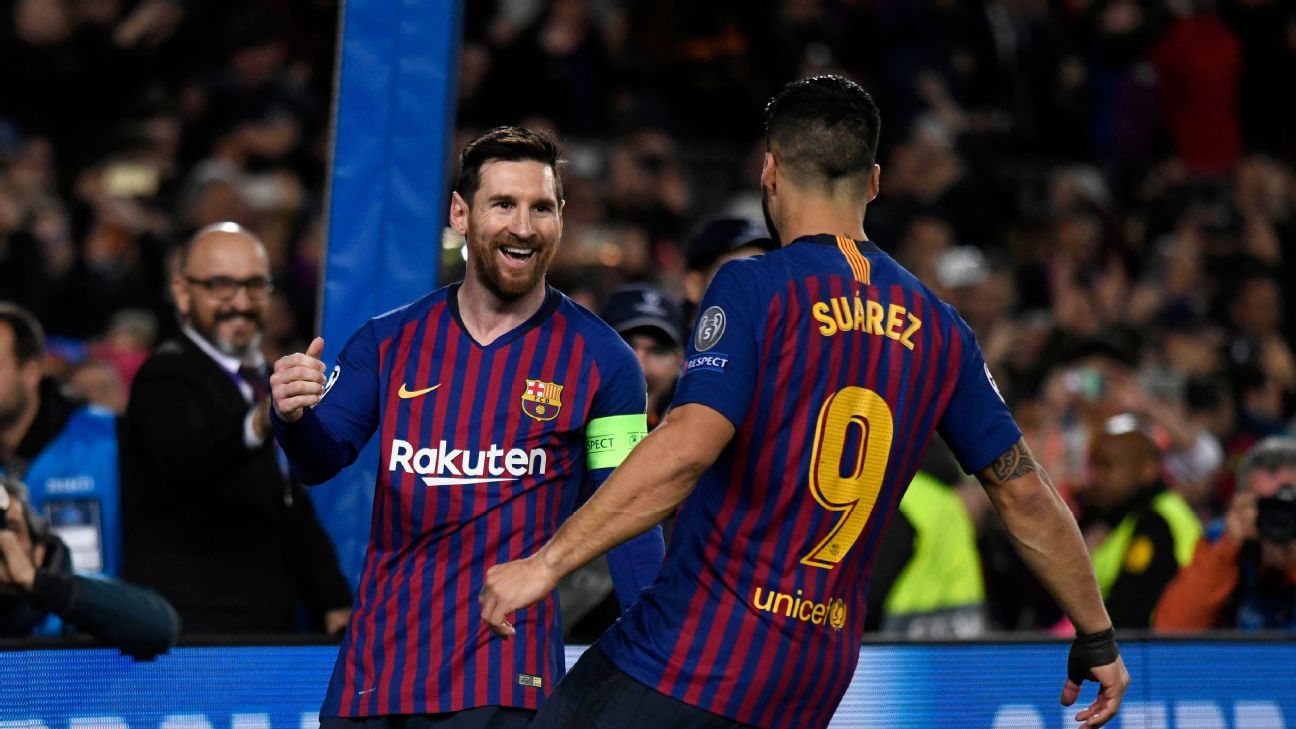 
BARCELONA, Spain — Lionel Messi scored two and assisted on two as Barcelona swept aside Lyon 5-1 after a goalless first leg in France to reach the Champions League quarterfinals for the 12th season running.

Messi gave Barca the lead from the penalty spot before Philippe Coutinho doubled their advantage before half-time after good work from Luis Suarez.

There were some nervy moments for the home side in the second half when Lucas Tousart pulled one back for Lyon but Messi turned the screws late to ensure there would be no upset at Camp Nou.

The Argentine scored Barca’s third goal before turning provider for the last two, setting up Gerard Pique and then substitute Ousmane Dembele.

With Messi in this sort of form, Barca will feel confident of winning a Champions League, which is now missing Real Madrid, Paris Saint-Germain and Atletico Madrid. Messi told supporters at the start of the season he was desperate to bring the European Cup back to Catalonia and so far he is on track to deliver on his word. Eight goals in six appearances in the competition does not even begin to describe everything he brings to this Barca side.

There was an impressive performance from Suarez, too, and a much-needed goal for the out-of-sorts Coutinho.

Coach Ernesto Valverde will also be impressed with what he saw in the first half. Barca led 2-0 at the break, but it could have been more such was the quality and intensity of their performance in that opening 45 minutes. Maintaining that level for 90 minutes is the next challenge.

For a few second-half half minutes, Barca looked under pressure. After Tousart had made it 2-1 — following a lengthy VAR review — Lyon were the better side. They didn’t really take advantage of the chances they had, though, and Messi stepped up to kill the French side’s hopes of a comeback. Those fragile minutes show that this Barca side remain far from unbeatable and can be vulnerable at times.

7 — Valverde reacted to Lyon’s goal and the growing pressure well, which suggested he has learned from last season’s shock defeat to Roma. The decision to bring on the pace of Dembele in attack and the bite of Arturo Vidal in midfield produced almost immediate dividends.

GK Marc-Andre ter Stegen, 6 — Could do little about the goal following a mad scramble that played out in front of him. Other than that, did what he had to do, but other than one late save low to his left, he wasn’t really tested.

DF Gerard Pique, 7 — Another decent performance at the back from the in-form centre-back. Also busted a gut to get forward to turn home Messi’s brilliant cross to make it 4-1.

DF Clement Lenglet, 7 — Blocked a Moussa Dembele shot at 1-0 to keep Barca in front and put in another assured performance alongside Pique, save for picking up a booking for a late challenge on Nabil Fekir. Samuel Umtiti‘s got his work cut out for himself to get back into this Barca side.

DF Jordi Alba, 6 — Lively in attack, linking well with Suarez and Coutinho. Didn’t have too much demanded of him in defence. Bigger challenges might well wait in the last eight.

MF Sergio Busquets, 6 — Composed on the ball but caught pondering on it a couple of times.

MF Ivan Rakitic, 7 — Another underrated performance in defence, if a more subtle one in attack on this occasions. Despite that, still conjured the assist for Messi’s second goal with a smart pass through the middle of the pitch.

MF Arthur, 7 — Brilliant on the ball in the first half, rarely giving it away and providing the base for Barca’s attacks. Played a fine pass to Suarez through the lines to help set up Coutinho’s goal.

FW Lionel Messi, 10 — A Panenka penalty, a goal that came after he sat down both Marcelo and Jason Denayer and two stunning assists. Another Messi night in Europe. He now has 36 goals and 21 assists in his 36 appearances this season. Not bad.

FW Luis Suarez, 8 — One of his best performances of 2018-19 — even if he is still without a European goal this season. Won the penalty that Messi scored, set up Coutinho and produced the turn of the match on a bamboozled Marcelo in the first half before dragging a shot just wide at the other end of the pitch moments later.

FW Philippe Coutinho, 6 — Given the nod due to Ousmane Dembele not being 100 percent fit and delivered a display that should bring confidence following a poor run of form which drew whistles from his own supporters last weekend. Scored the second goal but it was his link-up play — with Suarez especially — and touch that most impressed.

FW Ousmane Dembele, 6 — Added the fifth late on after replacing Coutinho for the final 25 minutes.

MF Arturo Vidal, 6 — Came on for Arthur to put out fires that were starting to spread in midfield.