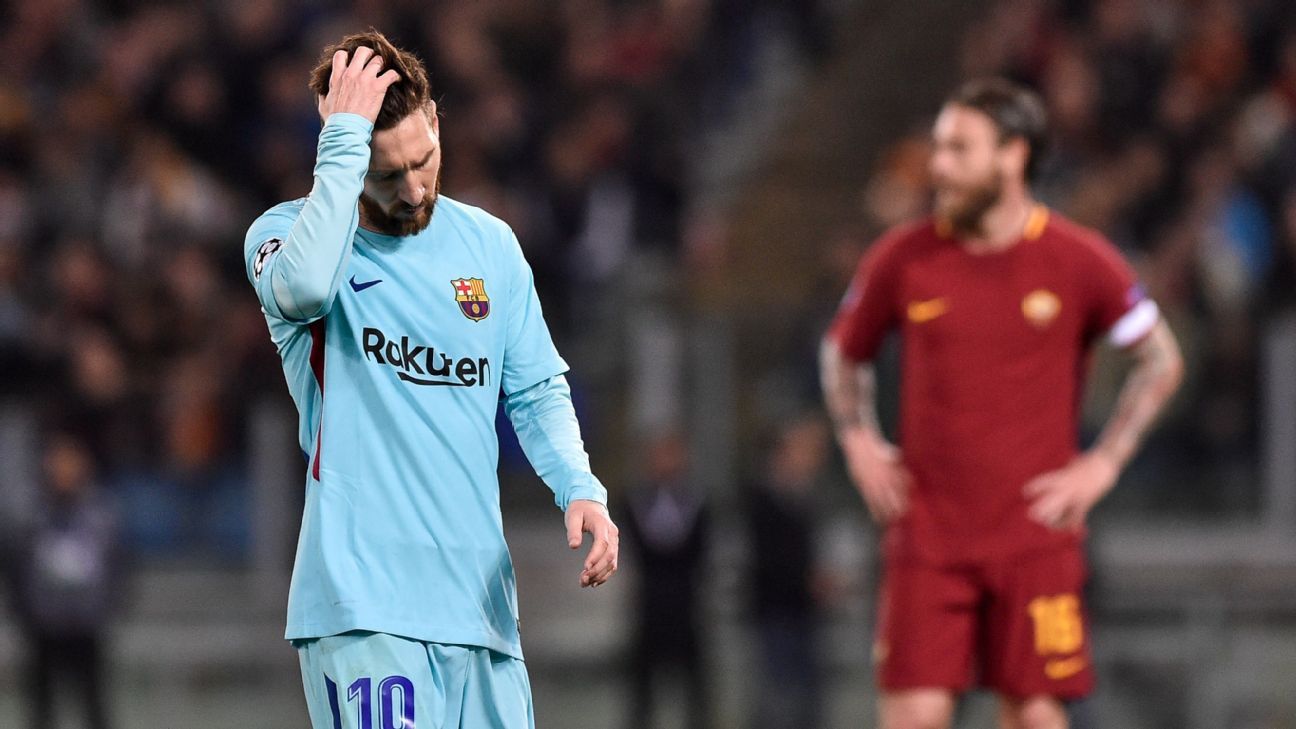 
The soul-searching didn’t wait until Wednesday in Barcelona. It began on Tuesday, as soon as the final whistle blew at the Stadio Olimpico and Roma’s place in the Champions League semifinal was confirmed. Barcelona and Lionel Messi, for the third season in a row and the fourth time in five years, were kicked out of Europe in the last eight.

“Barca spent the whole game waiting for a miracle from Messi,” the director of Catalan newspaper Diario Sport, Ernest Folch, wrote  in the minutes after the game. “So often he is able to hide their weaknesses. But it didn’t arrive this time.

“The most unbearable thing about the elimination is that another Champions League now escapes Barca in the Messi era, a sin which exponentially multiplies the sensation of failure.”

Facts back Folch up. Messi scored in the 2009 and 2011 finals and was the King of the 2015 semifinal against Bayern Munich, but if there’s no Messi miracle, more often than not, Barca crash out of the Champions League before the party gets going. Since 2007, he has never scored in a knockout tie which Barca have lost: Liverpool, Manchester United, Inter Milan, Chelsea, Bayern, Atletico Madrid (twice), Juventus and Roma have all withstood his magic.

Spanish newspaper Marca said those statistics help to explain Barca’s European failings. “Cause and effect,” they say. “The Messi-dependence.”

Is it that simple, though? Stop Messi, stop Barca?

No one has managed that in La Liga this season. Messi, with 29, has scored more than anyone else in Spain’s top flight. He’s set up another 12. That’s a direct involvement in over 50 percent of Barca’s 79 league goals — and it doesn’t include the other goals his fingerprints can be found on.

Take those goals away and Barca would lose 12 points, dropping below Atletico in the table. Take the goals and the assists away, they would lose 20 points, demoting them below Real Madrid and Valencia, too.

Barca are unbeaten in La Liga — only thanks to Messi’s match-saving cameo at Sevilla — and on track to win their seventh title in 10 years. That’s predominantly thanks to Messi. Former president Joan Gaspart, though, said this week that the Argentine forward cannot win the Champions League all on his own.

He may feel like he will never win the Champions League again at this rate. Not since 2013 has he scored a goal in the quarterfinals, against Paris Saint-Germain. Barca were then stung 7-0 on aggregate by Bayern in the last four. Since then, the Catalans have been knocked out in the last eight in four of the last five years, Messi never on target. The slight exception is 2015. There was notably less reliance on Messi (although he was still the semifinal hero) who, with the benefit of hindsight, was perhaps at his most selfless alongside Luis Suarez and Neymar, whose goals in the quarterfinal and final fired Barca to the trophy. The feeling was of a workload shared.

That’s certainly not the feeling this season. Not in La Liga and certainly not in the Champions League. Luis Suarez has scored just once in Europe this season, the fourth in the first leg win against Roma. Messi, with six, is Barca’s top scorer in the competition. Their second top scorer? Own goals, with five.

Messi cannot go completely without blame, though. While he can’t do it on his own all the time, Barca’s poor European showings are becoming a regular thing. In Rome, he lost the ball 19 times and failed to really trouble goalkeeper Alisson with his five shots — although they were more speculative efforts and free kicks.

Maybe, after his recent hamstring problems, he wasn’t totally fit either, while while Mundo Deportivo journalist Francesc Aguilar bemoaned the fact he “had to drop almost into defence just to make contact with the ball.”

That won’t stop his detractors pointing to another no-show on the big stage, though.

The soul-searching in the local press has led to questions about legacy. Most prominently about Barca tainting Messi’s. Folch said that failing consistently with the five-time world player of the year, considered the best ever by many, “multiplies the sensation of failure.”

In the seven years since Pep Guardiola left the club, Barca have won just one Champions League. Have they wasted Messi’s peak years? Obviously, any club would rely on one of the game’s greats, but has his presence inadvertently seen the club stall in other areas of the pitch since Guardiola parted? What hurts them even more is that the feeling of failure is heightened by Real Madrid and Cristiano Ronaldo’s continued European success, another reminder coming on Wednesday as the Portugal forward’s stoppage-time penalty eliminated Juventus.

These are all questions Barcelona must ask themselves as they prepare their next assault on the Champions League.

“There will be a lot of reflecting on the Roma game,” Lluis Mascaro wrote in Diario Sport on Tuesday.

“On Valverde’s planning. On the team’s errors. On the genuine footballing value of this Barca side. A Barca side that have been carried by Messi this season and when he hasn’t acted as a genius, everything’s gone downhill. Everything. Luckily La Liga is already won.”