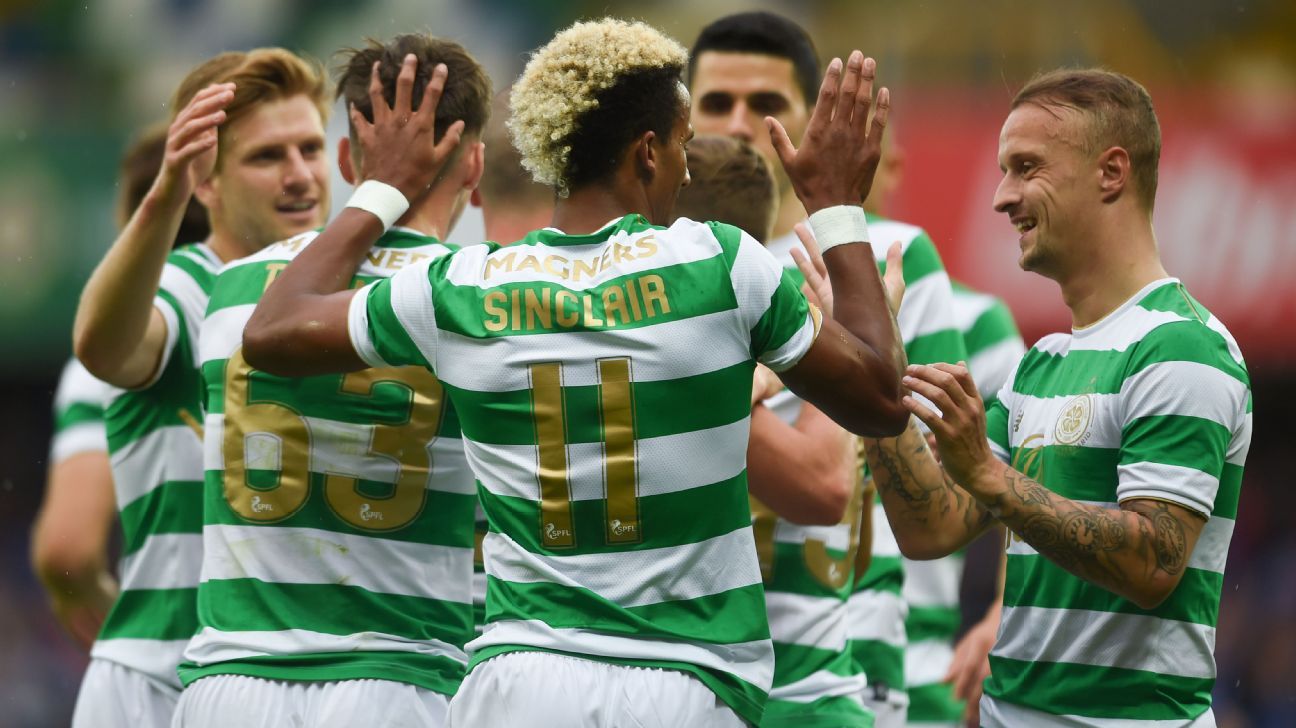 Celtic took the first step towards the Champions League with a comfortable 2-0 win over part-time Linfield at Windsor Park.

The Parkhead club had refused their ticket allocation for the first leg of the second qualifying round clash in Belfast due to safety fears.

However, there were around 300 Hoops fans in the Kop stand, set aside for them in a half-full stadium, to see attacker Scott Sinclair head Brendan Rodgers’ side ahead in the 17th minute before midfielder Tom Rogic made it 2-0 five minutes later.

It was a canter in the second half for the Glasgow club against the Northern Irish champions but there was some missiles thrown by home fans in the south stand at Celtic corners which blighted the night.

Yet the Scottish champions will surely finish the tie off next Wednesday night with the winners of the Dundalk versus Rosenborg clash waiting in the next round.

It was a familiar-looking Hoops side which began their European journey, fresh from a domestic treble last season when they went unbeaten in Scotland.

Linfield, managed by former Rangers striker David Healy, had the experienced ex-Gers keeper Roy Carroll in goal and his contribution was notable.

The 39-year-old had to make a save from a Stuart Armstrong drive in the first minute as the visitors took immediate control.

The Northern Irish champions were happy to concede possession and defend deep in their own half, which made it difficult for the Hoops, but they got the breakthrough following a Leigh Griffiths corner from the left.

Defender Jozo Simunovic got his head on to it, but the ball drifted wide to winger James Forrest, who lobbed it back into the six-yard box, where Sinclair nodded it past Carroll at no great pace.

Rogic’s goal also came from a Griffiths corner, this time a low drive which the Australia international smartly dispatched from eight yards out.

The home side had to come out of their blue shell and Mark Haughey got on the end of Chris Casement’s cross from the right, but the defender slashed the ball over from 10 yards.

As driving rain took over from earlier sunshine, Carroll twice denied Sinclair with fine saves before Mikael Lustig rolled a shot past the far post from eight yards when he ought to have hit the target.

Griffiths had the ball in the net seconds after the restart only for the assistant’s flag to rule it out before Linfield defender Matthew Clarke was carried from the field on a stretcher and replaced by Jordan Stewart after he blocked a Forrest effort inside the home side’s penalty area.

In the 64th minute there was some controversy, not to say bemusement, when Spanish referee Alejandro Hernandez booked Griffiths for presumably taking too long to take a corner, his task made difficult by the series of objects being thrown at him by Linfield fans.

The Scotland striker was soon withdrawn by Rodgers, with Moussa Dembele coming on, with Hayes replacing Forrest to make his debut and he too had missiles launched at him when took over corner-kick duties.

In an increasingly scrappy match Rogic missed the target with a drive and Carroll thwarted further attempts from Armstrong, Dembele and Lustig, twice, as Celtic retained their grip until the end.

Rodgers’ first game in charge of the Hoops last summer saw an embarrassing 1-0 defeat to minnows Lincoln Red Imps in Gibraltar before they recovered in the second-leg, eventually making the group stages.

This time, the passage through to the third qualifier is all but guaranteed, while UEFA are certain to address the off-field behaviour.