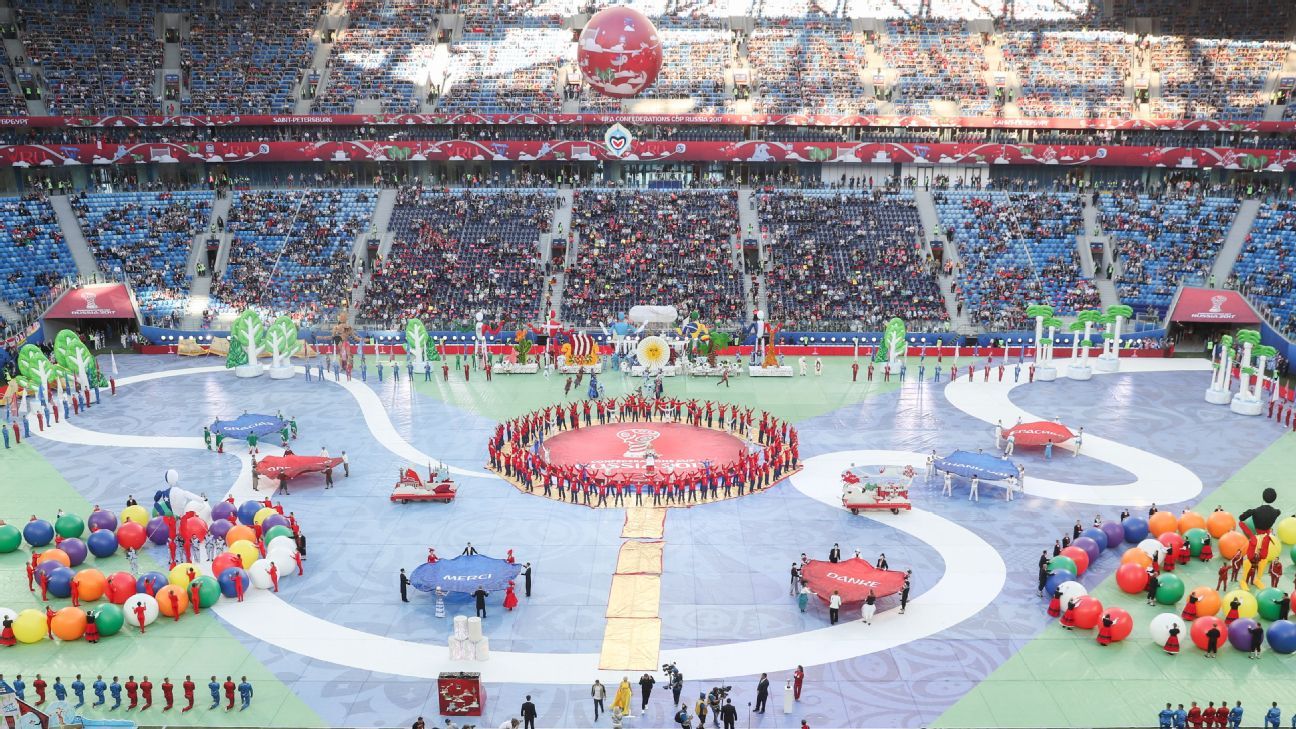 
ST. PETERSBURG, Russia — Russia has hosted 16 games across four venues during the Confederations Cup over the past fortnight as the country prepares to host the World Cup in a year’s time.

Russia 2018 will be played on a much greater scale, with 32 nations aiming to win the trophy during a monthlong tournament. But after successfully staging the Confederations Cup, which saw Germany emerge as winners with a 1-0 victory over Chile in St. Petersburg on Sunday, is Russia now ready to stage the World Cup?

Moscow’s Luzhniki Stadium, which will stage the World Cup final, is ready after a three-year rebuild and is due to stage its first game in November.

There are some hitches, with worries over the problematic pitch in St. Petersburg, but nothing which threatens to cost the city the right to stage games.

This is what $1.4bn gets you these days. The Krestovsky Stadium, Saint Petersburg pic.twitter.com/cq1GTJGLTX

Away from the Confederations Cup, however, there are issues over the progress of the new stadiums in Rostov, Samara and Saransk.

Saransk, which will only stage group games at the Mordovia Arena, insist the stadium will be ready by December, but that appears optimistic.

However, with just under 12 months to go before the World Cup begins, Russia is undoubtedly way ahead of Brazil and South Africa at the same stage of their preparations for the 2014 and 2010 World Cups, respectively.

Russia 2018 will be a whole new experience for many travelling supporters because of the Fan ID system which was successfully trialled during the Confederations Cup.

Supporters get a Fan ID, which enables them to get match tickets and secure a free Russian visa. Other benefits include free bus, Metro and train travel in and between host cities. The system worked well at the Confederations Cup, although there were lengthy queues to get into stadiums as IDs were scanned and bags checked.

The key to the Fan ID, which is worn as a lanyard with a photographic ID, is that supporters without tickets will simply not be able to get into matches at the World Cup. So countries which are traditionally followed by large groups of ticketless fans — England, for one — will see their fan numbers reduced.

Fan ID will deny supporters who want to drop everything and fly to the World Cup just to be part of the experience whether they make it into the ground or not, but it is also a positive in that it should help cut out the inflated reselling of tickets by touts.

Russia will adopt a zero tolerance approach to fans intent on causing trouble in 2018, and the country’s determination to project a strong, secure image was evident throughout the Confederations Cup.

Large numbers of police patrolled the streets in each host city, and they were also deployed on Metro trains, sometimes with dogs, and more often than not were armed. Armoured riot police were a common sight outside stadiums on matchdays, but despite the ever-visible presence, it did not feel intimidating or overbearing.

Supporters were left free to take photographs and, in the case of Mexico and Chile fans, make lots of noise and behave in a way that surprised many locals.

Getting into Metro stations and match stadiums was also a big security operation with airport-style security, ID scans and bag searches. But Russia feels well-prepared for the World Cup and ready to deal with the huge influx of overseas visitors.

In Moscow and St. Petersburg, well-established Metro systems enable easy access to all match venues — particularly in the case of Spartak Stadium, which is less than 100 yards from the recently opened Spartak station.

One issue which must be addressed before 2018 is the signage on both Metro networks, because, while there are some signs in English, they are too few and poorly positioned.

The Cyrillic alphabet ensures a confusing experience at times deep underground in Moscow and St. Petersburg, but once you have the basics, the Metro systems are an easy to way to get around two cities which have less free-flowing road networks.

Kazan still lacks a comprehensive Metro system, and some fans during the past fortnight have walked between the stadium and the city before and after games — an hourlong walk on some poorly lit roads.

Sochi is a beachfront stadium which is easily accessible on foot if staying in the resort of Adler — less so if staying in Sochi, which is a 35-minute drive away.

Sochi, where they wanted a stadium close the beach. Close enough? pic.twitter.com/OuteAD097H

Trains run regularly and generally on time, with the Sapsan Express between St. Petersburg and Moscow covering the journey in 3 hours, 45 minutes on a spacious, modern train.

Flights between some cities may be in short supply, but every major city is well-served by Moscow’s four airports.

The weather during the Confederations Cup has emphasised the problems facing supporters and competing teams alike in 2018. It is unpredictable to say the least, with Moscow and St. Petersburg as likely to bake in plus-25 degrees Celsius (77 Fahrenheit) heat as they are to be deluged in rain.

On the weekend of the final in St. Petersburg, the city experienced heavy rain and strong winds on Saturday before enjoying a glorious, sunny day 24 hours later.

Kazan is another city which experienced both ends of the scale, while Sochi, a sun-kissed Black Sea resort, also suffered rainy days during the tournament.

Daily weather update from Kazan. Some rain, most of it heavy…#ConfederationsCup2017 pic.twitter.com/YvYLo6kO5J

Residents in each city insisted that 2017 has seen Russia subjected to freak weather, with the rain much heavier than in recent years. But fans expecting lots of sunshine at the World Cup will need to think again, as will competing nations when it comes to locating a base camp and preparing for a month of unpredictability.

If Russia has one seemingly insurmountable problem ahead of 2018, it is the country’s failing football team.

Stanislav Cherchesov’s team were eliminated in the group stage of the Confederations Cup after defeats against Portugal and Mexico, which followed a solitary win against New Zealand.

Cherchesov has a huge task ahead of him to make Russia competitive next summer, when simply getting out of the group will be regarded as a success.

Every World Cup needs a vibrant host nation to prosper on the field, for the sake of the atmosphere within the country. Only once, at South Africa 2010, has a host nation failed to progress to the knockout stages, and Russia are in danger of suffering the same fate as the South Africans.

It will need Russia to land a favourable group when the draw takes place in the Kremlin in December. They are seeded, at least, but Russia will still need a decent portion of good fortune if they are to make an impression on this World Cup.