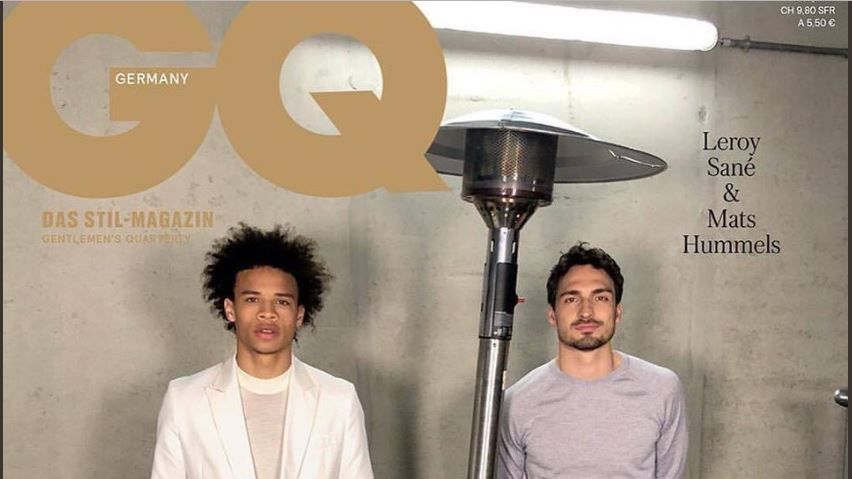 Leroy Sane’s shock omission from Germany’s 2018 World Cup squad is still making waves in his homeland, where he is being haunted by his own image.

From today, the Manchester City star can pick up copies of GQ magazine and see himself on the cover.

Alongside Bayern defender Mats Hummels, the PFA Young Player of the Year is one of the cover stars of the July issue of the magazine’s German edition.

The “Our Heroes” edition comes with three different covers, with the other two showing Toni Kroos with Thomas Muller and fashion icon Joachim Low sat on a stool.

Shot in Dusseldorf by fashion photographer Jurgen Teller — who has worked with Kim Karadashian and Kanye West, Kate Moss, Victoria Beckham, Winona Ryder and Bjork – Sane featured among his compatriots as nobody had expected him to not go to the World Cup.

“The mission title defence could not have started more spectacularly for Bundestrainer Jogi Low and his world champions,” the magazine said. “They gained entrance to the Hall of Fame with their win in Rio four years ago, and now the lads have been declared as art.”

And that is not Sane’s only cruel glimpse into a parallel universe in which he got the nod over Julian Brandt. Official Germany team sponsor Samsung has also already gone to print with their newspaper ads wishing the world champions luck in Russia.

The only thing Germany can do is win the final in Moscow on July 15 and then invite Sane, in full kit, to lift the trophy with the 23 players who made the cut.