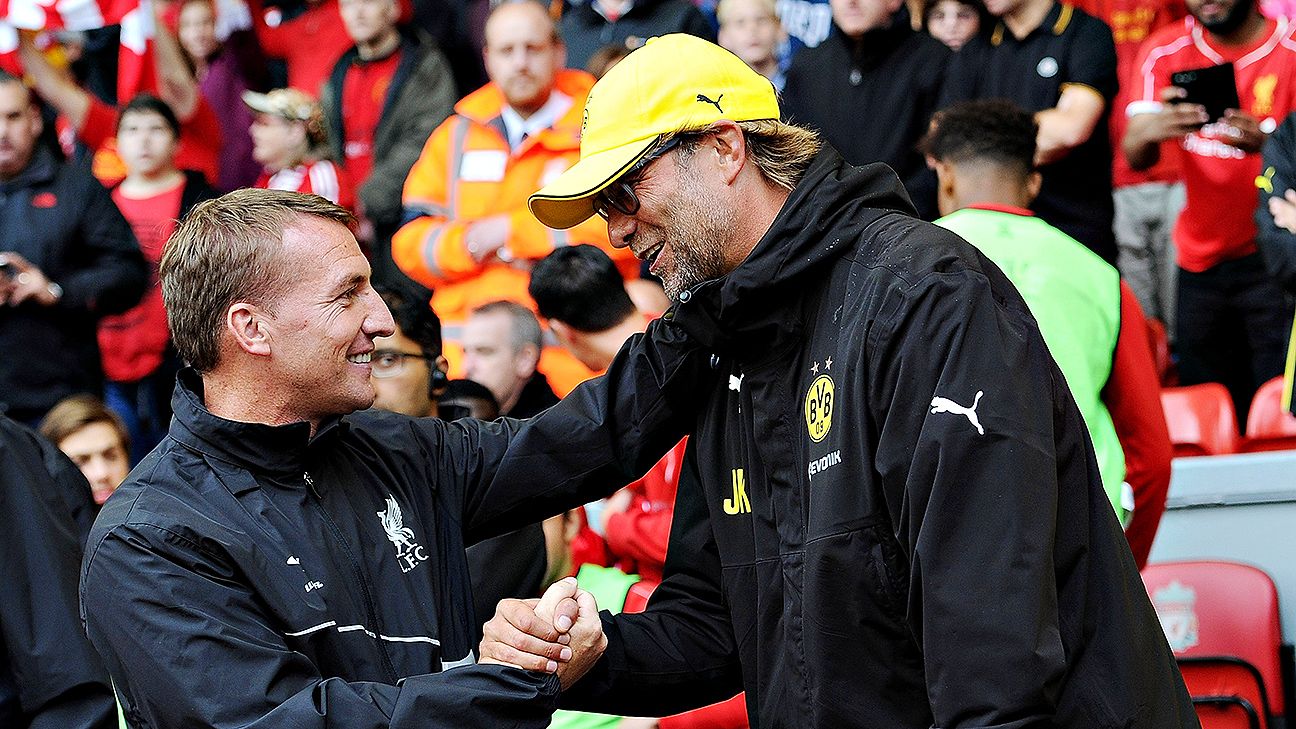 
Brendan Rodgers has hailed the “brilliant job” Jurgen Klopp has done at Liverpool as the Leicester manager prepares to make his first visit to Anfield since parting ways with the club five years ago.

Rodgers nearly led Liverpool to their first Premier League title in 2014 before being pipped by Manchester City in the final weeks of the campaign.

Liverpool finished sixth the following season and a poor start in 2015 led to Rodgers being sacked in October that year.

– Premier League winter break: All you need to know

“I’m really looking forward to going back. I had the real privilege of managing there,” Rodgers told reporters. “So much learning took place for me at Liverpool.

“Those first couple of seasons went well and we went close to the title. The third year was more difficult but there was great learning for me as a coach. The fourth season didn’t last so long.”

Liverpool replaced Rodgers with Klopp and the club has gone from strength to strength under the German, reaching two consecutive Champions League finals and winning the trophy last season.

They ran City close in the Premier League title race that went down to the final day of the last campaign and have started this season with seven wins to sit top of the standings with 21 points — seven more than third-placed Leicester.

“Jurgen has done a brilliant job,” Rodgers added. “He’s brought a real harmony and togetherness to the team and supporters. The consistency has helped. There’s areas of the field where he’s brought in top, top players.

“We’re going there to test the Champions League winners. If we work as well as we have been, we can match any team. We’re looking forward to seeing how we can impose our game.”

Leicester have amassed 31 points since Rodgers’ appointment last season — a total beaten only by Liverpool (49) and City (46) — and much of it has been down to striker Jamie Vardy‘s resurgence.

Since Rodgers took charge, the 32-year-old has scored 14 goals in 17 league appearances — more than any other player.

“He’s recognised as one of the best strikers in the division and in Europe,” Rodgers said. “You don’t appreciate it until you work with him day to day.

“He’s a real leader on the field. He has an inherent belief in his abilities and he’s very clinical.”

Rodgers confirmed midfielder James Maddison, who missed the 5-0 humbling of Newcastle United last weekend with an injury, was back in the squad.