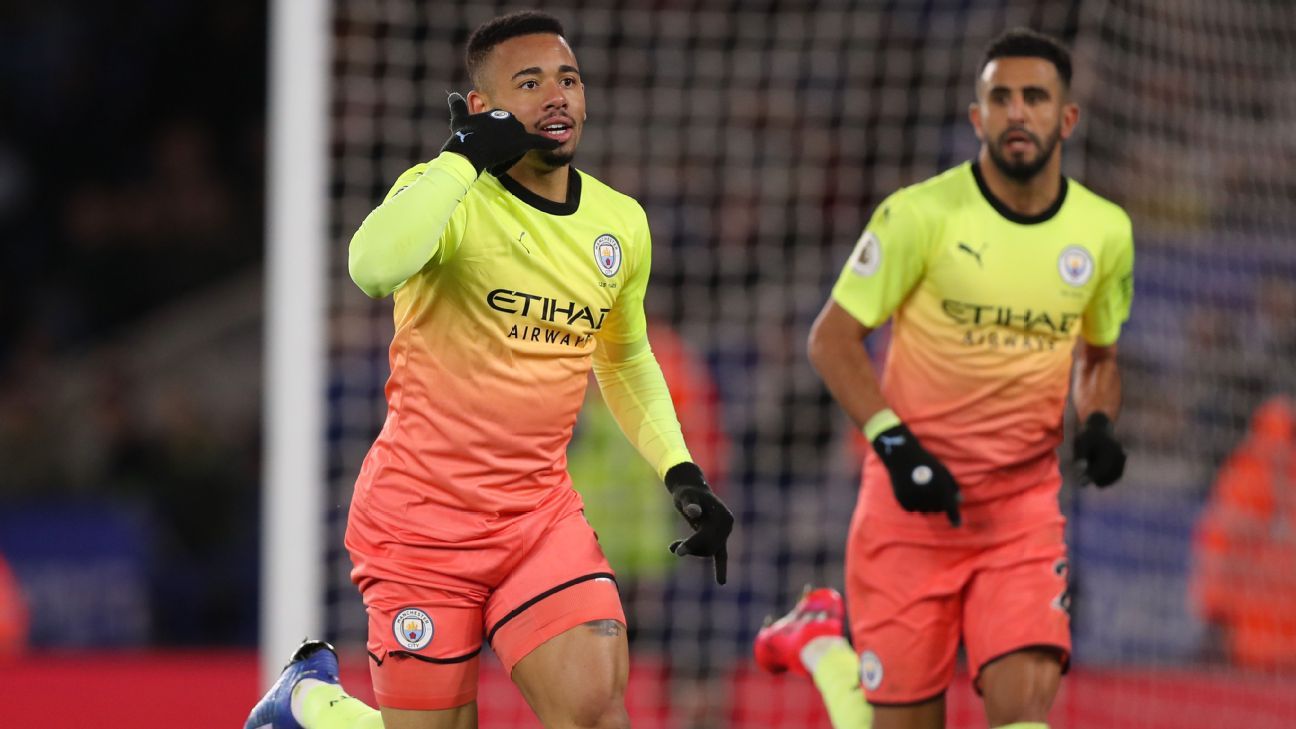 
Gabriel Jesus scored a late winner as Manchester City edged Leicester to a 1-0 win in the Premier League on Saturday to go seven points clear of their opponents in second place.

After a fine run by ex-Leicester man Riyad Mahrez, substitute Jesus found space on the right-hand side of the 18-yard box before dispatching the ball past goalkeeper Kasper Schmeichel. The goal was confirmed by VAR after a check for offside.

Schmeichel earlier made a string of fine saves, including one from Sergio Aguero‘s penalty on 62 minutes after VAR ruled for a handball on Dennis Praet, who blocked Ilkay Gundogan‘s shot with a raised elbow.

Jamie Vardy went close early in the contest, getting in behind City’s back line before hitting the post during the ensuing one-on-one with Ederson, while Leicester also had a penalty claim rejected after James Maddison’s free-kick struck the arm of Kevin De Bruyne.

“We’re disappointed we didn’t get a penalty; it’s so clear,” Leicester manager Brendan Rodgers told Sky Sports. “I felt it was the reason VAR was brought in. It was going towards the goal, the corner, and Kevin De Bruyne stops it. He’s lifted his arms up. If you look at the reaction of the other players in the wall, their hands were down. It’s handball.”

Aguero’s miss from the spot was City’s fourth consecutive fluffed penalty in league play, but Pep Guardiola insisted “next one we are going to score” before looking ahead to his side’s visit to Real Madrid for the first leg of their Champions League last-16 tie on Wednesday.

“The preparation after 12 days off was good, we have played two good games, and it’s good to prepare for Madrid with these good opponents. We are playing the kings of the competition, we will see, we will try to enjoy it and do our game.”

The game will be City’s first in European competition since the club was handed a two-year ban for financial irregularities. Fans protested against UEFA during the match with West Ham on Wednesday and again at Leicester, but Mahrez said the issue was not at the forefront of the players’ thinking.

“We just focus on our game,” Mahrez said. “We let the club do the things, we are very confident of the situation and we will see.”

After the game, Rodgers said that medical advice was behind the decision to substitute striker Kelechi Iheanacho, who was replaced at half-time having initially played on after a collision with Ederson.

“Iheanacho felt a bit groggy at half-time, and I always listen to the medical staff on that,” Rodgers said. “They felt it would be hard for him to continue at the level.”