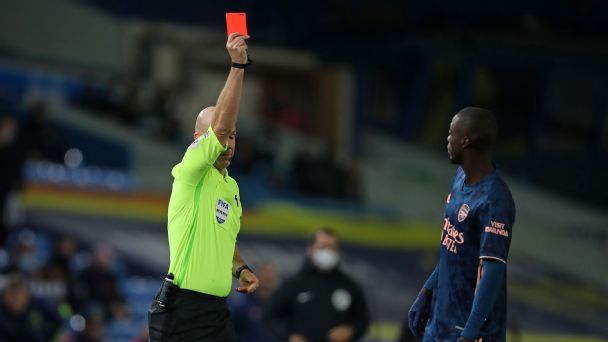 
Ill-discipline plagued Arsenal once again as Mikel Arteta’s side were reduced to 10-men in the second half of their 0-0 draw with Leeds United on Sunday.

Nicolas Pepe was sent off on 51 minutes for headbutting Leeds’ Ezgjan Alioski. The red card was the fifth Arsenal have received since Arteta took over in 2019, two more than any other club in the league.

The home side had the better of Arsenal in the first 45 minutes with the Gunners failing to register a single shot on target — the second time this season that has happened to them in a game.

The start of the second half didn’t improve matters much for Arteta’s side when there were shouts from the Leeds players about an off the ball incident.

Replays of the incident showed Alioski shoving Pepe who responded by lightly headbutting him which caused the Macedonia international to drop to the ground.

Despite the added advantage, Leeds made difficult work of their search for a goal.

Bernd Leno was forced into a good save just after the hour mark when Raphinha dropped a ball into Stuart Dallas who took two touches before sending the ball towards the left-hand corner of the Arsenal goal. Leno’s diving save was just enough to keep it out.

Arsenal had a late call for handball after Bukayo Saka made a driving run from box-to-box before laying it off to Pierre-Emerick Aubameyang who had his shot blocked. The Gabon international claimed it was a handball by Liam Cooper but referee Taylor waved it away.

Arsenal are 11th on 13 points from nine games after their first draw of the season with Leeds 14th on 11.