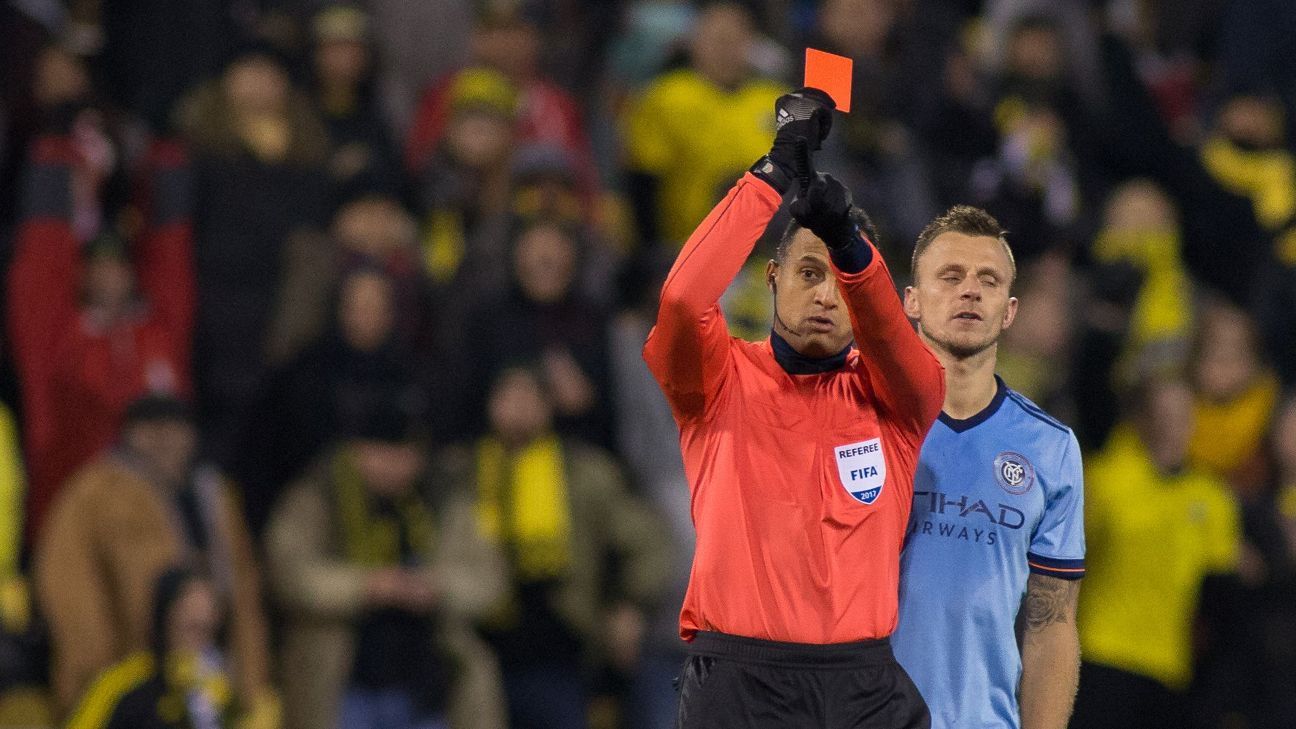 
It’s the nature of two-legged playoff games that it’s not only the goals, it’s the momentum shifts that become significant inflection points in a series, and very often those shifts come from decisions made by the officials. This year’s playoffs have been no different, and given the innovations this season, it’s been no surprise that VAR has already played a crucial part in altering the two games in which it was used, and in one case, perhaps determined the trajectory of a conference semifinal.

On Monday night, Portland Timbers defender Larrys Mabiala slid in on the Houston Dynamo’s Alberth Elis as he bore down on goal. The referee, Robert Sibiga, initially saw it as a lunge upending the attacker, and the first impression was reinforced by the trailing leg of Mabiala seeming to scissor Elis. But the subsequent VAR review by the officials determined that Mabiala had actually made a perfectly timed tackle, and the penalty was cancelled.

Elis would insist afterward that the incident had not affected the flow of a game that finished 0-0, but with chances at a premium for Houston — the Dynamo had only two shots on target all night — and Portland clearly setting out to thwart their counterattack and win the series at home, the non-call could yet prove to be a key one, even if altering the momentum of another dull playoff game at BBVA Compass Stadium would have required there to have been some momentum to alter in the first place.

There was no such problem at MAPFRE Stadium, where the emotion of the home fans chanting for their team’s very existence already lent itself to the volatile nature of cup soccer before a ball had even been kicked. And once the game did get underway, each of the two teams seemed to do their very best to hand the momentum to the other. Columbus Crew SC opened the scoring, only to give up multiple turnovers to New York City FC’s determined midfield. In turn, NYCFC’s attack passed up multiple chances created by those turnovers, which could have leveled the game.

Still, by the time the 52nd minute came round, NYCFC had a corner and were looking at another chance to level the series and take a road goal back to Yankee Stadium. Instead, what happened next probably ended their season.

Since its arrival, VAR has swiftly become a familiar if still infrequent and dramatic insertion into the rhythm of MLS games, and the playoff stakes only heighten the sense of suspense as we wait for decisions. Yet Alexander Callens’ elbow to Justin Meram’s face, and the obvious glance toward him that preceded it, were both so obvious on TV replays of the incident that referee Ismail Elfath’s jog to the VAR table just seemed to be postponing the inevitable. The only suspense left came when Callens might briefly have thought he was getting away with a yellow, only to find Elfath had kept his red card in his top pocket instead of his rear one.

With Callens gone, Alexander Ring briefly dropped out of the midfield to help in defense, as Patrick Vieira figured out his contingency substitutions. He was still figuring it out when Artur extended a 1-0 Crew SC lead to 2-0. By the time the Crew ran out 4-1 winners, it was fair to say that Callens had made himself a poster child for video review.

Yet another story of the playoffs so far has been a lack of officiating interventions rather than the mechanized enhancements of key ones. There have been mutterings among fans that referees are swallowing their whistles, a familiar feeling in the game of offenses being let go to avoid stacking up yellow cards and suspensions that could spoil later rounds. The numbers back up this suggestion: The regular season saw an average of 24.52 fouls committed per game, while in the eight postseason matches so far, that number has dropped to 18.13.

Understandably, New York Red Bulls players were not in a good place on Monday night after their 2-1 home loss to Toronto. While no player officially complained about the officiating on the record, Sacha Kljestan removed an ice pack to show bloody cleat marks raked across his knee and allow observers to draw their own conclusions about why the foul that caused them wasn’t punished with a card.

Both New York teams only had themselves to blame for the scenarios they face in their respective second legs, of course, but the officiating has played a part in the tone of both of their games. Referees seem to be letting more go during the playoffs than in the regular season, and players with more control — or at least more subtlety than Callens — are using that to impose themselves in games, in the knowledge they seem less likely than usual to end up carrying cards as a result.

Referees would point out that nobody wants to see the playoffs marred by unnecessary suspensions, but the problem with letting play flow is that that’s a refereeing intervention in and of itself. With plenty of advantages for sure, but plenty of pitfalls too, when it comes to player safety.

And if a lax disciplinary tone has been established, expect the opening moments of some of the return legs to be explosive, as long-shot teams try to force themselves back into games while pushing the referees’ indulgence in doing so. But if they go too far, there’s a camera for that.