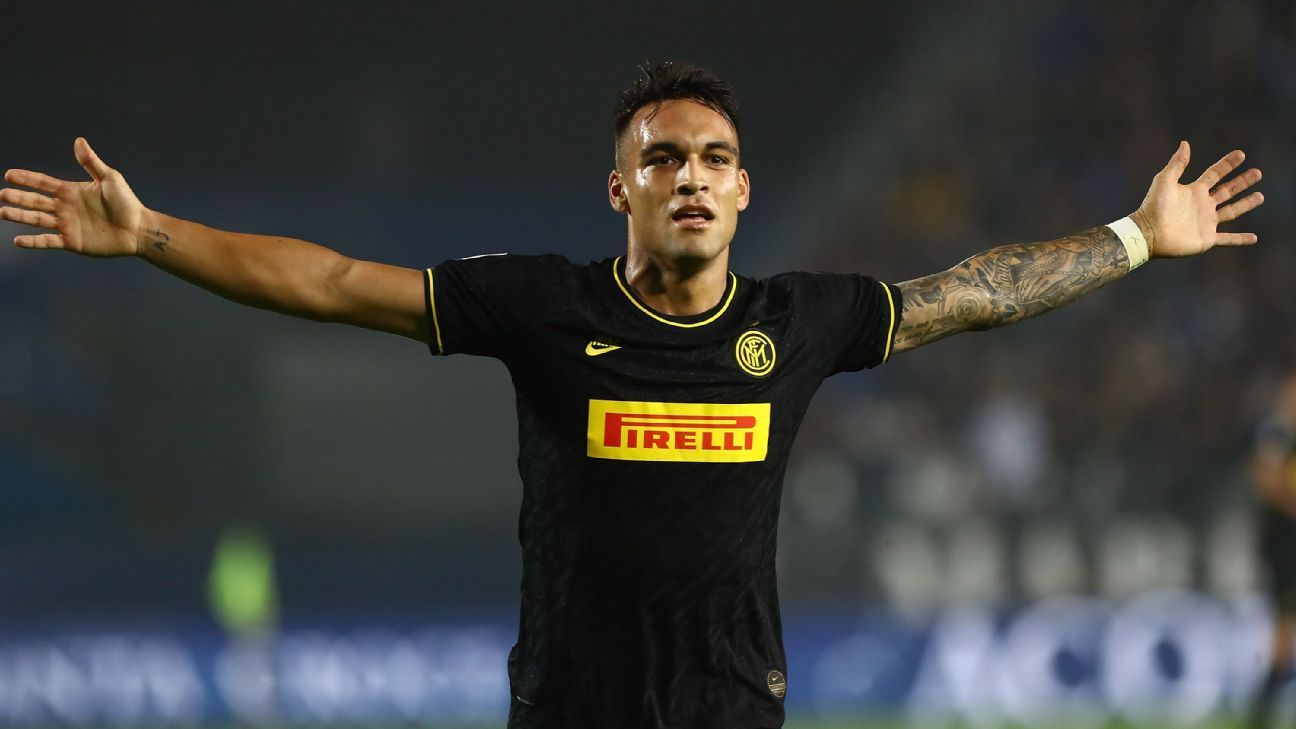 
Lautaro Martinez did not leave much of an impression during his first visit to the Camp Nou. The Argentinian forward had played only a handful of games for Inter in the fall of 2018 before being thrown into a Champions League group-stage clash with Barcelona as a second-half substitute. His team was trailing 1-0 and had not mustered a shot on goal in 64 minutes. Lautaro did at least manage one of those, but never threatened to reverse the tide of an eventual 2-0 defeat.

How many of the 80,000 supporters in attendance would even have remembered his name, let alone imagined him as a possible heir to Luis Suarez? Fast forward to 2020 and plenty are hoping that he will become exactly that.

Barcelona’s pursuit of Lautaro is an open secret. Their interest had been acknowledged publicly during interviews by Ernesto Valverde before he was fired as the club’s manager in January. Different sources paint different pictures of how close a deal is to being completed, but nobody disputes that earnest enquiries have been made. Equally, it’s not hard to imagine how Lautaro might have captured the Catalan club’s attention. Twelve months after that anonymous first outing at the Camp Nou, he returned to deliver a far more compelling performance in this season’s group stage.

Named in the starting XI this time, Lautaro needed all of two minutes to open the scoring. Accelerating onto Alexis Sanchez‘s chipped pass, he held off Clement Lenglet before drilling the ball into the far bottom corner off his notionally “weaker” left boot. It was a goal that only looked better with repeat viewings. The body control required to strike a ball with such precision while going to ground are uncommon even at the highest level.

Nor did Lautaro’s eye-catching performance end there. Even as Inter yielded possession and position to their hosts, he remained the focal point for a series of scintillating counterattacks. Despite giving up five inches in height to Lenglet, he rose above the defender for a close-range header that demanded a brilliant save from Marc-Andre ter Stegen. A whirlwind exchange of passes with Stefano Sensi teed up his teammate to fire just over.

Barcelona won, thanks to two brilliantly taken goals from Suarez, but Lautaro had left an impression. He would only reinforce it with his performances for Inter over the months that followed.

Lautaro had not started this season in prolific form. With a new manager in Antonio Conte and a new strike partner in Romelu Lukaku, a bedding-in period was required. That goal against Barcelona, on Oct. 2, was only his second of the season. He followed it up with 11 in his next 11 club games, and the biggest stages only seemed to draw out his best.

Lautaro scored against Juventus and then again against Borussia Dortmund — home and away. A brace against Slavia Prague should have paved the way for Inter to progress to the Champions League’s knockout stage, but they fluffed their lines at home to Barcelona in the final game.

Regardless, Lautaro was flying; almost literally at times. Despite standing just 5-foot-8, Lautaro wins a surprising number of headers, with three of his 16 Inter goals this season arriving that way. Growing up in basketball-mad Bahia Blanca (Manu Ginobili’s hometown), he learned how to achieve maximum elevation at a young age. Only at 15 did he give up basketball to pursue soccer and even now, he still prefers to watch the former sport on TV.

More than his leaps, though, what stands out with Lautaro is his awareness of his surroundings; the talent for finding the space to attack the ball uncontested even in a crowded penalty box. Perhaps it is simply a question of focus.

Lautaro began his professional career with Racing Club in Argentina, and during his time in the academy there, he joined his teammates in undergoing an annual concentration test. Players were presented with a grid of 100 jumbled-up numbers, and asked to draw a continuous line through them to put them back in the correct order from lowest to highest.

The club’s psychologist, Cecilia Contarino, would allow them a short time to get started, then start asking questions designed to divert them from the task at hand. As she explained it during an interview with Mundo Deportivo: “On the pitch, there are many factors that will distract players: fans, opponents, weather, tiredness. A footballer has to be able to concentrate through it all.

“When I asked [Lautaro] things, he answered me and continued as if nothing disturbed him. He scored 98 out of 100. The normal is between 50 and 70.”

Suspecting a fluke, she asked him to take the Toulouse-Pieron Cancellation Test — a psychometric test designed to assess a person’s perception and focus. Once again, Lautaro aced it.

There are other traits that mark him apart. He has the pace to unsettle any central defender, coupled with impressive balance and surprising strength. Lenglet was not the first, nor the last, defender to discover too late that Lautaro cannot easily be bundled off his feet.

Most important of all, though, might be the player’s underpinning desire to get better. He made his senior debut for Racing at 18 but was sent off in his third game, collecting two yellow cards in little more than 20 minutes on the pitch. With Diego Milito, Lisandro Lopez, Gustavo Bou and Roger Martinez ahead of him in the pecking order, he feared he had blown his big chance.

“Everything was difficult at that moment,” he would later tell the newspaper El Grafico. “I felt very guilty, I was psychologically in a bad place. But I knew the only person who could turn things around was me.”

And so he did. Lautaro collected only two yellow cards in his next 17 appearances as he started to pile up the goals instead. At 20, off his own initiative, he asked his agent to find him a nutritionist to help him take his athletic performance up another level. Milito, a former Treble winner at Inter, called up his old friend Javier Zanetti — now serving as a director at the club — and told him this kid was a safe bet.

It has been a similar trajectory for Latuaro in Italy.

He started slowly, with only two goals in his first 12 appearances, and a handful of glaring misses. Inter fans started to fear another highly touted flop, following on the heels of Gabriel Barbosa. But when Mauro Icardi was dropped and stripped of the captaincy following unwelcome remarks by his wife, Wanda Nara, in televised interviews, Lautaro stepped in capably. He scored winning goals against Parma, Rapid Vienna and, most importantly, AC Milan. His performances were not yet brilliant, but he had begun to show flashes of what he could do.

This season, playing alongside Lukaku, only brought further improvement. Lautaro is not yet the finished article, and a two-game suspension for shouting in the face of a referee in January was a reminder that, at 22, he does not yet have perfect control of his temper. But nobody could question that, prior to the coronavirus pandemic, he was trending in the right direction. KPMG’s Football Benchmark listed him in early March as the player who had increased their transfer value most in the preceding three months.

What exactly that means, in the current climate, is difficult to assess. The full extent of the pandemic’s economic impact is not yet known, but soccer clubs’ revenues have unquestionably been hit. In uncertain times, Barcelona may be reluctant to pay Lautaro’s reported $125 million (€111m, £99m) release clause. The possibility of sending players to Inter in part-exchange is being explored, but the Nerazzurri will not want to part with such a talented young player too cheaply.

Lautaro would not be a like-for-like replacement for Suarez, but there are similarities. He cited the Uruguayan, together with Radamel Falcao, as one of the players whose game he tried to model his after back when he was a teenager at Racing.

Both Lautaro and Suarez are atypical No. 9s, with a preference for coming deep to find the ball, yet still possessed of that streak of single-mindedness that prolific goal scorers require. The Inter player, undeniably, can be selfish, averaging just 16.6 passes per 90 minutes — far below the Serie A average even for a centre-forward.

Yet the most important thing that they share might be the appreciation of a certain No. 10. Lionel Messi played alongside Lautaro at the 2019 Copa America, and was said to have been impressed by how neatly he integrated. Lautaro scored against Qatar and Venezuela, leading the line in a 4-3-3 at times and pairing with Sergio Aguero in a front two at others.

“From Argentina’s perspective, the more games that Messi and Lautaro play together, the better,” acknowledged Argentina manager Lionel Scaloni. He was quick to stress that he was not trying to interfere in any transfer and to define Inter as an equally big team. Still, there is no denying that, a year and a half on from that first visit, a growing number of people on both sides of the Atlantic would like to see Lautaro making more appearances at the Camp Nou.