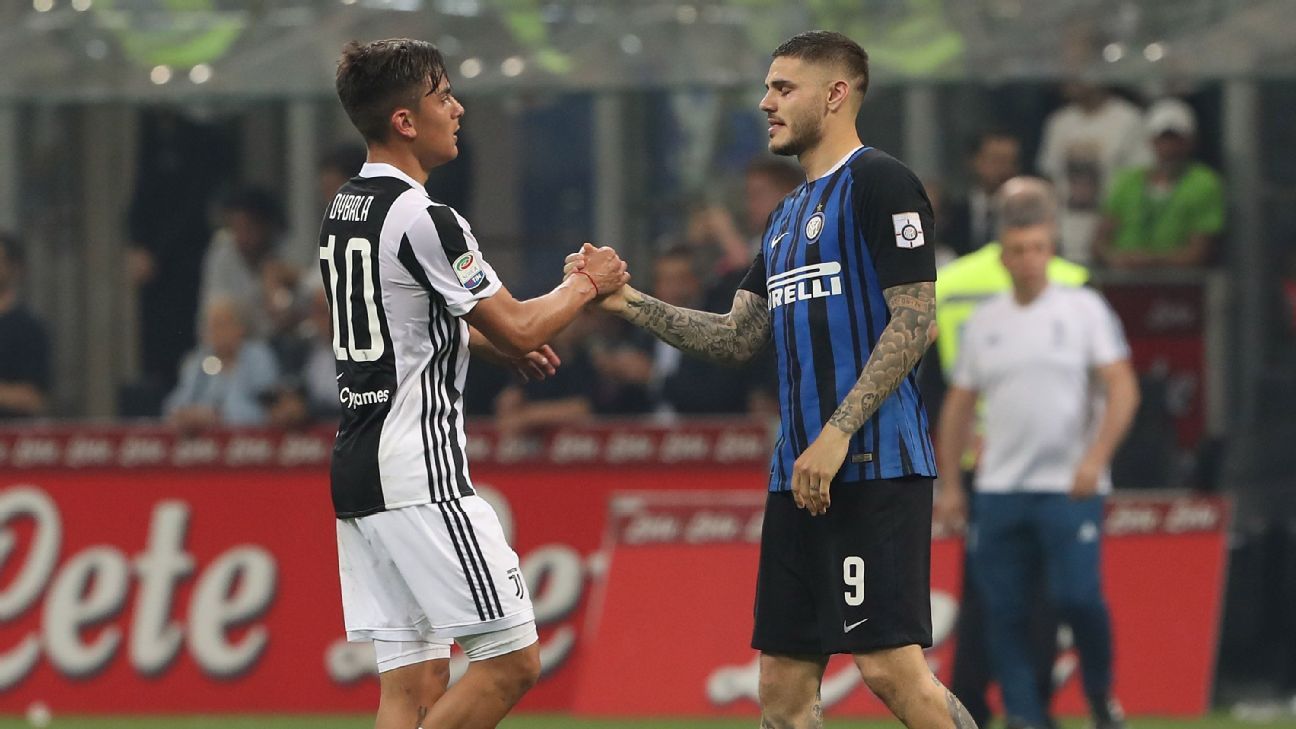 
Juventus have won seven straight Serie A titles and appear well-placed for an eighth, but on Friday they welcome rivals Inter Milan to town for what promises to be an intense battle. Inter are back on the right track after years of midtable difficulties and are currently third. The Derby d’Italia is one of Italy’s biggest rivalries and Gab Marcotti explains why you should enjoy Friday’s edition (2:30 p.m. ET, ESPN2).

1. These two clubs are Italy’s Hatfields and McCoys

Juventus are the ultimate patrician, blue-blood club — until the 1980s, they insisted that players cut their hair and tuck in their shirts — and have been owned by the same family since 1923, making the Agnelli family the longest continuous owners of any professional team, anywhere in the world.

They’ve won nearly twice as many league titles as anybody else (34, though they would insist it’s 36 — more on this later) and their fan base extends all over the country, making them the Dallas Cowboys of Serie A. With much success comes much loathing: ask calcio fans which club they hate most and it’s a safe bet that Juventus will rank first or second among supporters up and down the peninsula, from Roma to Fiorentina to Inter and across the city to Torino, their once-great crosstown rivals.

Contrast this with Inter. They’re on their third owner in six years, and for much of the past few decades, have been a veritable basket case of steady underachievement with the occasional high to break up the monotony. Over the majority of the past half-century they haven’t been hated as much as they’ve been pitied and ridiculed for profligate spending on players, many of whom magically turn into stiffs the moment they pull on the black and blue.

The differences might be best summed up in the lyrics of their respective club anthems. Juventus’ celebrates a “great love story,” while Inter orders the listener to “love that crazy Inter.”

2. About those two ‘missing’ Serie A titles …

Inter fans (and not just Inter fans) have long had a chip on their shoulder about the perceived favouritism that Juventus receive from referees. They still talk about this incident 20 years ago when, with the two clubs locked in a race for the title late in the campaign, this collision between Mark Iuliano and the original Ronaldo not only wasn’t deemed to be an Inter penalty, but ended up resulting in Juventus breaking up the pitch, winning a (somewhat dubious) spot kick of their own and getting a victory that launched them on their way to the title.

Eight years later, a massive enquiry known as “Calciopoli” found Juventus guilty of attempting to influence officials and refereeing appointments. Other clubs were also found guilty, but the heftiest punishment was reserved to Juve, who were stripped of two titles — one was declared vacant, the other awarded to Inter — and relegated to the second division. (Inter, by contrast, have never played in the second tier and love to remind Juventus that they’ve never won the Serie B crown.)

Years later, it emerged that at least one Inter official had also attempted to lobby and sweet-talk refereeing bosses. Andrea Agnelli, the current Juventus president, sued in an attempt to get his clubs’ titles reinstated. When that was unsuccessful, he and others simply started counting them anyway and, indeed, they are listed as Juve titles in their home stadium.

3. There’s never a meeting without controversy

The last time they faced each other, this past April, Juventus traveled to Inter nursing a one point lead over Napoli with four games to go. With Juventus leading 1-0, this foul by Miralem Pjanic was not deemed to be a yellow card: it would have been his second and he would have been sent off. Inter were incensed but somehow still turned it around to lead 2-1. They hung on until three minutes from time before, in typical Inter fashion, conceding twice and losing 3-2.

The fact that for weeks all the talk among Inter fans was about Pjanic’s missing second yellow — and not about the fact that they let a lead slip away in the final 180 seconds — tells you all you need to know about how quickly the ghosts of recriminations past resurface to haunt this rivalry.

4. Cristiano Ronaldo and his (potential) kryptonite

Enough said. If you need more, consider the fact that Juventus spent $110 million — plus another $250m in wages over four years — to secure the 32-year-old, five-time Ballon d’Or winner and ascend to the next level. Winning isn’t enough: they want to dominate, and not just in Italy.

Inter’s response this past summer speaks volumes. Their biggest investment was in Radja Nainggolan, a Belgian dynamo known as “the Ninja” (and known for the odd boozing and cigarettes) who became a cult hero with this video rant in which he says he hates Juve and would gladly give up “a testicle or two” to beat them.

Juventus have won Serie A in each of the past seven seasons and are top of the league again. In that time frame, Inter haven’t finished higher than fourth, but rather than driving supporters away, the perpetual disappointment has only galvanized Inter fans to the point that they have the highest average attendance in Serie A (and the sixth highest in Europe, clocking in at more than 62,000 a game).

This season, they’re finally punching their weight, too: they’re third in the league and still in with a shot of making the knockout round of the Champions League.

Of course, Juventus themselves are looking to the next level. Having already broken the record for consecutive league titles, they’ve reached the Champions League final in two of the past four seasons and are now determined to go all the way.