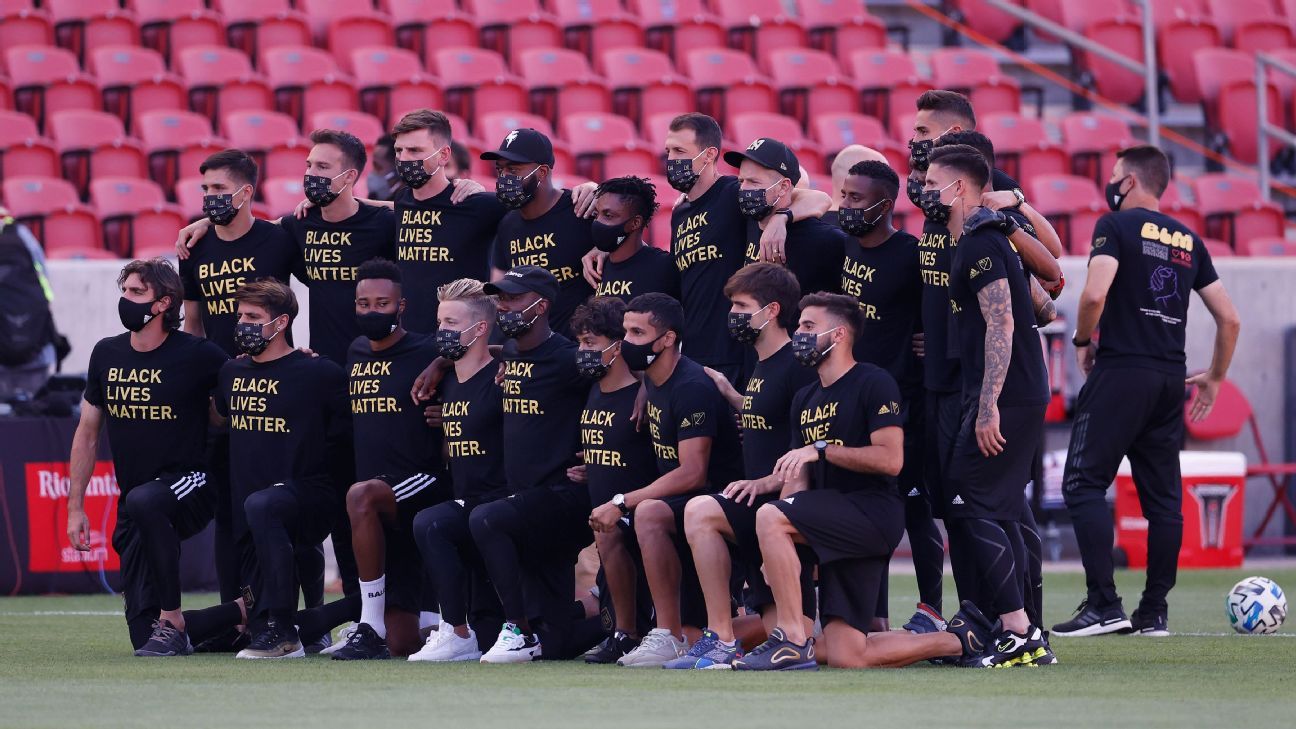 
LAFC midfielder Mark-Anthony Kaye led a chorus of players and managers who insisted that it was the players, not MLS, who decided to postpone five games on Wednesday.

Players from around the league declined to play in protest of racial injustice, and in particular the shooting of Jacob Blake, a Black man, by police on Sunday in Kenosha, Wisconsin. Two demonstrators were killed in the city two days later. The development came as players in both the NBA and WNBA declined to play in support of Black Lives Matter as well as to protest what took place in Kenosha.

Once it was announced that the five games had been postponed, MLS put out a statement that said: “Major League Soccer has made the decision to postpone the remaining matches — Miami-Atlanta, Dallas-Colorado, Real Salt Lake-LAFC, San Jose-Portland, LA Galaxy-Seattle — scheduled for this evening. Each match will be rescheduled.”

Kaye was having none of it, tweeting in response, “We as players made the decision. Fix this, please give the right narrative.”

We as players made the decision. Fix this, please give the right narrative. https://t.co/0Qhb8L7dMc

Kaye’s sentiments were echoed by Seattle Sounders manager Brian Schmetzer, who said in a statement: “I fully support the players’ decision. As an American citizen, it is clear to me that our country is incredibly divided, and it saddens me that some people seem not to understand the importance of this movement. The violence that we are witnessing across our nation needs to be addressed, and tonight I am proud of the players for taking a stand and using their voices.”

After the Milwaukee Bucks opted not to play their scheduled game on Wednesday, counterparts from the NBA, WNBA and some MLB players followed suit.

That created momentum throughout the day for MLS to do the same, and captains and player reps from various teams began conversing. But with Orlando and Nashville kicking off at 7.30 p.m. ET, those teams were under what Nashville captain Dax McCarty called a “time crunch,” one exacerbated by the fact that a league rule requires Nashville players to turn off their cellphones an hour prior to kickoff and to have the phones stay off for the duration of the game. There was also the fact that the visiting locker room at Exploria Stadium isn’t large enough to accommodate the entire roster, making communication even more difficult.

Meanwhile, matters were moving more quickly in other MLS cities. In Fort Lauderdale, Florida, the players from Inter Miami and Atlanta United met just before the scheduled kickoff and agreed not to play. The decision had already spread elsewhere, and with players organizing, the push to postpone the remaining games reached a tipping point.

A source with knowledge of the situation said that around the time the Orlando-Nashville match kicked off, MLS commissioner Don Garber convened a conference call of owners and team presidents to get a sense of what direction they wanted to head. The source said that while a majority of the teams wanted to postpone their matches, it wasn’t unanimous. Rather than leave some teams exposed, Garber made the decision to announce that the rest of the night’s games had been postponed.

That left Orlando and Nashville to carry on.

“The timeline was just a little too crunched, it was a little too soon for us to effectively communicate with other teams in the league about what was going to happen,” McCarty said.

“Obviously being the first game, that time frame is extremely crunched and extremely difficult to be able to have communication, meaningful communication with what’s going to happen.

“I got to the locker room. I put my phone down. I was focused on the game, figuring out what we’re going to do to try to beat Orlando. You hear rumors, you hear whispers. But ultimately, that’s what they are. We have had no firm conversations on what was going to happen before our game or with the other games. So I’m extremely proud of the rest of the players’ association for coming and being able to have that time to make that decision together. I wish that we could have part of that. But ultimately, that wasn’t the case.”

Nashville defender Jalil Anibaba, a founding member of the player advocacy group Black Players for Change, added that if a decision was made to go on strike, then everyone on both teams needed to be united, and there wasn’t sufficient opportunity to get everyone from both teams on the same page. That was why the game continued even after it became apparent that games elsewhere were being postponed.

“It’s nothing like that. We didn’t have enough time to organize.”

Atlanta United and Inter Miami players come together with referees to protest Wednesday’s match in response to the shooting of Jacob Blake.

Once the match began, the players felt they were in no position to stop. Nashville manager Gary Smith said he didn’t even know that games elsewhere had been postponed until he walked off the field after the match.

In terms of the future, it’s unclear if this weekend’s games might also be delayed. What is certain is that the issue of racial equality will continue to be front of mind throughout the league.

“At this point in time, it’s about unity,” Anibaba said. “We’ll continue to show that through our conversations internally, but also through our actions.”

“As far as I’m concerned, all we can do is listen and learn and try to use our platform to affect change in a meaningful and positive way.”