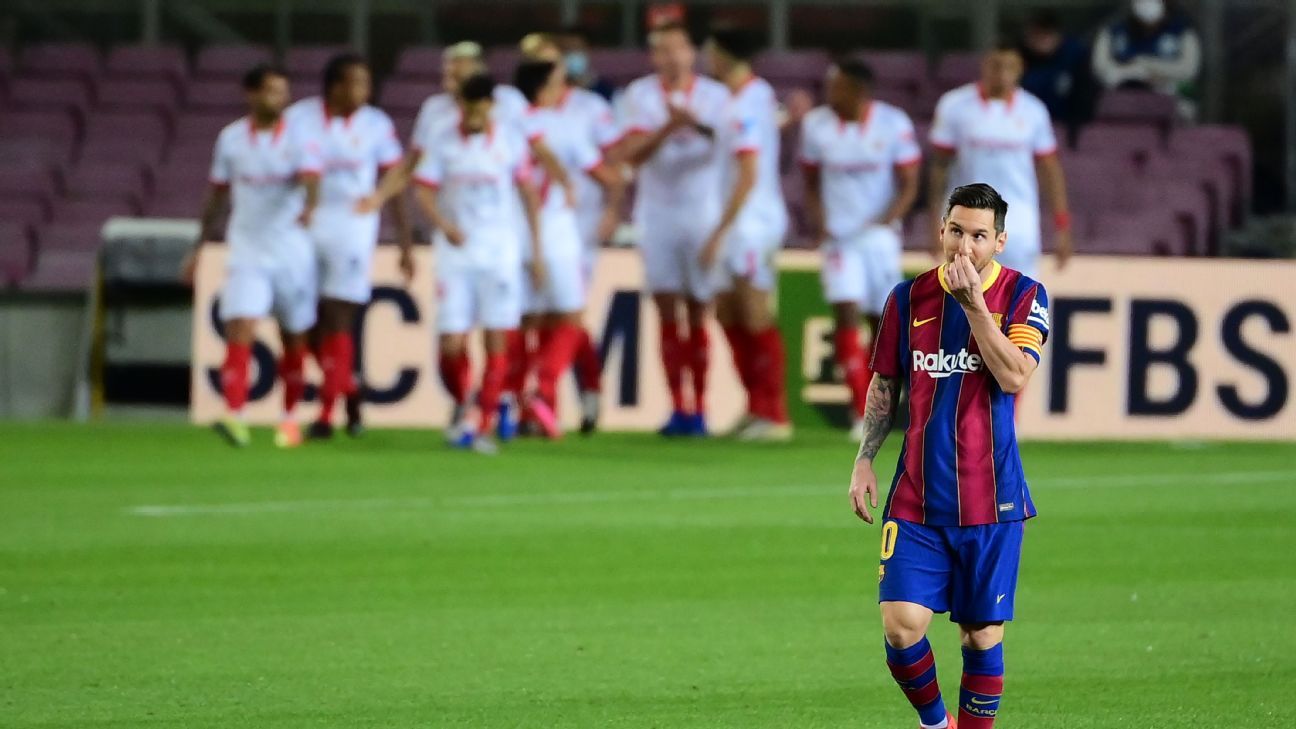 Rodrigo Moreno was so sure that he was leaving Valencia for Atlético Madrid that he emptied his locker at Valencia’s Paterna training ground and said goodbye to his teammates, only for the deal to be taken off the table again. With Ángel Correa’s move to Italy falling through, Atlético had been unable to raise the funds to make it happen. “Those who were offering are no longer offering,” said Anil Murthy, the president of Valencia.

That was a year ago. Six months on, Rodrigo was optimistic that he was about to go to Barcelona, only there was a problem then, too, and it was about as basic a stumbling block as there can be.

“We won’t entertain offers which are not backed by money,” Murthy said bluntly. “If you can offer real cash, then great,” Valencia’s president added. “If you can’t guarantee an exact kind of payment, then we can’t go through with it. As a responsible club, before you buy, you must sell. Last time it was Atlético; now it’s Barcelona.”

– Stream new episodes of ESPN FC Monday-Friday on ESPN+
– Serie A on ESPN+: Stream LIVE games and replays (U.S. only)

The next time, it was Leeds United. Six months on, Rodrigo finally departed Valencia for €40m. He was enthusiastic — he always is — and the excitement for a move to the Premier League was genuine, but he had gone from the verge of joining two of the biggest teams in Europe to a team that, with respect, isn’t. He had left a club that spent last season in the Champions League to join one that had spent it in the Championship. The money that Barcelona and Atlético couldn’t find, a team newly promoted to the Premier League could.

On the final day of the window, FC Barcelona were still scrambling, desperately trying to find the money to sign Memphis Depay. And that’s Memphis Depay, not Lautaro Martinez, or Neymar, or any of the other 59 players (yes, really) they’d been linked to. In the end, they gave up, unable to pay for him even though Lyon were desperate to sell, lamenting the lack of a deal that slipped through their fingers. Eric García hadn’t joined from Manchester City, either. As Ronald Koeman admitted: “The financial situation is very difficult.”

Six hundred kilometres away, on the same day, a car pulled up outside La Liga HQ. The occupants went inside and deposited the money that triggered Thomas Partey‘s €50m release clause at Atlético Madrid. On the final day of the transfer window, they’d lost their central midfielder to Arsenal. On one level, at least, he too had taken a step down, but he was entitled to feel it was a step up.

Thomas won’t play Champions League football this year; his former teammates will. As for Real Madrid? They didn’t spend anything on transfers this summer for the first time in 40 years.

There was nothing Atlético could do to prevent Thomas departing, and this is a recurring nightmare — so recurring, in fact, that the logical conclusion is that however much Atlético profess to be the victims, and however much they portray Thomas as the bad guy who walked out, it might not be a nightmare at all. In the past 18 months alone, Thomas (€50m), Rodri (€70m), Antoine Griezmann (€120m) and Lucas Hernandez (€80m) have all triggered their buyout clauses to leave, just as Arda Turan, Diego Costa, Falcao and Sergio Aguero did before them. In return, they have raised €320m.

Barcelona, meanwhile, raised just €1.5m on Luis Suárez, Ivan Rakitic, Rafinha and Arturo Vidal. In fact, it cost them €8m to get Suarez to leave. Madrid made zero on the departures of James Rodríguez and Gareth Bale. They, though, did make €40m on Achraf Hakimi (to Inter Milan), €30m on Sergio Reguilón (to Tottenham) and €13.45m on Óscar Rodríguez (to Sevilla).

Something similar was happening across Spain. There were certainly some successes in the transfer market — Villarreal, Sevilla, Granada, Osasuna, plus David Silva turning up at Real Sociedad — but this has been a difficult window. And a concerning one, too. Valencia lost almost half of their typical starting XI: Ezequiel Garay didn’t get an offer to renew, Dani Parejo and Francis Coquelin went to Villarreal, Rodrigo joined Leeds and Ferran Torres signed for Manchester City in return for €23m. They didn’t sign one player to replace them, prompting manager Javi Gracia to offer his resignation.

Spanish clubs spent €409m on transfers, making €405m back in sales. Compare that to last summer: €1.3 billion in purchases, €992m in sales. As Koeman said: the financial situation is difficult, and not just at Barcelona. In part, it’s a temporary issue, provoked by a coronavirus crisis that had already enforced emergency measures on every top-flight team.

Barcelona claimed that their projected income is down by over €200m this season and that they have made a €97m loss –despite cost-cutting measures, particularly on player salaries, saving them €79m. Madrid were clear that this was a summer for reduction and consolidation, not investment: having forced pay cuts on their players it would not be right to sign, and there wasn’t the money to do so anyway. Atletico’s limited funds were invested in Luis Suarez … for whom they paid no fee up front. And then, right at the end of the transfer window, in Lucas Torreira, who also came on a “free” loan.

The focus is on incoming money, not incoming players. It’s on fortifying themselves for the future. Madrid have made almost €100m in sales, and savings on salaries. Barcelona have saved close to €80m on salaries, around 12%, which was their most pressing need. The money from Thomas is welcome for Atletico, and because he left on deadline day, they will be allowed to sign. Meanwhile, Madrid’s actions this summer are explained at least in part by a process of consolidation to prepare an eventual bid for Mbappe.

This situation is unique and entirely unexpected. The figures will increase in the future. On some levels, clubs’ frugality is to be applauded; they have avoided some of the wild spending of before, helped by league rules that take economic controls seriously at last.

But fans still aren’t in stadiums, so the next financial year might be as bad. Mbappe is not guaranteed to come to Spain, and he certainly wouldn’t be cheap. Lautaro Martínez has not just been forgotten about for now by Barcelona, but probably for good. And the league’s financial controls stopping clubs from spending what they don’t have mean that of the €50m Atletico got for Thomas on deadline day, they will be able to invest just under €12m in signing a replacement, if they sign one at all — something that helps to underline how serious the situation is.

Nor is it just about this season. The fear is that this goes deeper and will be more lasting, the pandemic perhaps revealing issues that were endemic. Most of the economic challenges that Spanish clubs faced because of the coronavirus are replicated elsewhere, in leagues all around the world, but the impact has not been the same. At least, it’s not been the same when it comes to their great competitor: They won’t admit it openly, but at La Liga, they’re worried about the Premier League growing to eclipse all others.

While Spanish clubs have spent 65% less than they did last year, England‘s top-flight teams have dropped 22%, the figures proportionately even higher than they were before. And even that Spanish figure needs to be seen in context.

Sevilla, the most active of Spain’s clubs, spent €69m this window, while Granada have allowed themselves a €20m outlay, yet Barcelona were still the team that spent the most at just short of €125m. And that includes €60m spent on Pjanic just before the financial year ended — an exchange deal involving Arthur going in the other direction for €72m, which was all to do with economic engineering and nothing to do with football — plus Trincao (€30m), Matheus (€7m) and Pedri (€5m), all of whom had deals agreed in advance.

Only Dest was truly a signing made in this window, and he came after Barcelona had dealt Semedo to Wolves for €30m — another top La Liga player bound for the Premier League.

Sid Lowe explains why he thinks Sevilla “privately believe” they can compete for the La Liga title.

English teams have spent almost four times what La Liga teams have this summer. At €250m, Chelsea alone spent well over half of what all the Spanish clubs did put together. Collectively, English clubs have spent over a billion euros. It is not always a sensible policy, and such largesse can cause problems later, but if there was unease in England, or any concern over possible consequences, the feeling as the window closed in Spain was a troubling one too.

There’s a nagging feeling that La Liga’s product is being picked away at. English clubs have signed Thiago, Werner, Havertz, Edinson Cavani and Donny van de Beek despite links to Spain. From Spain, they have taken Gareth Bale and James. Sergio Reguilón and Semedo are full-backs who went for fees normally associated with forwards.

It wasn’t just the biggest English clubs, either: Rodrigo left Valencia, and not to Atlético or Barcelona, but Leeds United. Diego Llorente was there, too, leaving Real Sociedad for Leeds as well. It made for a fun international break: Leeds had as many players in Spain’s starting XI in their recent friendly vs. Portugal as Madrid and Barcelona did put together. Of those 11 players that night, only four play in La Liga.

It’s a concern, although it’s not all bad news — and not just because emigration can be good for the national team.

There still hasn’t been a Ballon d’Or winner from an English team for over a decade, and some of the world’s best players are still here. Luka Modric, Toni Kroos, Frenkie de Jong, Antoin Griezmann, Saúl and more, plus a generation emerging from Vinicius Jr. to Fati Ansu. Parejo left Valencia, but only to go 50 minutes up the road, to Villarreal. Ivan Rakitic and Suárez departed Barcelona, but they stayed in Spain. And so, too, did Lionel Messi, unwillingly, but he did.

“Any league would like to have him,” said Javier Tebas, the president of La Liga. For now, only one does.