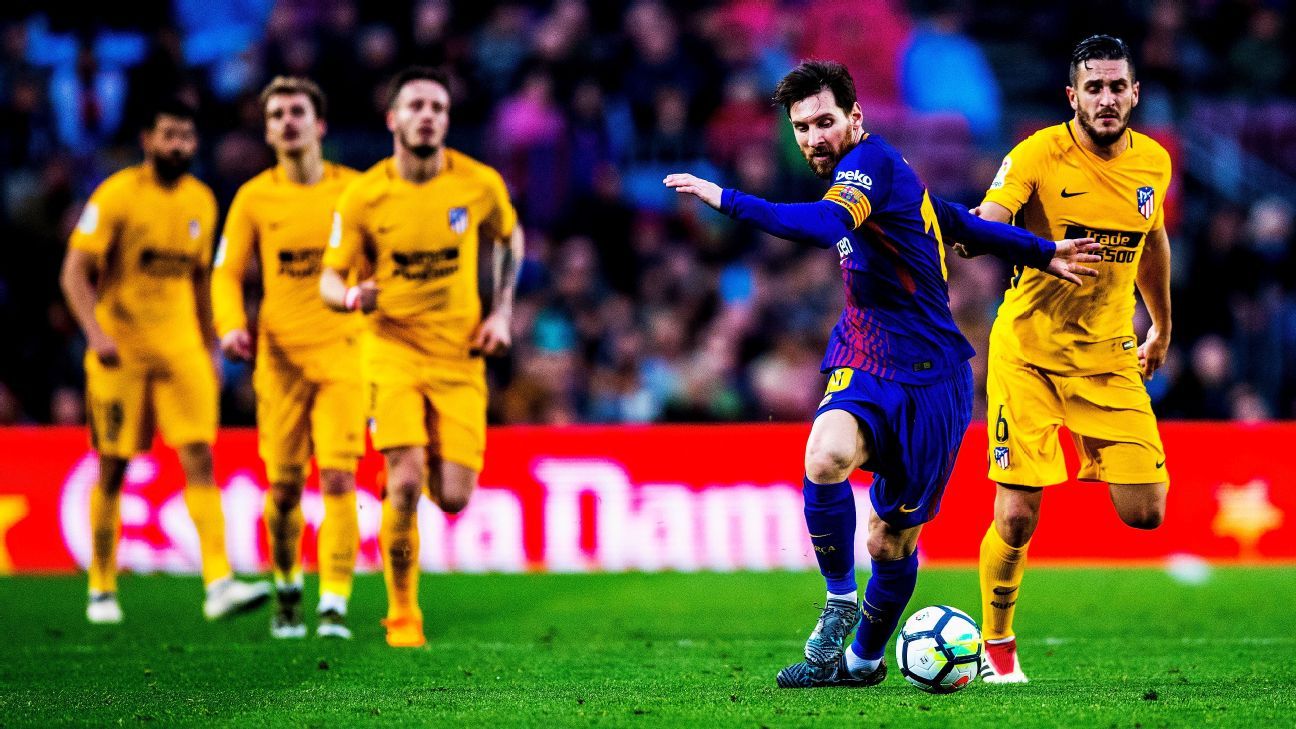 
Atletico Madrid’s trip to the Camp Nou on Sunday was, understandably, billed as La Liga’s most crucial game of the season: an Atleti win, and it was game on; a Barcelona win, and it was game over. It was the latter, of course, and more than the mere result summarising the overall La Liga season, it was the precise nature of the winning goal that encapsulated Spain’s top flight this term.

There was no surprise in the identity of the winning goalscorer: it was Lionel Messi, for his 600th career goal. Messi’s strike, though, was a free kick — his third in as many weeks — and came from a foul the Argentine had won himself, having been tripped by Thomas Partey. And therefore, while the records won’t show it, this was essentially a Messi goal, assisted by Messi. No clever one-twos, no flowing passing move, nothing to demonstrate Barcelona’s overall attacking play; just the individualistic brilliance of Barcelona’s main man. This is not the Barcelona of the past few seasons.

Overall, the contest was poor. Atletico arrived at the Camp Nou, as ever, looking to sit back, soak up pressure and play on the counterattack. What was different from the usual battle, though, was that Barcelona were primarily concerned with preventing those counterattacks, keeping a very solid shape through the centre of the pitch, barely pushing their midfielders on. This was, in part, a response to the nature of the game: a must-not-lose rather than a must-win.

But it was also a reflection of the new Barcelona under Ernesto Valverde, the most functional and joyless Barca we’ve witnessed for 10 years, since the arrival of Pep Guardiola as coach in 2008. The team who have set the standard for possession-based, attack-minded football now lack cohesion and interplay in the final third.

When Andres Iniesta went off injured on Sunday, the possible replacements were the entirely ordinary pairing of Paulinho and Andre Gomes, neither of whom feel like proper Barcelona midfielders. Philippe Coutinho’s arrival theoretically adds guile and creativity, but so far the Brazilian has played in an individualistic manner, running down blind alleys and shooting when he should be passing. Ivan Rakitic was probably Barcelona’s best midfielder on Sunday, largely because of his industry and energy rather than his technical quality.

The consequence, then, was a game that felt entirely unnatural for La Liga title decider. Two sides packing the centre of the pitch for defensive rather than possession purposes felt more like an Italian or a South American game rather than a Spanish game. It was summarised by the fact the two sides were playing Luis Suarez and Diego Costa up front, the first time these two strikers had met. Spanish football in recent years has largely been based around clever interplay and exploring space, but these are two aggressive forwards who like playing up against defenders, looking for physical battles rather than space. Both are capable of brilliance, but both are essentially ugly forwards, and their sides produced an ugly game.

Yet Barcelona will surely finish top of the league, which reflects the relative mediocrity of their rivals this season. Real Madrid’s season has been downright dreadful, although realistically their fine form of last season is less explicable than their average showings this season. This is a team packed with outstanding individuals, but one that has largely lacked an obvious identity under Zinedine Zidane, depending upon moments of genius to compensate for tactical shortcomings.

This is largely what Real Madrid yearn for. It’s always been a club based around players rather than managers. But when individuals don’t perform, Real don’t have too much to fall back upon.

Perhaps the point is not so much that the big Spanish sides aren’t very good, more that they’re simply not very Spanish. Valverde has taken Barca slightly away from tiki-taka, while Zidane has always been a pragmatic manager who indulges attackers and asks the midfield to take a very solid, cautious structure, much as he was accustomed to when playing in Serie A. Diego Simeone is the most revered coach in the league at the moment, but his philosophy has largely been developed in response to Spanish-style football — this is a man who won the league with less than 50 percent of possession four years ago.

Ironically, as the approaches of those three feel increasingly Italian, it is arguably an Italian, Vincenzo Montella at Sevilla, whose overall coaching philosophy is the most Spanish. He hasn’t yet stamped his authority upon this side, yet some of his tactical moves have been interesting. In last week’s victory over Malaga, he asked his full-backs to take up very narrow positions in possession, much as Guardiola has often asked of his players. This proved very effective in terms of defensive transitions, and allowed his wide players to hug the touchlines and stretch the play; not a quality we’ve witnessed much from Barca, Real or Atletico this season, who have all largely preferred variations on narrow 4-4-2 systems that have produced scrappy, low-quality matches in matches between them.

For all this, however, writing off the Spanish sides in European competition this season would be foolish, not least because The record of Barcelona, Real Madrid, Atletico and Sevilla in European competition in recent seasons is extraordinary, both on an individual and collective basis. Spain’s big sides might be less technically gifted than usual, but they’re defensively stronger and more tactically astute than before. Furthermore, without a title race going down to the wire, the big sides can afford to concentrate on European competition, preparing for midweek matches both physically and tactically.

Atletico must be favourites for the Europa League, while Real’s first-leg performance against Paris Saint-Germain suggests they remain better in Europe than in domestic competition.

But in La Liga terms, it’s difficult to imagine this Barcelona side would have triumphed at any other point in the past decade, with the possible exception of 2012-13, when Real were self-destructing under Jose Mourinho and Barca were affected by Tito Vilanova’s illness. Messi is their saving grace, but Barcelona, and La Liga, used to offer so much more.