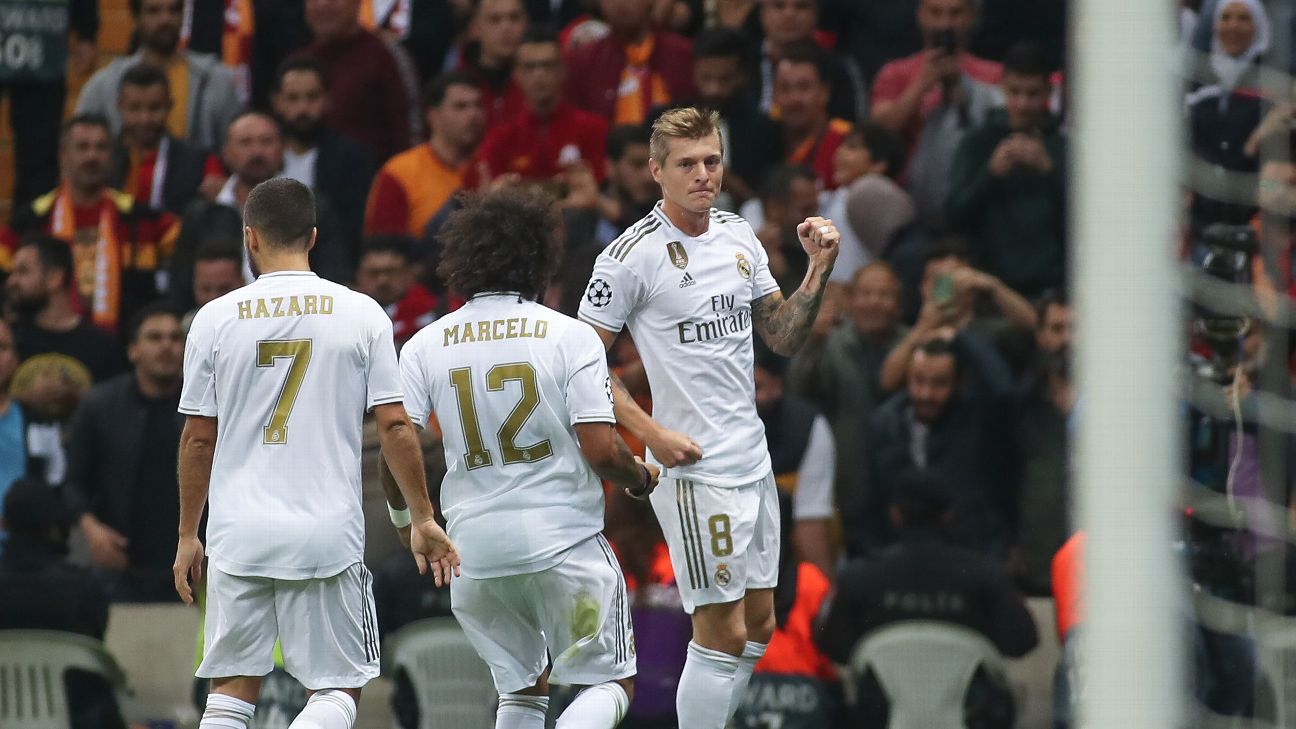 
Thanks to a 1-0 win over Galatasaray, Real Madrid left Istanbul with three crucial points to get their Champions League campaign back on track. In the hostile atmosphere of the Turk Telecom stadium, Real were slow out the blocks and could have gone behind had it not been for some smart saves from Thibaut Courtois. However, the 13-time champions of Europe weathered the storm, taking the lead midway through the first half thanks to a deflected Toni Cross effort.

The second half saw the travellers fail to kill the game off, with Eden Hazard and Karim Benzema wasting big opportunities. Ultimately, it wouldn’t cost the Spanish side, who were able to see the game out effectively, for a crucial and morale-boosting win.

Considering the amount of pressure heaped upon the shoulders of Eden Hazard in recent weeks, it was a welcomed return to form for the Belgian superstar, that will please Zinedine Zidane greatly. The 28-year-old provided an assist for the first goal, and generally played very well in a selfless performance. Further, the enduring class of Toni Kroos, continues to be an added bonus for the Madrid boss.

Real’s defence continues to be an area of concern. Too often, Galatasaray’s attack was able to unpick the Madrid back line with a handful of passes, and had the home side’s finishing been slightly more accurate, they would surely have taken the lead early on. Additionally, without the calming influence of Luka Modric, some of Real’s passing did become a tad too frantic, heaping more pressure on themselves than was necessary.

7 — Selection wise, there were few surprises, with the only shock inclusion being that of Rodrygo, who was drafted in for his Champions League debut. The Brazilian performed well, justifying his selection, on a night where Zidane, broadly speaking, got his starting XI spot on.

GK Thibaut Courtois, 7 — The Belgian stopper looked far more assured tonight, pulling off a number of crucial saves in the first half to keep things at 0-0. The saves were fairly straightforward, but everything he was asked to deal with, he did so convincingly.

DF Dani Carvajal, 6 — A less than convincing evening for the Spaniard, who was beaten on more than one occasion by the speed of Ryan Babel. Offensively, it was a more muted display than we are used to from Carvajal, who was kept busy with his defensive duties.

DF Raphael Varane, 6 — The World Cup winner was something of a liability in the first half, finding himself dragged out of position on too many occasions. His overall performance level raised significantly in the second period, as Real saw off waves of Galatasaray attacks fairly well.

DF Sergio Ramos, 7 — The Madrid captain began the game in a less than convincing fashion but improved as the game went on. Aerially, as you’d expect, he was dominant, dealing especially well with Galatasaray’s targeted crosses.

DF Marcelo, 7 — As ever, the Brazilian livewire looked to get forward at every opportunity, and had it not been for a few stray passes, he could have been in on goal on a number of occasions. Defensively, Marcelo was also responsible for a number of key clearances. A solid night’s work for the adventurous left-back.

MF Federico Valverde, 7 — A performance that won’t get the credit it perhaps deserves, as the Uruguayan performed much of the dirty work for Real admirably. Valverde won possession back repeatedly and was seldom wasteful when in possession.

MF Casemiro, 7 — A fine evening for Casemiro, performing his usual role of screening the back four with distinction. In terms of passing, his distribution was accurate if unspectacular, but as ever, he leaves the adventurous balls to his more creative teammates.

MF Toni Kroos, 8 — The German continues to hold off the ravages of age, as tonight’s performances once again highlights. Kroos was magnificent, helping to launch attacks, dispossess opposition players, and — most crucial of all, score the decisive goal. His first-half strike did take a fortunate deflection, but overall it was a terrific display for the veteran midfielder.

FW Rodrygo, 7 — Came into the side for his Champions League debut in perhaps the only real selection shock. While the Brazilian teenager may feel that he could have done a bit better with his shooting accuracy, the winger did link up particularly well with Hazard and Benzema to round off a satisfactory European debut.

FW Karim Benzema, 7 — The Frenchmen was a persistent thorn in the side of the Galatasaray defenders, putting in the kind of tireless shift that we have all come to expect by now. The only downside for Benzema will be the lack of a goal, something he will perhaps be disappointed by, given the handful of half-chances that he was unable to convert.

FW Eden Hazard, 7 — The talismanic Belgian was under the microscope tonight, after a series of less than convincing performances in La Liga. Hazard however, responded in perfect fashion, with a selfless display, culminating in an assist from Kroos’ opener. A good performance, even if he did somehow miss an open goal after rounding the keeper.

MF James Rodriguez N/R — Displayed one or two nice touches, but had little effect, after coming on with just over 10 minutes to go.

FW Luka Jovic N/R — Came on in the 81st minute, which was too late to make an impact.