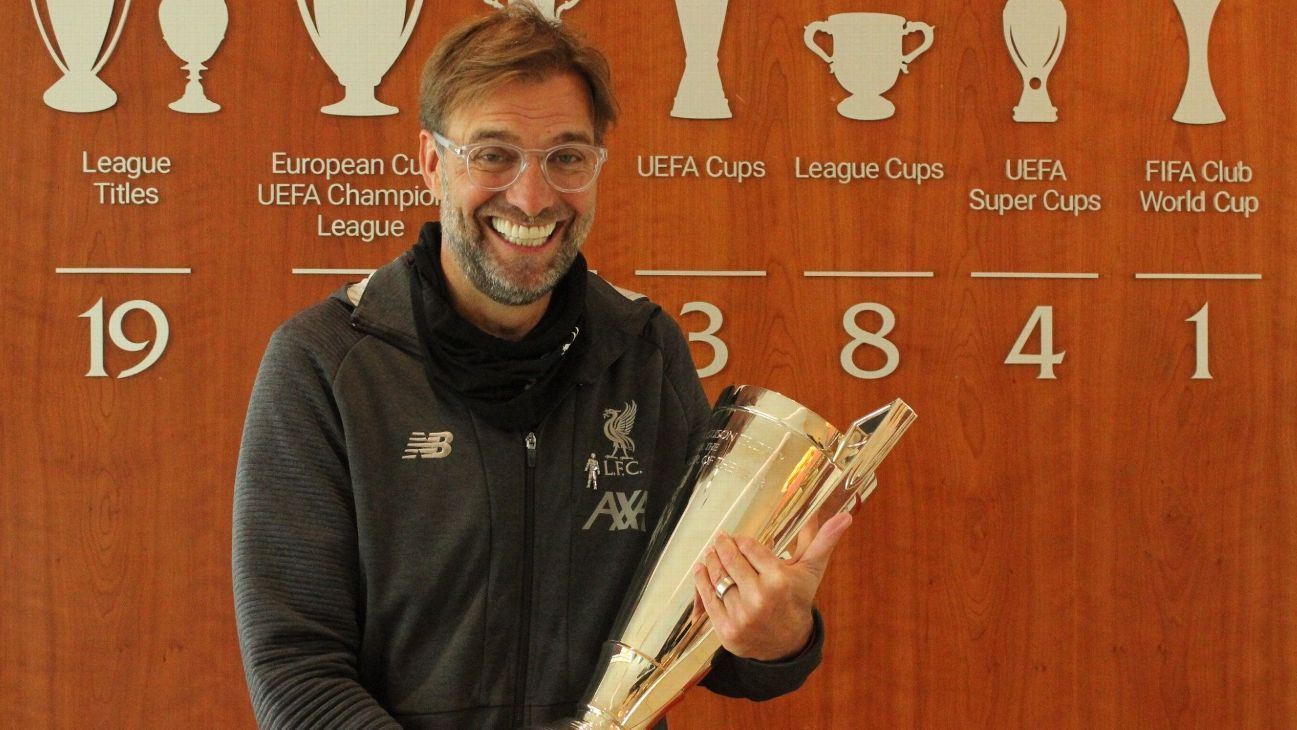 
Jurgen Klopp has to find even more space in his trophy cabinet after being named the League Managers Association (LMA) Manager of the Year on Monday after ending Liverpool‘s long wait to win the Premier League title.

The man after whom the award has been named, Sir Alex Ferguson, applauded Klopp on his remarkable achievement via a video message to present the prize.

Manchester United‘s legendary former manager even forgave the German for waking him up in the early hours of the morning to tell him he’d won the league!

“Jurgen, fantastic,” Ferguson said. “I have spoken about Leeds United, 16 years in the Championship, Liverpool, 30 years since winning that league: incredible.

“Really thoroughly deserved. The performance level of the team, really outstanding. Your personality ran right through the whole club. I think it was a marvellous, marvellous performance.

“I’ll forgive you for waking me up at half past three in the morning to tell me you’d won the league. Thank you. But anyway, you’ve thoroughly deserved it, well done.”

Sir Alex Ferguson presents Jurgen Klopp with the LMA Trophy and explains why he called him at 3am.

Klopp was equally gracious in return, likening his first ever encounter with Fergie as akin to “meeting the Pope.”

He said while holding the award: “I know it’s not 100% appropriate as a Liverpool manager but I admire him.

“I remember he was the first British manager I met. We had breakfast. I’m not sure how much he remembers but I remember because for me this moment was like meeting the Pope. It was absolutely great and from that first season we clicked.”

Jurgen Klopp reveals his “love” for Sir Alex Ferguson and recalls meeting him for the first time.

Klopp topped a strong shortlist to be named Manager of the Year which included last year’s winner of the award, Sheffield United boss Chris Wilder, who once again exceeded expectations by guiding his newly promoted side a comfortable top-half finish and almost sealing a place in Europe.

The pair are likely to feature heavily once again when the Premier League Manager of the Year award is announced next month.

However, as outstanding as Wilder’s job has been, there can be little doubt that Klopp is thoroughly deserving of the recognition after wrapping up the top-flight title with a record seven games to spare.

Liverpool galloped to glory by winning 32 of their 38 games (equalling the league record) and amassing 99 points (just one point behind Manchester City‘s record total). They also finished 18 points clear of City in second place, which is a commanding margin only ever bettered once in top flight history — by City themselves (19 points) back in 2017-18.

Lest we forget, the Reds also put together the joint-longest winning streak (18 consecutive games) by any side in English top-flight history, while remaining unbeaten at Anfield all season for the third league campaign in a row — another new club record.

In fact, before the shock defeat at Watford in February, Liverpool had gone 44 Premier League games without a loss — a run that spanned back to the previous January and has only ever been bettered (49 games) by Arsenal‘s fabled “Invincibles” team of 2003-04.

In short, Klopp could hardly have been more dominant in ending the club’s three-decade wait to be kings of England again. No wonder he had such a big smile as he accepted the award!

The newly-crowned LMA Manager of the Year joins some illustrious company, with many of the Premier League’s greatest, most successful and most well-regarded managers receiving the award since 1993.

If you’re looking for Jose Mourinho, we can tell you now that he’s never won it despite winning three Premier League titles with Chelsea. Not even once!

Ferguson has won the award more times than anyone else, with five to his name. The Scotsman took the inaugural award in 1993 but then had to wait until United’s treble-winning season (1999) to claim it again, picking up three more before his retirement in 2013.

David Moyes is next on the honour roll having been named LMA Manager of the Year no less than three times between 2003 and 2009 during his Everton days.

Only two other managers have taken the crown on multiple occasions, with former Arsenal boss Arsene Wenger (2002 and 2004) and Steve Coppell having both won twice, the latter for the wonders he worked with Reading in 2006 and 2007.

Pep Guardiola only has the one LMA Manager of the Year award in his extensive collection, having won in 2018 on the back of Manchester City’s all-conquering 100-point campaign.

Including Klopp, a total of 15 managers have won the award once, with the likes of Claudio Ranieri (2016) and Antonio Conte (2017) receiving fairly straightforward commendations for winning the Premier League title with Leicester City and Chelsea respectively.

Klopp isn’t the only Liverpool manager to have been named LMA Manager of the Year. Brendan Rodgers was the first Reds boss to win the award in 2014 after his side finished runners-up in the Premier League with 101 goals to their name.

Alan Pardew is one of the more unlikely names on the list but he took the LMA’s top gong in 2012 after guiding Newcastle to European qualification. Pardew is also the only English manager to date to have won the LMA and Premier League Manager of the Year awards in the same season. He was infamously given an eight-year contract shortly thereafter, but left for Crystal Palace in 2014. Roy Hodgson was acclaimed in 2010 on the back of Fulham’s scarcely believable adventure in Europe, while George Burley (Ipswich in 2001), Frank Clark (Nottingham Forest, 1995), Dave Jones (Southampton, 1998), and Joe Kinnear (Wimbledon, 1994) have also been bestowed with the LMA award for outstanding single seasons.

While technically all managers in the four professional divisions of English football are eligible, the LMA award has only been won by a manager outside the Premier League on six occasions.