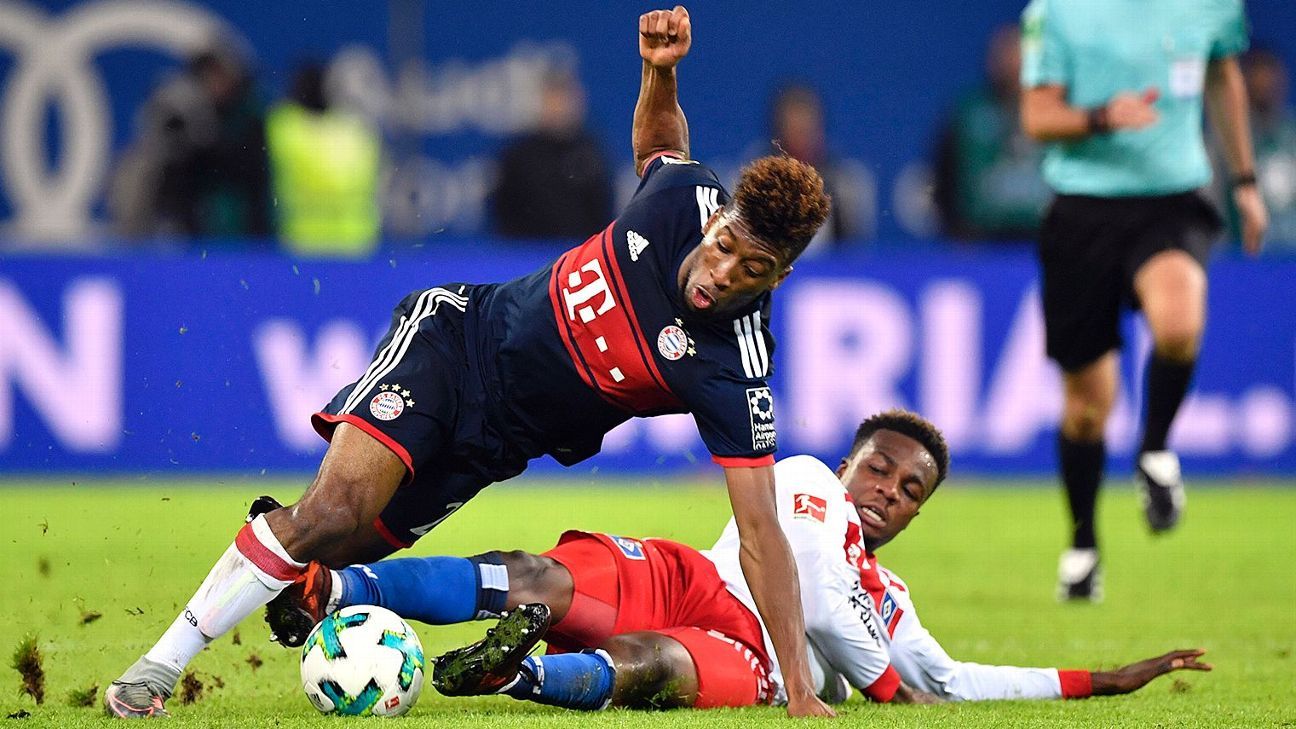 
Bayern Munich were made to work hard for a third straight win under Jupp Heynckes, but scraped past 10-man Hamburg 1-0 thanks to record signing Corentin Tolisso’s close-range tap-in on 52 minutes.

Chasing an unprecedented sixth Bundesliga title in a row, Bayern moved level on points with Borussia Dortmund, who lead on goal difference by three goals. The gap was five points when Jupp Heynckes took over, but three straight victories, 9-0 aggregate without letting in a goal, is a pretty impressive return all round.

It was a turgid and goalless first half with Hamburg reduced to 10 men after Gideon Jung’s harsh red card for a foul on Kingsley Coman. Despite their man advantage, Bayern made heavy weather of it against a side that now has not scored in their last four home matches and collected just a single point from their last seven.

6 — First Bundesliga away game since a tearful farewell against his old side Borussia Monchengladbach in 2013, but made life unnecessarily difficult by making five changes to his starting XI.

GK Sven Ulreich, 7 — A top save on Andre Hahn kept Bayern’s fragile lead intact, securing his third clean sheet in six Bundesliga games and he has been much improved since speaking to ESPNFC.

DF David Alaba, 6 — A quieter game than of late, but it was the Austrian’s cross that caused chaos, leading to the opening goal.

DF Rafinha, 6 — A capable understudy for the legend Philipp Lahm and now the wunderkind Joshua Kimmich at right-back.

MF Corentin Tolisso, 7 — Anonymous in the first half, but popped up in the right spot to score the crucial only goal of the game. Bayern’s record signing nearly added to his second league goal, but headed against the post as Bayern struggled to sew the game up.

MF Arturo Vidal, 6 — Ineffective in the opening period, but grew into the game with the man advantage. Vidal had a shot deflected narrowly wide just after the break and tested HSV keeper Christian Mathenia on a few more occasions in an improved second half.

MF Kingsley Coman, 8 — Seems to be coming of age since Franck Ribery’s injury. He earned the game-changing red card and proved a constant menace to the HSV defence with his pace and panache.

MF James Rodriguez, 4 — A first competitive start under Heynckes and only his second in the Bundesliga since joining on loan from Real Madrid. Largely anonymous but for picking up a yellow card for a foul on Aaron Hunt at the end of the first half. He was replaced by Thomas Muller at the break.

MF Arjen Robben, 7 — Assumed captaincy duties in Muller’s stead for the first half, firing Bayern’s first chance into the side netting on 20 minutes. He was still going strong in the final minutes but could not grab the goal his efforts deserved, firing wide from an angle.

FW Robert Lewandowski, 6 — After finding the net in each of the last five Bundesliga games, he enjoyed a quiet game by his lofty standards. It was most definitely not his day in front of goal, typified by a last-gasp chance slipping past the post in the final seconds.

MF Thomas Muller, NR — Rejuvenated under Heynckes, Muller came on at the break to thread through the cute pass to Tolisso for the match-winning goal. Muller has now provided an assist in each of Heynckes’ three games. Unfortunately, after tweaking a right thigh muscle, he had to go off immediately. But his stay on the pitch was a highly effective seven minutes.

MF Thiago, 7 — Replaced the injured substitute Muller at 1-0 vs. 10 men. He saw plenty of the ball and rattled the post with a curling shot on 70 minutes.

DF Joshua Kimmich, NR — Scored the only goal of the game here last season in the final seconds, but had to make do with only a few seconds playing time this match as a late substitute for man-of-the-match Coman.