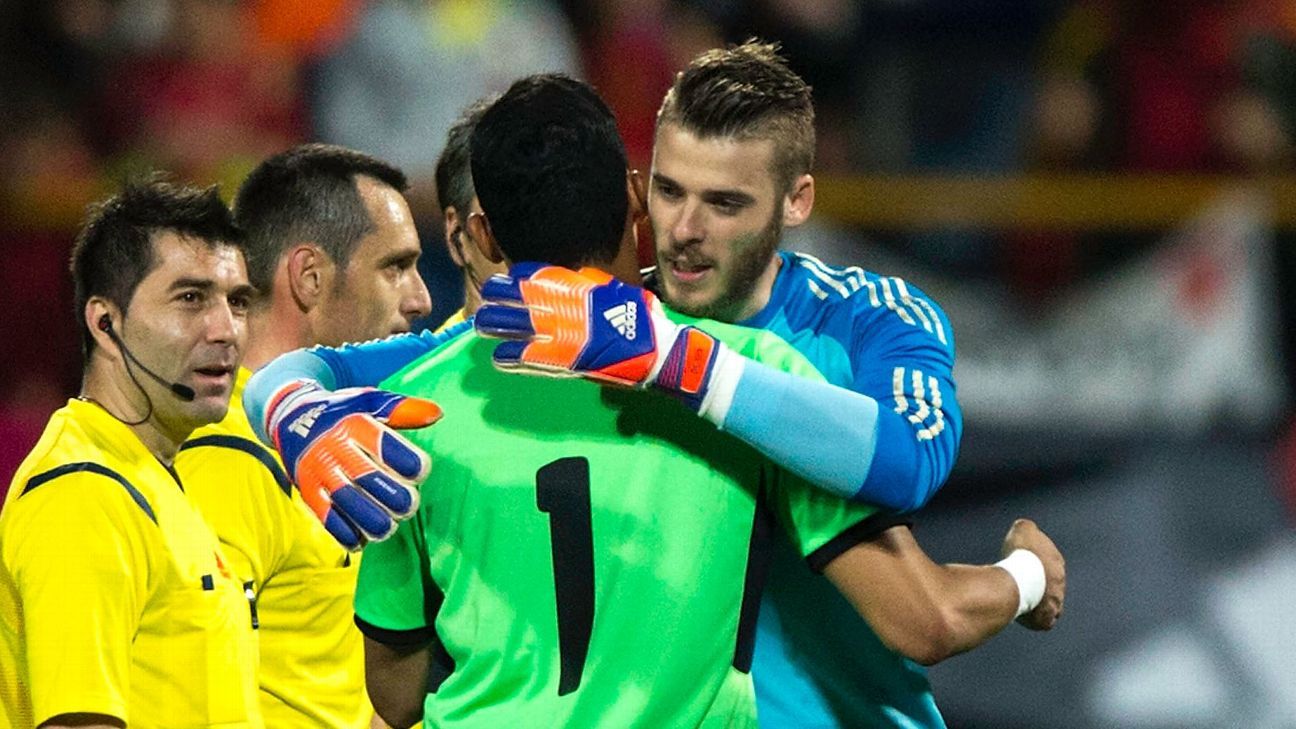 
Real Madrid goalkeeper Keylor Navas says he is looking forward to winning many more trophies with the club in the future — and that the idea of being protected by coach Zinedine Zidane makes him laugh.

Madrid have again been linked this summer with Manchester United goalkeeper David De Gea, a long-time target of club president Florentino Perez, with sources close to the Old Trafford outfit insisting recently that they expect a new offer for the Spain No. 1 in the coming weeks.

The speculation has spiced things up ahead of the two clubs’ International Champions Cup meeting in Santa Clara next Sunday, although Madrid have given no indication that they are planning to push through a move for the player they embarrassingly missed out on two summers ago.

Navas told a news conference at UCLA ahead of a seventh straight day of preseason training that his “dream” of winning more trophies at Madrid remained just as strong — even after he helped secure back-to-back Champions League titles in the last two seasons.

“I am very happy to form part of this great club,” the Costa Rica international said. “The day of my presentation with the president is one of the things I will always keep in my heart. When you arrive at the biggest team in the world you want to be part of its history. And put your country into that history too. That dream remains alive for me, and I am looking forward to winning more trophies [with Madrid].”

Navas’ position came under threat last winter after a number of high-profile mistakes, but there were then reports after he returned to form in the latter stages of the Champions League that Zidane had promised him he would keep his place as the club’s No. 1.

“My relationship with Zidane has not changed,” he said. “It’s funny to say that he is giving me special treatment, as it has always been the same. He gives us a lot of confidence, is very close. [But] I felt nothing different than the year before.”

Navas also maintained that Cristiano Ronaldo, whose future remains in doubt because of his frustration at facing tax fraud charges in Spain, should remain at Madrid as it was the right club for the world’s best player to represent.

“I don’t know, nobody ever knows [what will happen], but we all want him with us,” he said. “Obviously the world’s best player should be at Real Madrid. We hope he returns from holidays soon, but we should let him relax in peace with his family and friends. We have another long year to come, with new challenges for everyone, and I believe he will be with us for that.”

Navas said he hoped Alvaro Morata, linked this week with a move to Milan, remained a teammate so he did not have to face the striker with a rival team in future.

“As a teammate I am always happy to have the best, and Alvaro is one of them,” he said. “Everyone at the club, the players, want him with us. Obviously when you have a great player you do not want to face him as opponent. He helped us a lot last season and next season can help us more too. I hope he is with us many more years.”

The former Levante shot-stopper was a little less sure when asked whether right-back Danilo, a reported target of Premier League side Chelsea, would still be at the Bernabeu when 2017-18 began.

“He looks very well, he is a great professional, and is very relaxed and happy,” Navas said. “He looks very motivated for this preseason, training hard, as all the team are. He is part of the group, not nervous, or wanting to leave. All players want to be at Real Madrid and I hope we can count on him many more years.”