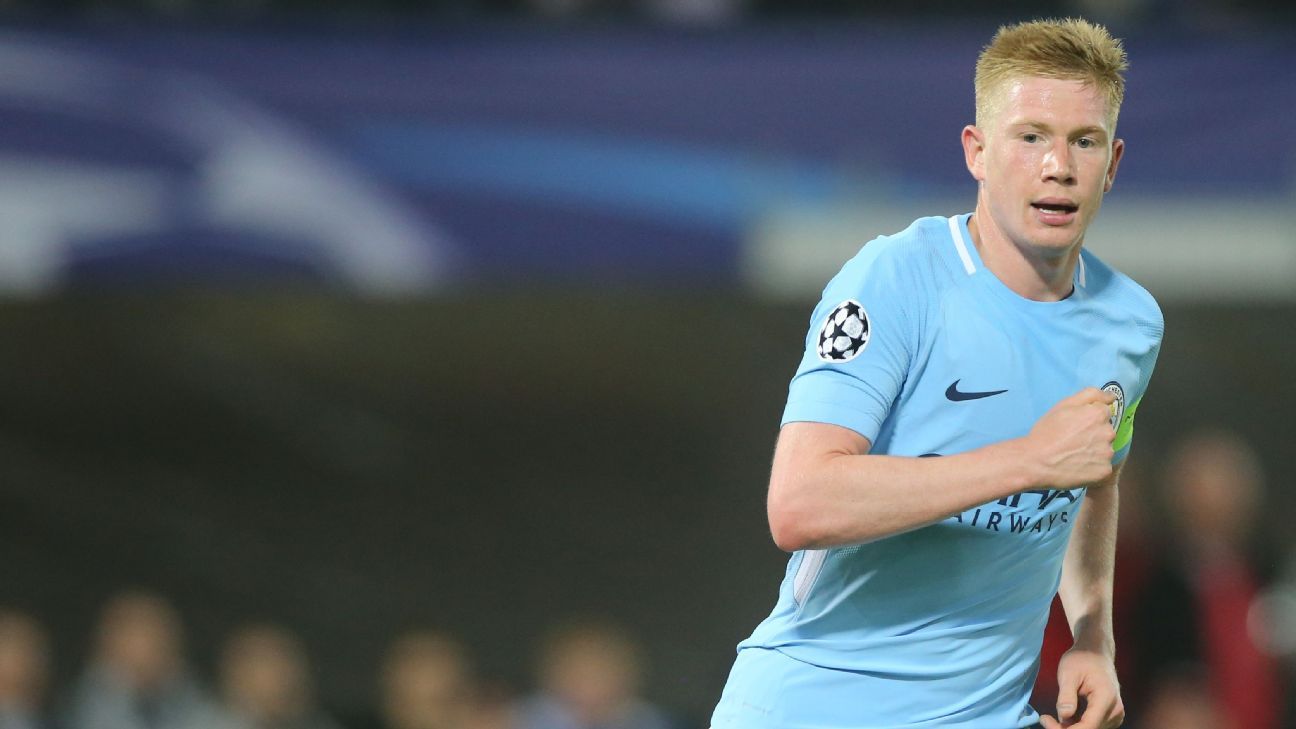 
Manchester City are in ominous form. They have won nothing yet and it’s wise to remember that this time last season, they were in even better form and would go on to win their first six Premier League games. But there is something different this time around. They have spent and spent wisely, recruiting a fearless goalkeeper in Ederson and swifter, fresher full-backs Kyle Walker and Benjamin Mendy. They have not one, but two electric strikers.

And Kevin de Bruyne is in the form of his life.

De Bruyne has frequently impressed since he returned to England with Manchester City in 2015, but it’s never been clear exactly where his best position lies. He could play in the middle, off either flank or behind the striker but now, having been dropped back to a regular, deeper role in the centre of the midfield, the debate is over. This is where he belongs, pulling the strings and spearing defences with perfect through balls.

It was De Bruyne who broke Liverpool’s resistance before the dismissal of Sadio Mane, threading the ball between Emre Can and Ragnar Klavan to release Sergio Aguero. It was De Bruyne who saw fit to hassle and dispossess Dale Stephens on the first day of the season to start the move that finally opened up Brighton and Hove Albion. Roll back through Manchester City’s brightest moments of the season so far and you’ll usually find De Bruyne involved somewhere in the process.

De Bruyne is no puppy-fat youngster now. He turned 26 in June and looks to be entering the peak years of his career. He is more aware of the game around him and his ability to spot a pass has improved. He has allied his natural talent (of which there is no shortage) to a developing wisdom of the game. And it is no wonder at all that according to reports this week, City are opening contractual talks with just under four years left to run on his present deal. Any club in the world would be improved by his arrival.

It says everything you need to know about modern football that his £115,000 per week deal now seems to under-value him.

It’s all so different from 2013 and his slow divorce from Chelsea. Sent out on loan to Werder Bremen, De Bruyne was on the brink of a move to Borussia Dortmund to link up with Jurgen Klopp. “Kevin was convinced that Chelsea would let him go,” Belgian journalist Kristof Terreur tells ESPN FC. “But because Mourinho couldn’t sign the midfielder he wanted, he told De Bruyne to come back to Chelsea and that he would get his chances in all the competitions. De Bruyne wanted to push for the Dortmund move but as he was under contract, he chose not to make life difficult.”

But when Mourinho left De Bruyne in the stands for the European Super Cup, the youngster was crestfallen.

“Away with the national team soon afterwards, he doesn’t train at his best level,” said Terreur. “Manager Marc Wilmots even mentions it in his press conference. Mourinho thinks ‘If a player reacts to be left out like that, is he ready for the challenge of playing in a big team?'”

Their relationship did not improve with time. Indeed, it rapidly worsened with accusations of poor training performances, leading to De Bruyne’s quote that “maybe they should organise open training sessions so that everyone can see I’m doing well.”

“He has a meeting with Mourinho in which the manager explains with stats why he isn’t making the first team,” said Terreur, “but De Bruyne doesn’t think its fair to compare him with his teammates in this way because he has barely played.” With no detente on the horizon, De Bruyne returned to Germany, this time with Wolfsburg and, in spite of Mourinho’s initial wishes, on a permanent deal.

“It took him a little while to settle the second time round in Germany,” Bundesliga expert Archie Rhind-Tutt told ESPN FC. “The turning point was his dismissal against Augsburg two months after his arrival. From there, you could basically argue that he carried the team. He was phenomenal in the 2014/15 season, driving Wolfsburg to second place and a first ever DFB-Pokal win. He equalled the Bundesliga record for assists that season with 22 and memorably turned up in the big games too. He scored twice against Bayern Munich in a 4-1 win and scored in the cup final win against Dortmund, ruining Jurgen Klopp’s farewell game.”

That spell of form was enough to earn him the move to Manchester City and while there would be no better way to prove a point than to be the leading light in the team that denies Mourinho a title, is that what he wants?

“Kevin doesn’t really want revenge on Mourinho,” says Terreur. “He wants to prove a point but he’s the guy who looks forward. He always says those six months weren’t that bad at all. Because he started to see things differently. He doesn’t consider it as a failure. In the end, both parties got a good deal. Chelsea signed Nemanja Matic and won the title in 2015 and he got his big move to City where he’s so happy right now.”

It goes without saying that he’ll be even happier should City’s form continue and end with a league title.

Real Madrid rival Chelsea for Juventus’ De Ligt
There’s more to Barcelona-Bayern Munich than that 8-2 result; this is a rivalry with a dramatic history
Team on track? Berhalter safe? Players with stock up / down?
Former Chelsea, Real Madrid boss Guus Hiddink retires
Attention-grabbers, struggling giants and the best to never win it