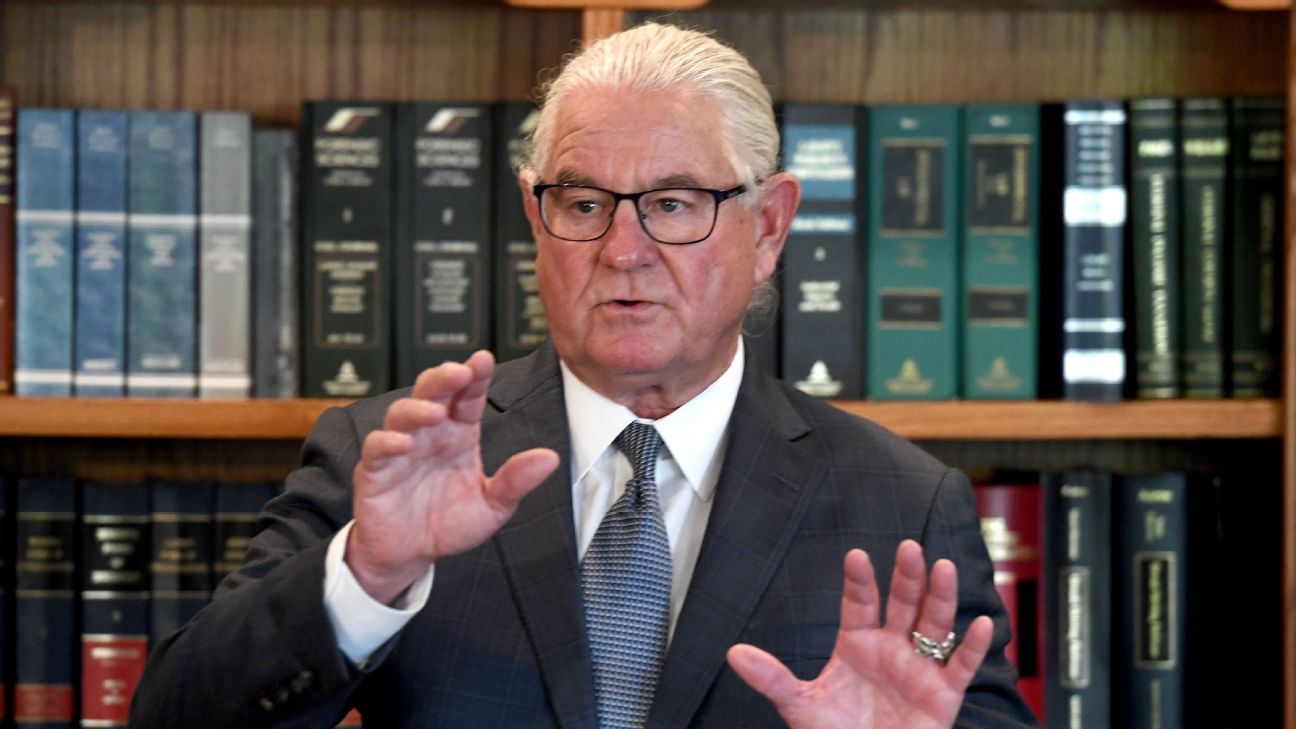 The woman accusing Cristiano Ronaldo of sexual assault has been interviewed twice by law enforcement officers in recent months and plans to cooperate further, her attorney said on Wednesday, as the Las Vegas police department has reopened its investigation into the case that centres around one of the sports world’s most famous athletes and an alleged assault from 2009.

Kathryn Mayorga, who has filed a civil lawsuit against Ronaldo alleging that he raped her in a Las Vegas penthouse suite nine years ago, is still in “active therapy” to deal with the emotional impact of the assault, according to her lawyer, but she has been “given a lot of courage” by the #MeToo movement that has helped her speak out.

“Her decision to pursue this matter is important,” Leslie Stovall, the attorney, said during a news conference on Wednesday, “because she is now advocating for herself.

“She wants justice, of course,” Stovall said, when asked what Mayorga wants out of this legal action. “She would want to not be the person who has had to live with this for the last eight or nine years.”

Ronaldo has denied the allegations, starting in 2017 when his lawyers dismissed a story from German outlet Der Spiegel, that first reported on the alleged incident (without identifying Mayorga by name). Der Spiegel’s report was largely informed by documents it obtained from Football Leaks, an anonymous group similar to WikiLeaks that uncovers and releases private or sensitive documents related to the international soccer world.

This week, when attention on the case resurfaced following Der Spiegel’s publication of another story that included an on-the-record interview with Mayorga, Ronaldo first issued a vague denial in an Instagram Live post — referencing “fake news” and saying that people want to “be famous” by leveraging his celebrity — before he issued a statement on Twitter in which he refuted Mayorga’s allegations.

“I firmly deny the accusations being issued against me,” Ronaldo said. “Rape is an abominable crime that goes against everything that I am and believe in.”

“Keen as I may be to clear my name, I refuse to feed the media spectacle created by people seeking to promote themselves at my expense. My clear conscious [sic] will thereby allow me to await with tranquility the results of any and all investigations.”

Suffering from debilitating emotional distress, the lawsuit claims, Mayorga ultimately signed a $375,000 settlement agreement that essentially required she never speak of any interactions she may have had with Ronaldo. Her current lawyers, who were not involved in that settlement, now say the agreement should be voided.

“I found no explanation for the metropolitan police department’s failure to continue that investigation,” he said. “I don’t know why, but I’m curious to find out.”

Referencing the possibility of a monetary settlement, Stovall said, “In our legal system, you can’t give her back what she’s lost. I wish we could. I wish we could say, ‘What occurred on June 13, 2009, did not occur.’

“Unfortunately, we’re not able to do that.”

Stovall added that Mayorga has been diagnosed with post-traumatic stress disorder as a result of the alleged incident, and has suffered from depression — including suicidal thoughts — in the years since. He said she is choosing to avoid commenting more on the case at this time because of her “emotional state.”

Getting the previous agreement voided is the biggest challenge facing Mayorga and her legal team as it relates to advancing the current case. For Ronaldo, however, the most serious component of the situation is the decision of Las Vegas police to reopen its investigation into the incident.

The police will use information provided by Mayorga (and Der Spiegel) in the investigation, and while the likelihood of a criminal charge is decreased because of the length of time since the alleged incident occurred, Ronaldo, if charged, could be extradited to the United States to face a trial.

Nevada law recently changed its statute of limitations on sexual assault charges to 20 years, and those convicted of sexual assault in the state face a possible life sentence in prison.

Stovall said that he and his associates had already shared with the Las Vegas police several relevant documents obtained from Football Leaks, including written questions and answers that are attributed to Ronaldo in which he acknowledges having a sexual encounter with Mayorga and, in one version of the document, admits Mayorga said “no” and “stop” several times.

In an email to ESPN, a spokeswoman for Ronaldo’s sports agent, Jorge Mendes, declined to comment on whether Ronaldo has received official notification of Mayorga’s lawsuit.

When he does, Ronaldo will see that the lawsuit alleges he or people working for him are guilty of 11 counts, including conspiracy, defamation, abusing a vulnerable person, battery, infliction of emotional distress, coercion and fraud, racketeering and conspiracy, breach of contract, abuse of process and negligence for allowing details of the confidential settlement to become public. It seeks damages of at least $200,000, which Stovall said is simply a required minimum.

Ronaldo, who has lucrative endorsement agreements with many global brands, will have 20 days to respond to the lawsuit once he is officially served, Stovall said. On Wednesday, one of Ronaldo’s business partners, EA Sports, which has Ronaldo on the cover of the latest edition of its popular FIFA soccer video game, released a statement that said the company has “seen the concerning report” detailing the allegations and would monitor the case going forward.