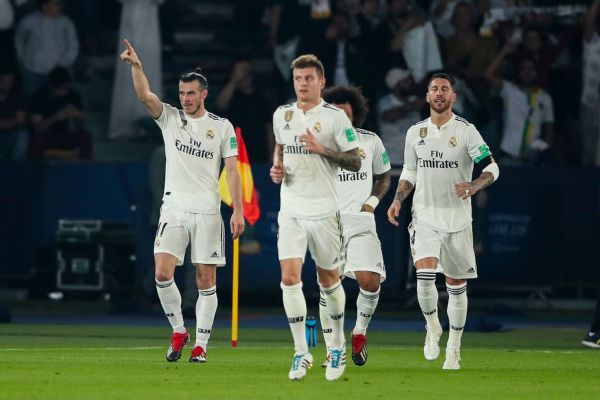 Bale had been a doubt ahead of kickoff for the three-time defending European champions with an ankle injury, but was passed fit and opened the scoring just before half-time. The Wales international combined with Marcelo and fired a low shot beyond Antlers goalkeeper Sun-Taw Kwoun.

The goal capped an opening period that began with an opportunity for the J1 League side, who qualified to the tournament as the Asian champions. Striker Serginho went close with a left-footed shot that Madrid goalkeeper Thibaut Courtois pushed wide.

Bale scored his other goals within a two-minute span after the break at Abu Dhabi’s Sheikh Zayed Stadium. Bale jumped on Shuto Yamamoto’s errant back-pass to in the 53th minute to knock in his second into an unguarded net, and then tallied the third on a shot from outside the penalty box into the top corner.

The La Liga side let off the pressure and subbed Bale for Marco Asensio in the 60th minute, who subsequently gave way 15 minutes later to Casemiro after an apparent injury.

Bale joined Luis Suarez and Cristiano Ronaldo as the others to score a hat trick in the current Club World Cup format.

Madrid will go for their third straight title and fourth overall on Saturday, when they play host side Al Ain in the competition’s final. Kashima will play South American champions River Plate in the consolation match.