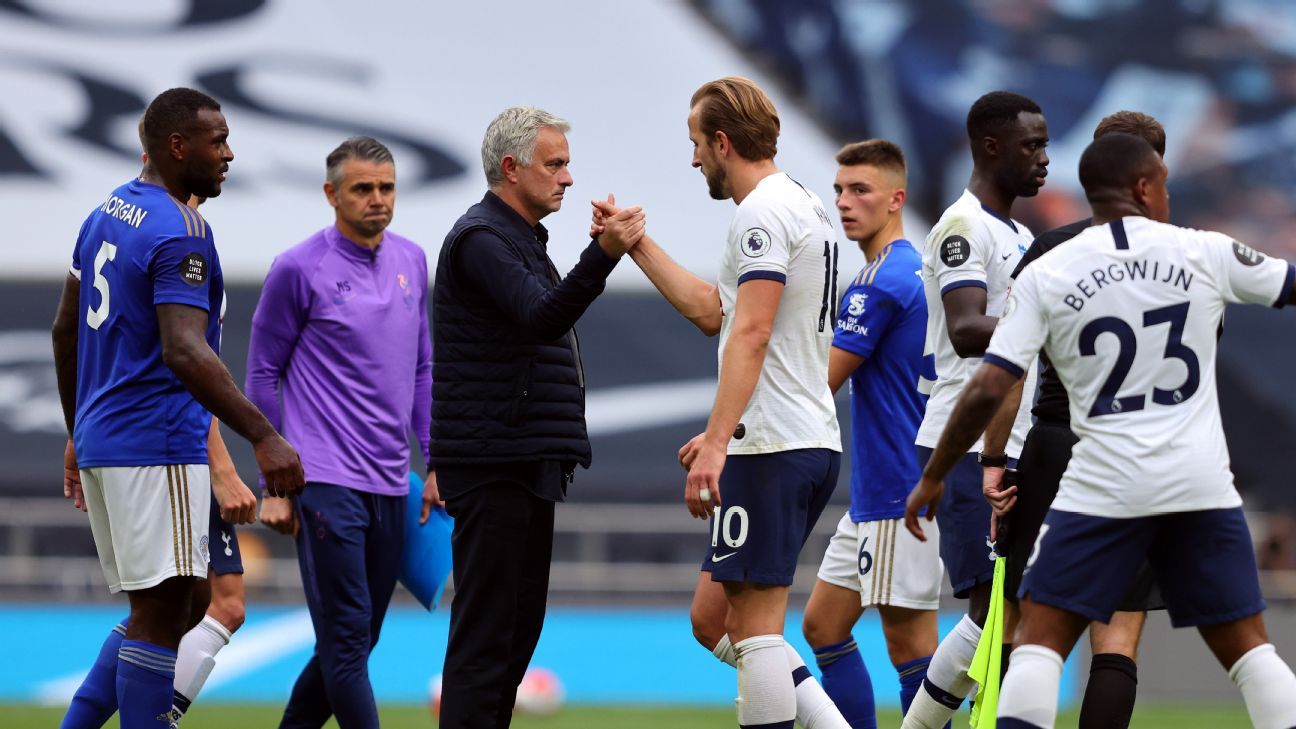 
LONDON — Harry Kane might end up scoring 200 goals for Tottenham under Jose Mourinho, or maybe 50 or even “186.” The Portuguese manager, who last month in a news conference rattled off the goalscoring statistics of all his former strikers, might even write the wrong numbers down again! For now though, the England captain is up to 13 since the arrival of the “Special One” after back-to-back braces against Newcastle and Leicester, his 16 goals in all competitions against the Foxes the most he has scored against any opponent. When he gets great service like he he did in a 3-0 win over Leicester, Kane has continually proved he is one of the world’s best.

The 13 goals, after missing 15 games between Jan. 2 and June 19, is a pretty good return, too. Yet, like the rest of his teammates, Kane has had to adapt to a new and very foreign philosophy under Mourinho. It took a few months, a few disappointing results and clarifications. There was the hairdryer treatment after the 3-1 defeat to Sheffield United. There was the terrible series of five losses and a draw in all competitions at the end of February and beginning of March. But Mourinho never lost his focus and his direction.

The idea was to get this team to play a very pragmatic brand of football. What the former Chelsea boss wanted was a resilient team, disciplined, organised and efficient in both boxes. Far from the Mauricio Pochettino philosophy, there would be no more max intensity or high pressing. However, there would be a need to be good and quick in transition and to be intelligent in your movement off the ball. Against Leicester, Spurs showcased once again how lethal they have become on the counter. That’s how they scored all three of their goals, with Kane involved in each. He started the first with a wonderful through ball for Son Heung-min early on and followed that up with two superb finishes in the space of three minutes just before half-time.

The Londoners happily left the ball to the Foxes (71 percent possession) to punish them like they did Newcastle and Everton recently. And there could have been more, with Toby Alderweireld’s long ball towards Son was another example of quick play forward. The overwhelming message from the manager has been to not be concerned with build-up play or taking risks. The best example on this day might have been the fantastic 50-yard, half-volley pass from Lucas Moura for Kane, right after the break in which the striker went one-on-one with Wes Morgan and came close to completing his hat trick. Moura’s and Son’s pace is being used so perfectly by Kane at the moment, with the striker not only scoring but often dropping deeper to create space in behind for the pacy two wingers.

The role of Giovani Lo Celso, who’s been playing as a No. 10 behind Kane but actually does a bit of everything, is key too. The ever-busy Argentine, who can defend and serve as an extra defensive midfielder alongside Moussa Sissoko and Harry Winks, also gives an options between the lines. On Sunday, his average position on the pitch was close to his two teammates.

We are now starting to see the Tottenham Jose Mourinho wants next season, as Harry Kane explained after the game. “This is a different style to Mauricio [Pochettino]. We have had a lot of time to work on it during the break. It was hard for him [Mourinho] to come during the season to put his stamp on it, but we have been able to do it in the last three games. We caught them on the counter. We were explosive when we got the ball back and we were clinical,” the striker said.

This is the Tottenham that Mourinho will set up next season to do better the sixth-place position they currently occupy in the table. When he took over in November, they were 11th and had lost their identity. He has given them a new one. While it is not always pleasing to watch, it is effective. Since the disappointment at Sheffield, Spurs are now unbeaten in five with four wins and one draw.

“The team is being a team. The players are understanding better the principles of what we want to do. I think it is a good step. To come midseason is always complicated, but I didn’t know it would be so complicated with loads of injuries, but it helped me to prepare for next season. And when we start the preseason for next season, we will be a step higher,” Mourinho said after the game.

With Sunday’s victory, Mourinho is helping his two former clubs Chelsea and Manchester United in their quest for Champions League football next season, all while pouring more misery on Leicester and his former protege Brendan Rodgers. The Portuguese played a big role in Rodgers’ early career, the Leicester boss spending time as a youth coach and later the reserve team manager under Mourinho at Chelsea between 2004-08. The two shared a lovely embrace before kickoff, but the reunion soon turned into a nightmare for the student and his men. Leicester played well at times — they had 24 shots — but didn’t create enough quality chances despite Hugo Lloris making six saves.

Leicester have now only won two of their past eight Premier League matches and can see Chelsea secure third place on Wednesday with a win at Liverpool and Manchester United leapfrog them into fourth with even a draw against West Ham on the same day. The Foxes still could finish in the top four, courtesy of hosting the Red Devils on the last day of the season, but it should never have gotten to this point. While they clearly overachieved for most of the first half of the season, the absences of James Maddison, Ben Chilwell and Ricardo Pereira have been a huge problem and coincided with the Foxes spectacular collapse. Rodgers has also made mistakes, like his decision to play a back three and start the 36-year-old Morgan here. His players would probably have signed up for Europa League qualification at the start of the season but it will feel like a disappointment if that is the only thing they get next weekend.

Meanwhile, Mourinho and Tottenham are trending up and already looking forward to aiming higher next season.