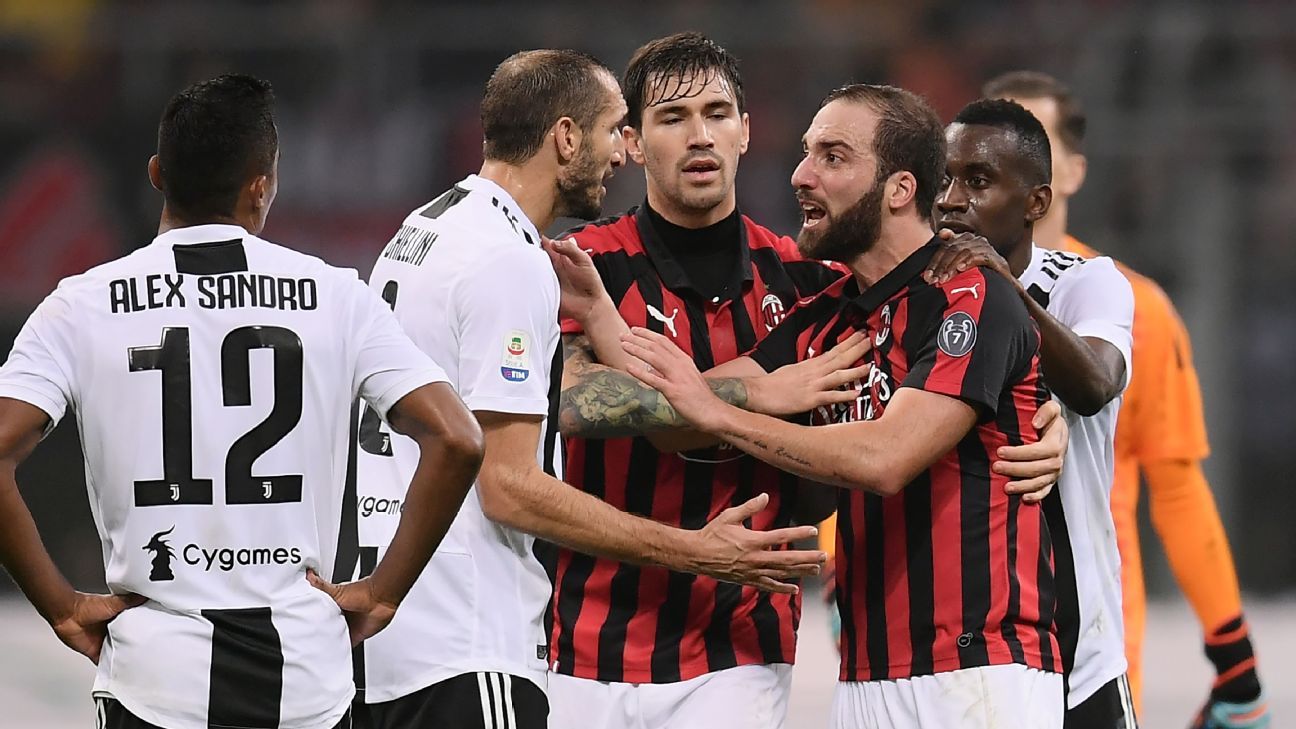 
As the announcer read out the line-ups at San Siro on Sunday, the Milan Ultras whistled Juventus’ starting XI. When he listed off the substitutes, all you could hear was an “ooooooooooh” from the Curva Sud which became louder and louder until climaxing with Leonardo Bonucci’s name and a shout of “S—.”

It was the first time Bonucci had returned to the stadium since ditching Milan in the summer “to go home” to Juventus after only one season. But he was not named in the starting XI. Realising the treatment that lay in store for his centre-back from the home crowd, coach Massimiliano Allegri decided to take him out of the spotlight.

The last time Allegri had left out his star defender, in spring 2017, was as punishment for challenging his authority. Bonucci memorably watched Juventus play Porto in the Champions League at the Dragao perched awkwardly on a stool. Affronted, he left for Milan that summer promising to “shift the balance” of power away from Juventus — comments that were not easily forgiven when he made his way back to Turin, tail between his legs, this summer.

Now reconciled, Allegri’s intention on this occasion was to spare Bonucci from playing in a hostile environment where controlling his emotions would be difficult. “Honestly I was a little surprised to be on the bench,” the 31-year-old said as he walked through the mixed zone before the game. “Those who know me well know that I would never pull out of a game like this. Quite the opposite in fact. These are the games I get most excited about.”

Allegri somehow managed to keep a straight face when repeating that the decision to leave Bonucci out was nothing more than “a matter of rotation.” But he is smart enough to know that this kind of treatment can get under even the thickest skin. As a judgement call it went a long way to defining this match when you consider how Gonzalo Higuain handled his own bittersweet reunion.

Juventus were better than an injury-ravaged Milan without hitting the heights of Udine, Valencia and Manchester, and ran out 2-0 winners. The midweek defeat to United — which Allegri said left his players “stunned” more for the manner in which it came about than the result itself — was immediately put behind them. Mario Mandzukic marked his first start in three weeks with a goal after just eight minutes and the sight of him towering over Ricardo Rodriguez at the far post set the tone for the match before Cristiano Ronaldo made it safe with 10 minutes to go.

Juventus outmuscled Milan. The difference in physicality was pronounced, particularly the ease with which Alex Sandro knocked Suso around and the amount of time the lightweight Samu Castillejo spent picking himself off the turf after being run over by a black and white monster truck.

This is what Milan boss Gennaro Gattuso chose to highlight after the game. “We came up against a side that is clearly stronger than us,” he said. “We played a team that has been winning for years… It’s a different level… Juventus are not only the best team in Italy, they’re the best equipped [side] in Europe with [Manchester] City and Barcelona.”

In saying that, Gattuso not only gave an honest reflection of the game but also attempted to shift the attention for the defeat away from Higuain. Dumped out on loan to Milan once Juve had signed Ronaldo this summer, he missed a penalty in the first half, then lost his head in front of his ex and was sent off shortly after Ronaldo’s goal, ranting at players at officials before being dragged off the pitch. In doing so, he made Allegri’s point for him: underlining why managers should perhaps think twice about selecting a player for a game against their former club when the risk of emotions getting the better of them is too high.

Gattuso has warned Higuain repeatedly this season about the need to control himself, usually because he can lose five or 10 minutes in a huff, decrying a teammate for playing the ball behind him or not seeing him in space. But, against the club that “practically kicked me out,” this game was a special case.

“It’s no coincidence that I spoke yesterday about the need for him to stay calm,” Gattuso said. “I could see he was tense.”

Higuain clearly felt like he had a point to prove. The same was true of Juve defender Medhi Benatia who stood in for Bonucci and had the task of shackling El Pipita. The Moroccan had complained last week about a lack of game time and the need to consider his future if the situation didn’t change. He’d also heard pundits talking smack about him and wanted to stick it to them. “Last night I was with Cristiano and Rugani. We were watching Sky and there was this guy saying I always made mistakes in the big games.”

That pundit had looked spot on when Benatia gave a penalty away just before half-time, handling the ball as Higuain pushed it past him. But the Argentine demanded to take it, pulling rank over Franck Kessie for a chance to show Juventus they were wrong to do what they did, and missed.

“As Juventus’ No. 2 last year I always trained with him [Higuain] on penalties,” goalkeeper Wojciech Szczesny said after the game. “We studied him before the game too. I went early, he usually shoots in that corner. I hoped he wouldn’t change his mind and he didn’t.”

As if the penalty miss wasn’t bad enough for Higuain, seeing his successor Ronaldo kill off the game shortly before he was booked for a collision with Benatia sent him over the edge.

Benatia probably should have been shown a second yellow for the penalty incident and when the clash ended up with Higuain going in the book instead, the Argentine flew off the handle, raging at referee Paolo Mazzoleni and leaving the official with no option but to expel him.

The apology Gattuso recommended the striker make will also be entered in his defence but there is no chance he will be back against Lazio when Serie A resumes after the international break, a huge game bearing in mind Milan’s objectives this season.

Gattuso is still a young coach but he was taught a lesson by Allegri this weekend. Bonucci perhaps still doesn’t agree with the decision to give him a rest, but the Juventus coach emerged from it vindicated. More than a tactical triumph, Sunday’s win was about those intangibles that often go overlooked: an appreciation of the moment, man-management and a profound understanding of human nature.