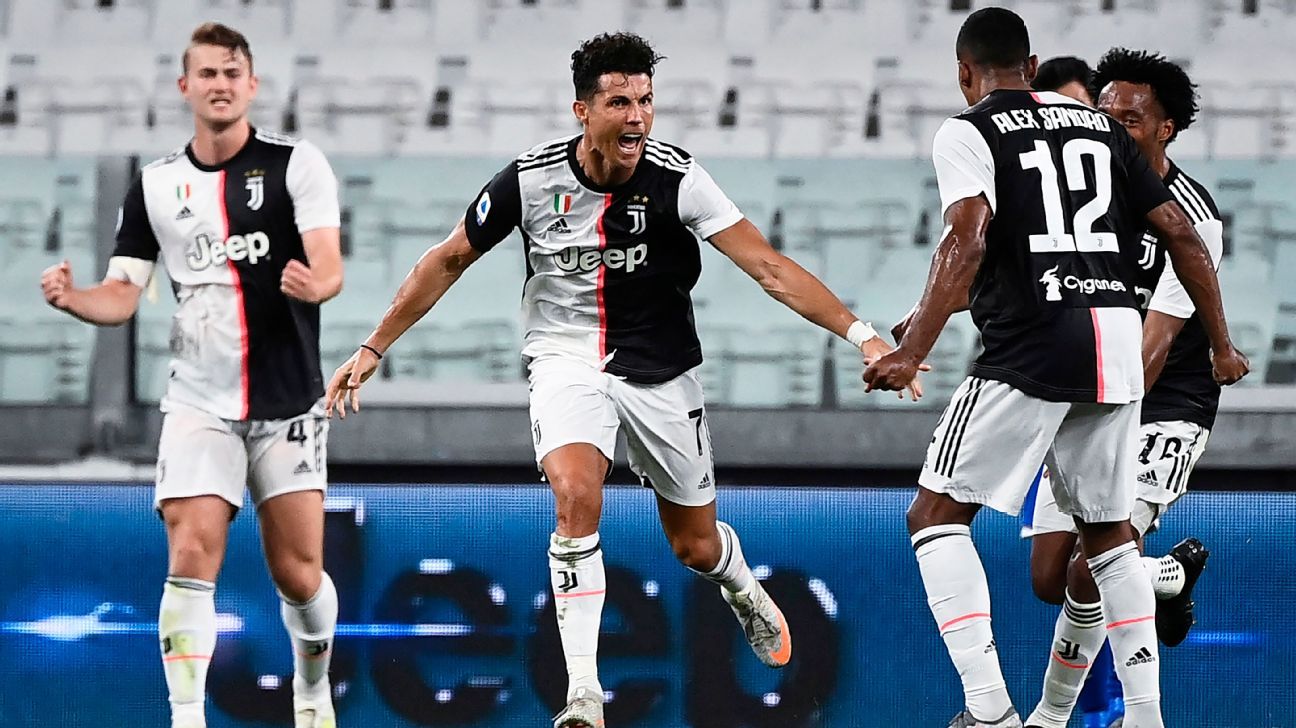 
The 2019-20 Premier League season came to a thrilling conclusion this weekend and Serie A saw Juventus crowned champions for a ninth consecutive season. It’s Monday, so Gab Marcotti reacts to the weekend’s biggest moments.

Ronaldo delivers Serie A for Juventus, but what’s next for Sarri & Co.?

If football were more like other sports, evaluating Juventus’ decision to commit some €318 million (around $370m) in wages and transfer fees over four seasons to Cristiano Ronaldo would be more straightforward. You figure out to what degree the team has improved, you look at his production, you count the silverware, you factor in any increased revenue and you weigh that against what that cash might have bought you if you’d chosen to spend it differently. Chuck in some fuzzy variables like brand image and prestige, and you’re done. You might not reach a definitive, indisputable answer, but at least you have something to work with.

But this sport — and its economics — don’t quite work that way. The “fuzzy” intangible stuff takes on outsized importance because we live it by moments, and Ronaldo showed late in the first half of Sunday’s title-sealing 2-1 win over Sampdoria just what he brings to the table.

It was late in the first half and the old fox Claudio Ranieri had set his Samp side up to frustrate Juve. They had avoided relegation and had nothing to play for but pride, yet were finishing the season on a high with five wins in seven games. Juve, on the other hand, were hobbling to the finish line with one victory in five and, just as worryingly, a string of sub-par performances. They lost Danilo through injury and then, more importantly, Paulo Dybala, the guy who had been carrying them since the restart. And it was still 0-0…

What did Cristiano do? First, in an effort to catch the opposition off guard and transmit urgency to his teammates — some of whom played as if they were paralyzed by fear of failure — he took a quick throw-in from behind the advertising hoarding, something I don’t think I’ve ever seen before. Then, deep in first-half injury time, he’s on hand to finish Miralem Pjanic‘s set-piece routine. He does it by creating space, deceiving Samp’s defenders into thinking he’ll run toward the goal and then bouncing back out, receiving the square pass and stabbing it home with power and accuracy.

It’s one goal of many that may well be lost, but it sums up the intangible view he brings. How you assess it, and what portion of $370m over four years it adds up to, is a matter of personal choice.

Beyond that, I stand by what I wrote 10 days ago. This is not a well-assembled team for what Maurizio Sarri needs to succeed, which goes some way to explaining why there has been so little progress in these 12 months.

Still, let’s not lose sight of the macro-story or take away from Sarri, writ large. This is a guy who never played professionally and was pushing papers in a bank well into his 40s. And now, at 61, he has become the oldest manager to win the Serie A title. He was also instrumental in restoring Dybala, arguably Juve’s best player since the restart, to the level he was at a few years back. And he retains that self-deprecating sense of humor, telling his players: “If you won with me as coach, you must be really, really good!”

It’s funny, but it also underscores the reality and the dilemma Juve’s top brass face going into the Champions League. Yes, they win because they have much better and better-paid and more expensive players than everybody else. So what does Sarri bring? Would they be better off with someone else? And can he make his mark on this team?

It was nervy, but a Bruno Fernandes penalty and a garbage-time Jesse Lingard (!) strike to defeat Leicester City ensured Manchester United‘s qualification for the Champions League.

There’s a danger in looking at points totals and league finishes as a measure of a club’s progress. If you want to be negative, you can point out that this is their second-lowest points total in 29 years, after the wretched David Moyes campaign. Or that to find the last time they were this many points away from the top of the table you need to go all the way back to 1974-75, when they weren’t even in the top flight. (OK, under the current system of three points for a win, they were further away more recently… in 1978-79, which is still more than four decades ago.)

Or, you can flip it around and point out that this is their second-highest finish since Sir Alex Ferguson retired and they can still win the Europa League this season. Yay.

That’s why it makes sense to look beyond the numbers. And if you can do that, you’ll see that they have a young, prolific front three, along with two outstanding playmakers in midfield. There is renewed confidence in the manager, as well as money in the bank to spend. That’s not a bad place to start. There’s plenty of work to be done, sure, and maybe Ole Gunnar Solskjaer isn’t the guy to deliver long-term. But the progress is evident. And comparing this team to United sides of the past, when the landscape and context were completely different, is just silly.

Milan have committed to Stefano Pioli and their post-restart resurgence sees them deep in a Europa League race that once seemed improbable, but there’s no rest for the Rossoneri. Why? Because there are two huge contract issues to sort out.

Gigio Donnarumma‘s deal expires in June 2021, while Zlatan Ibrahimovic is out of contract at the end of the season. Both are represented by the same guy, Mino Raiola, and the super-agent isn’t one to offer bulk discounts. Over the weekend, the pair flew to Raiola’s base in Monaco to strategize.

Italian media are bullish on the fact that both will extend their deals, and it’s pretty critical that the club get this right. They have very little leverage over Donnarumma, who already has a monster deal worth nearly $12m a season, making him the third-highest-paid keeper in the world. That contract, extended by the previous owners, was a colossal screw-up because, as good as Donnarumma is, he’s evidently overpaid. Still, he knows that in 10 months’ time he can leave as a free agent and, at that point, he can get an even more monstrous contract since there will be no fee to pay. Equally, Milan can’t sell him now, with a year left, because very few clubs can afford his salary and they’d get very little money because of his expiring deal.

It looks like the best the club can hope for is a multiyear extension at the same wages, with the addition of a manageable release clause (maybe €50 million?). Not a great situation at all.

With Ibrahimovic, I’d take a much tougher stance. Remind him that he turns 39 in October, that he likes living in Milan, that the club and fans adore him and that he has already made a ton of money. The clock is ticking — does he really want to disrupt his family and life to go somewhere else for a few euros more? Get him to take a pay cut, make up for it with bonuses and see what happens. And, if necessary, be prepared to walk away.

It’s too early to judge Mourinho at Spurs, Arteta at Arsenal

Steve Nicol lays into Jose Mourinho and Tottenham for celebrating after Spurs qualified for the Europa League.

There’s a school of thought out there that loves to play the compare-and-contrast game between Jose Mourinho and Mikel Arteta. Mourinho took over a Tottenham side in 14th place and, with the 1-1 draw against Crystal Palace this past weekend, finished sixth and qualified for the Europa League. Arteta took over 10th-place Arsenal and got them up to eighth. So why doesn’t Mourinho get the same love from fans and media alike?

The answer is simple and Mourinho himself laid it out months ago, when things weren’t going so well. He asked to be judged on next season, which is the right thing to do. And the same applies to Arteta, by the way. Mourinho’s Tottenham took 21 of a possible 30 points since the restart, in no small part thanks to the return of Harry Kane and Son Heung-Min. Without the shutdown, it might not have happened, but it would still have been the very same Mourinho.

The fact is that Spurs, like Arsenal, are works in progress. These are two clubs that are rebuilding in their own way, one with a highly-decorated veteran manager with a 20-year career, the other with a guy who has coached 20-odd games. Wait until next season before you draw your definitive conclusions.

How much is a Premier League place worth?

The excellent Swiss Ramble blog worked out how much a Premier League place higher or lower is worth in economic terms and, taking into account the new television deal and the COVID-19 rebate, put the figure at around £2.7 million ($3.5m). (It will be a bit more for some clubs and a bit less for others as the rebate doesn’t hit everyone equally.)

That’s a fair chunk of cash. And given some players’ propensity to check out mentally once the seasonal objective has been achieved — “on the beach” is the term some use — you wonder whether some clubs might start using it as a carrot. For example, Crystal Palace were ninth after their 2-0 win at Bournemouth in their first game back after the shutdown. With no risk of relegation and no realistic chance of qualifying for Europe, they then proceeded to lose seven of their last eight games to finish 14th. That’s some £13.5m ($17.4m) that went up in smoke.

What might have happened if the club had announced it was willing to share some of that potential extra revenue?

De Bruyne’s stats tell us what we already know

Kevin De Bruyne equalled Thierry Henry‘s assist record in Manchester City‘s 5-0 sign-off against Norwich. I think it’s a bit of a hokey stat because it depends so much on style of play and teammates, but there is no question that he’s one of the very best passers football has seen in a long time.

Does it help that he has teammates who can finish and make the right runs at the right time and that he plays alongside equally gifted passers, which often stops opponents from keying in on him? Of course it does. It helps tremendously. But De Bruyne’s vision and ability to execute that vision borders on the supernatural. You don’t need assist numbers to tell you that.

Credit Conte for seeing the best in Lukaku

Romelu Lukaku scored twice in Inter’s 3-0 pasting of Genoa on Saturday night, which means they have a one-point lead over Lazio and Atalanta in the race for second place in Serie A. Antonio Conte, playing the Antonio Conte character, says second only means you’re the first of the losers, and you can tell he’s bitter about the points Inter have squandered along the way. That said, the work he’s done wth Lukaku this season has been spectacular.

Most managers Lukaku has worked with (with a few exceptions) saw him only as either a hulking target man or as counterattacking, front-to-goal lone striker. Playing in a front two this year, the Belgian striker has shown there’s an entirely different dimension to his game and that he can be a top-drawer provider as a passer as well as a Thomas Mueller-esque space creator. He’s one of the cleverest strikers out there and Conte has unleashed his mind and reading of the game like no manager before him.