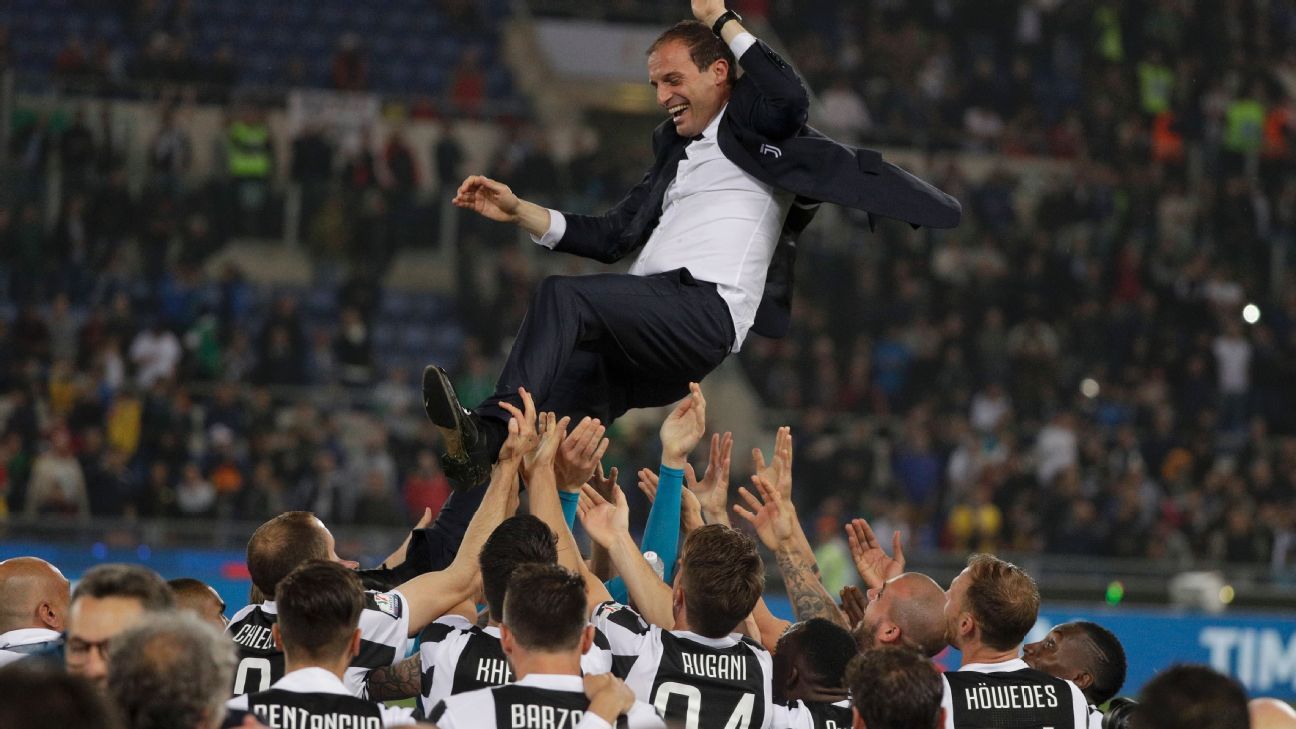 
Juventus boss Massimiliano Allegri walked out of his postgame television interview in anger despite his side’s 4-0 victory over AC Milan in the Coppa Italia final on Wednesday.

Allegri watched his side pull away with four second-half goals to win the trophy for the fourth straight season, while they can also win a seventh straight Scudetto by securing the Serie A title this weekend.

But the night ended on a sour note after Allegri was asked by Rai Sport if this could be the end of an era with goalkeeper Gianluigi Buffon likely to retire, Stephan Lichtsteiner set to depart and others like Giorgio Chiellini and Claudio Marchisio also on the wrong side of 30.

“You have to look at the positives. At times we get stuck in these conversations, but football is very simple, you have to deal with the various moments of the season,” Allegri said, after having already acknowledged that “people take our victories for granted.”

“You always talk about tactics, but you should make it clear to young coaches that football is also practice and not just theory. I grew up with Giovanni Galeone as my coach. There are those who explain football and those who talk about football.

“A team that wins seven titles in a row has no issues. Football is like Monopoly, you don’t know what card you’re going to draw. I have a completely different view of football to you.”

And after a pundit said Allegri appeared “tired,” the coach ended the interview by saying: “Unlike you, I am clear-headed. I have plenty of patience and I’ll wait for you all at the finish line.”

After a goalless first half, the game became one-sided after Milan goalkeeper Gianluigi Donnarumma spilled two shots that allowed Juventus to take control.

The 19-year-old has been continuously linked with a move away from Milan, who have always fought the keep him, but coach Gennaro Gattuso suggested the goalkeeper’s future was not so certain.

“At this moment Donnarumma is the Milan goalkeeper, the rest is down to the club,” Gattuso told Rai Sport. “I am the coach, all I do is train the players who are put at my disposal. As far as I am concerned, Donnarumma is one of the most important goalkeepers in the world. It’s up to the club to decide what to do next.”

Gattuso, in his first season in charge of Milan after taking over in November, also took some of the blame for the result, though he also said “the result does not reflect the performance” of his team.

“We have to accept it and realise we made our own errors and must accept them,” the 40-year-old said. “I too am a young coach, I am learning, I make mistakes and have to figure out where we have gone wrong to improve. We shouldn’t look at the 4-0 result, but rather how we lost it and what we can do to improve.”