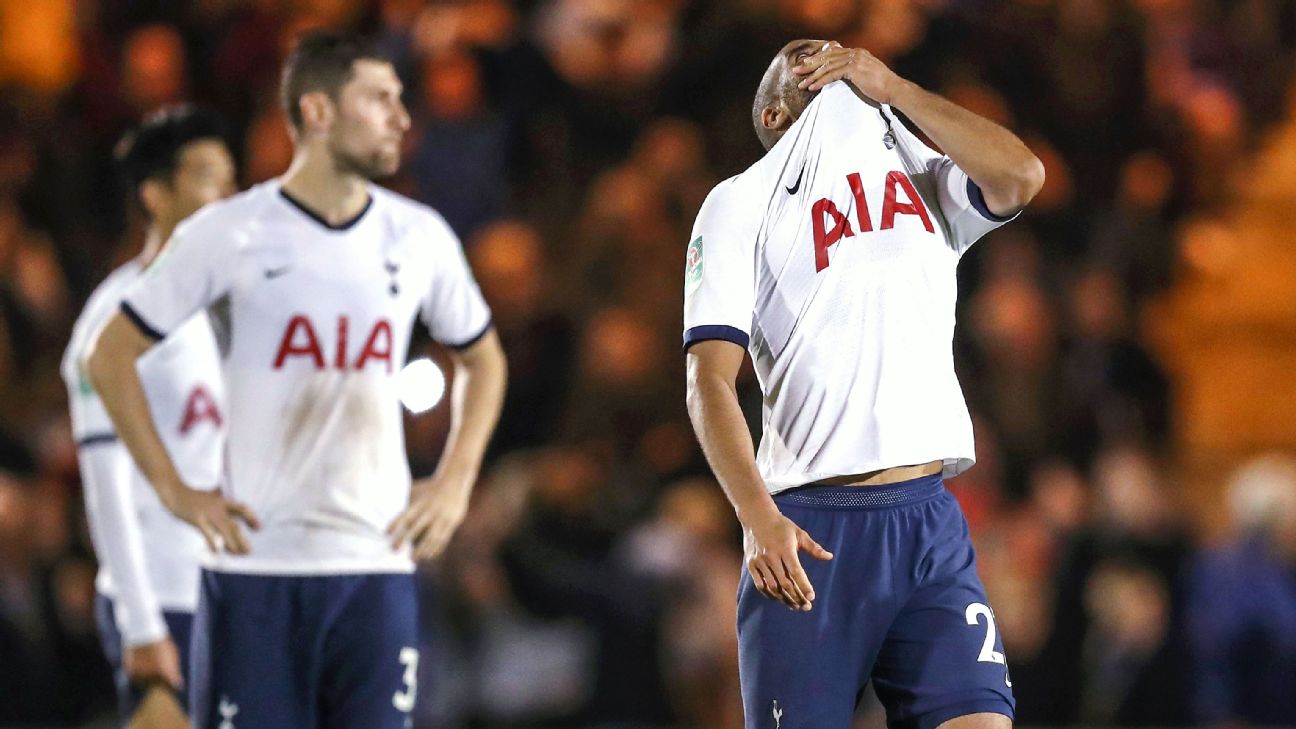 
All you need to know about this weekend’s Premier League action, all in one place.

Just how bad are Tottenham?

It was instructive to hear Mauricio Pochettino’s response to Tottenham’s defeat at Colchester in the Carabao Cup this week. His postmatch comments basically waved a broad hand of blame at these unnamed malcontents in the squad and the club’s failure to buy more players in the summer, as if the reason his side lost to the team 10th in League Two was because Christian Eriksen fancies a move to Real Madrid or they didn’t get the Paulo Dybala move over the line, rather than anything to do with him.

Pochettino may have a point in the wider scheme of things, but the result on Tuesday and their general performances throughout the season have been so devoid of inspiration and direction that it’s impossible to think there aren’t deeper problems at Spurs. Like water collecting on a flat roof for months before eventually the ceiling falls in, Tottenham allowing their squad to go stale could ultimately manifest itself in a spectacular collapse this season, unless they really turn things around. That needs to start at Southampton on Saturday.

Will Liverpool use some sensible rotation?

Liverpool are currently in the middle of a run in which they play seven games in 21 days. Then it’s the international break, which is fine in theory, but most if not all of their players will then embark on long trips with their countries. After that, it’s another seven in 21 days before the next international break, then we’re into late November and before you know it, the madness of the Christmas schedule.

Liverpool have a good enough squad now that Jurgen Klopp can afford to rotate a little, to give his most overworked stars a bit of rest, but he will have to choose the times to do that judiciously. So will he regard a trip to Sheffield United — a newly-promoted side but one who have proved ticklish to say the least so far this season — as a time to do that, or does he play it safe and use the big guns, in the knowledge that there might not be another good time to rest them on the horizon?

Will the return of some first-choice defenders boost Arsenal?

Not many reliable conclusions can be drawn from Arsenal flexing aside Nottingham Forest on Tuesday, given the performance of their Championship opponents. But one plus from the game was the return to fitness of Kieran Tierney and Hector Bellerin, the latter of whom set up a goal within a minute of coming on as a substitute.

Admittedly, neither man can do much to solve the chronic issues the Gunners have in the centre of defence, but Arsenal can only benefit from the addition of what could potentially be the best full-back pairing in the division outside of Liverpool. Against a fragile Manchester United, even that could be enough.

THE GAME YOU’RE NOT PLANNING TO WATCH … BUT SHOULD

If you’ve got room on your DVR or in your busy schedule for one match this weekend away from the title race, we’ve got you covered.

Broadly speaking the reason we watch Premier League football is to see good quality play, to witness the sides at the top of their games display their skills. But sometimes you also want to see a couple of desperate sides scrapping away for whatever they can get, and that’s what you’ll find at Molineux Stadium on Saturday afternoon. The last two sides without a victory meet to see who can clamber out of this spiral of incompetence, with the very real possibility that whoever loses will graduate from “poor start” to “actual relegation battle.”

A TEAM THAT NEEDS A BIT OF LUCK

Luck is everything in sports. Get acquainted with ESPN’s Luck Index as we pick out the team most desperate for good fortune amid a difficult run. Here are the big takeaways from the 2019 edition as explained by Gab Marcotti.

Everton: It wasn’t so long ago that Everton watchers were purring after their side beat Wolves, but two avoidable defeats in their last two games have awoken discontent in the Goodison Park stands. Questions are inevitably being posed about Marco Silva’s tenure, about his selection and balance of his team, so they could really do with a straightforward game to get their heads right. No such luck: Manchester City are in town Saturday, fresh from sticking eight past Watford last weekend. If Everton get a bit of luck, maybe they can sneak a result against City. … But they will need that luck.

Kieran Darcy has some tips for the weekend action. Read his full preview here and set your team line-up!

Last week Aguero became the first player to score in each of the opening six games of a Premier League season. He notched only one of Manchester City’s goals in their 8-0 thrashing of Watford, but he deserved more, hitting the woodwork twice.

Wolves are 19th in the table, but they host the only team below them in Watford on Saturday. Raul Jimenez has just two goals so far this season, but had 13 (and seven assists) last year and could break out this week.

Silva was promoted from Tier 2 to Tier 1 following his hat trick against Watford, but he only scored seven goals in 36 appearances last season. There are much better options in this tier, including teammates Raheem Sterling and Kevin De Bruyne, and Liverpool’s Mohamed Salah.

Manchester United’s defence will get a chasing from Arsenal

Despite spending north of £130 million on defenders this summer, Manchester United’s backline has hardly been watertight. Even a 16-year-old from Rochdale got the better of them in midweek, and while the personnel will be very different for the visit of Arsenal on Monday, you can be sure that they will be in for a difficult night against whoever plays in attack for Arsenal. Alexandre Lacazette won’t be around, but Pierre-Emerick Aubameyang and Nicolas Pepe will provide a handful enough for the likes of Harry Maguire and Victor Lindelof: if United can keep them quiet, that’s half the battle.

STATS OF THE WEEKEND

– Liverpool have a 15-game winning streak in the Premier League, tied for second longest in English top-flight history. Only Man City has a longer streak, having won 18 in a row in 2017. The Champions League holders have outscored opponents 42-13 during the streak and last dropped points in the league on March 3 vs Everton.

– Chelsea have won all eight of their league meetings against Brighton. A win on Saturday would set the English record for the most wins against an opponent without a loss or draw since the Football League began in 1888.

– Tottenham have won seven of their last eight Premier League home matches against Southampton, losing the other 2-1 in May 2016. Meanwhile, Southampton are looking to win three consecutive away road matches in the top flight for the first time since February 2015, when they won four in a row.

Christian Pulisic: Admittedly, Frank Lampard was not involved in Chelsea’s decision to buy Christian Pulisic in January. It’s nevertheless slightly odd that the £58 million signing has only thus far made three starts under Lampard, especially when you would think this is a team that needs all the inspiration it can get. Pulisic stayed on the bench against Liverpool last weekend and started in their 7-1 thrashing of Grimsby Town. But he could play against Brighton on Saturday, and with Callum Hudson-Odoi returning to fitness with a fat new contract in his back pocket, might this be Pulisic’s last big chance for a while to make his case for more regular selection?

Sheffield United 1-3 Liverpool: The Reds train should keep on rolling
Tottenham 2-2 Southampton: This draw will feel like a loss to Spurs
Wolves 1-2 Watford: Hornets will be buzzing after shipping eight to City
Aston Villa 1-0 Burnley: Villa will climb out of the relegation zone
Bournemouth 1-2 West Ham: In-form Hammers will continue to rise
Chelsea 3-2 Brighton: Elusive clean sheets continue for the Blues
Crystal Palace 2-1 Norwich City: The Man City win seems a long time ago
Everton 1-4 Manchester City: The holders will pile on the Toffees woes
Leicester 3-1 Newcastle: No shock to see the Foxes stay in top four
Manchester United 1-3 Arsenal: Further proof of United’s poor form