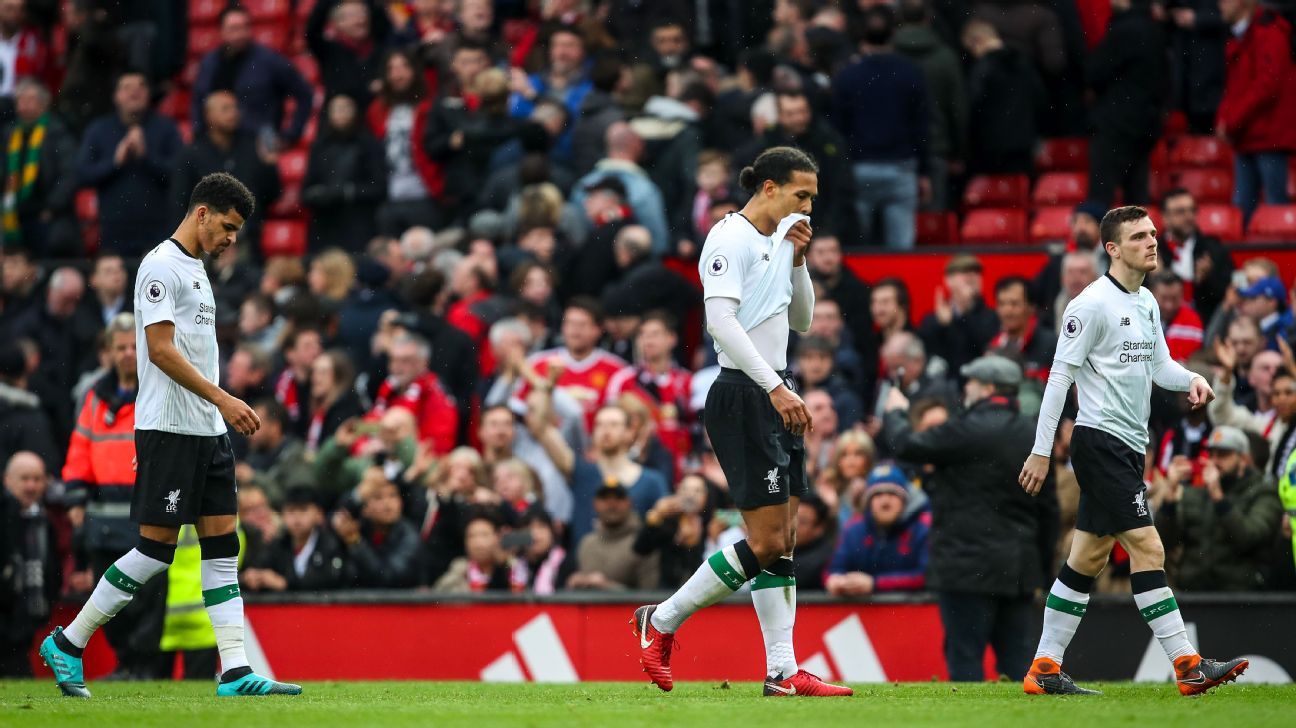 
The only surprise coming from Liverpool’s 2-1 defeat at Manchester United was that anybody at all was surprised by the result.

They’ve beaten United twice at Old Trafford in 14 years. Before a brief bout of success under Gerard Houllier, there’d only been two other wins in the 23 years before him. That’s not great.

There was lots of confidence before the fixture, due to Liverpool’s good form, allied to a curious belief that things weren’t going quite so well for United.

Afterward Jurgen Klopp felt his side deserved something from the game, presumably based on possession stats skewed in the visitors’ favour. This glossed over the fact United could have been 3-0 up at half-time if Juan Mata hadn’t showboated with a gilt-edged opportunity.

Even that might not have altered perceptions, with Klopp as the football lover and Jose Mourinho the arch pragmatist, willing to do anything to win.

This isn’t to insinuate that Reds fans haven’t loved what they’ve been watching lately but with it appears to include a sneering element of football puritanism that’s forgetful of how Liverpool won things in previous decades, one as recently as the 2000s.

It’s reminiscent of what happened at Arsenal. Under George Graham their fans would happily sing “1-0 to the Arsenal,” revelling in the regimented meanness of their defence.

Arsene Wenger had only been manager a few years before fans suddenly started shouting a sarcastic “Hoof!” whenever opposition defenders committed the same safety-first clearances they’d cheered to the rafters when Tony Adams made them.

Liverpool supporters aren’t admirers of Arsenal in general, putting it mildly, so it would be a shame if they were suddenly guilty of the same hypocrisy.

Until such time as football starts to award points for artistic impression, Liverpool have to abide by the same rules as everybody else.

That means at least attempting to reduce the number of goals they concede and the Reds look likely to let in more than one goal per game for the eighth league season in a row.

Until now their main problem was holding onto leads in the closing stages of games. It had cleared up a little after the world-record signing of Virgil van Dijk but on Saturday’s evidence it’s clear much work is still needed.

The side selected was as positive a team as Klopp could’ve chosen; in itself an indication that there wasn’t total respect for the opposition.

Joe Gomez might not have Trent Alexander-Arnold’s speed and flair for attack but it’s likely his defensive positioning would have been better for both Marcus Rashford’s goals.

As all Klopp’s in-form players showed a remarkable timidity in such a big game, there seemed little else there until United relinquished possession entirely to protect what they had.

Houllier’s record at Old Trafford was a remarkable three wins and one defeat in five years. Apart from the goals you’d need an eidetic memory to recall anything else that happened in the games.

That mattered little to Liverpool fans who revelled in each win against their arch rivals. Eventually they tired of Houllier’s full-on pragmatism and longed for more exciting football.

People laugh at superstitious fans. Just because a ground has been a poor hunting ground in the past doesn’t necessarily mean it always will be.

That aside, there didn’t seem enough preparedness for facing the team above Liverpool in the table, that won two trophies last season, could possibly win two more this season and has a manager with a track record of success stretching back to Porto 15 years ago.

Nobody would be stupid enough to want a return to Houllier’s style. It was largely tolerated when it delivered trophies but became extremely tedious when failure crept in.

It stands to reason some balance is needed, often within the same match. Were there times — Liverpool beating Arsenal by two goals, Sevilla by three — when fans wished they followed NFL and could swap their gifted attacking XI for another group of dour, pragmatic grafters impossible to break down?

If there’s been one criticism of Klopp’s reign it is that. It would be nice to know he at least had such a dogged rear-guard action in his locker, not for permanent use but whenever necessary.

Old Trafford hinted at what might happen during the rest of the campaign. Liverpool had an exceptional record against the best teams last season but it’s almost as if they’ve been “found out” now.

Having conceded 20 goals to other sides in the top six plus another five to Sevilla — the best team they’ve faced in Europe — it’s clear where Liverpool need to improve most next season.

What’s not clear is whether the will to make such improvements is there. Just spending £75 million on one defender won’t be nearly enough.