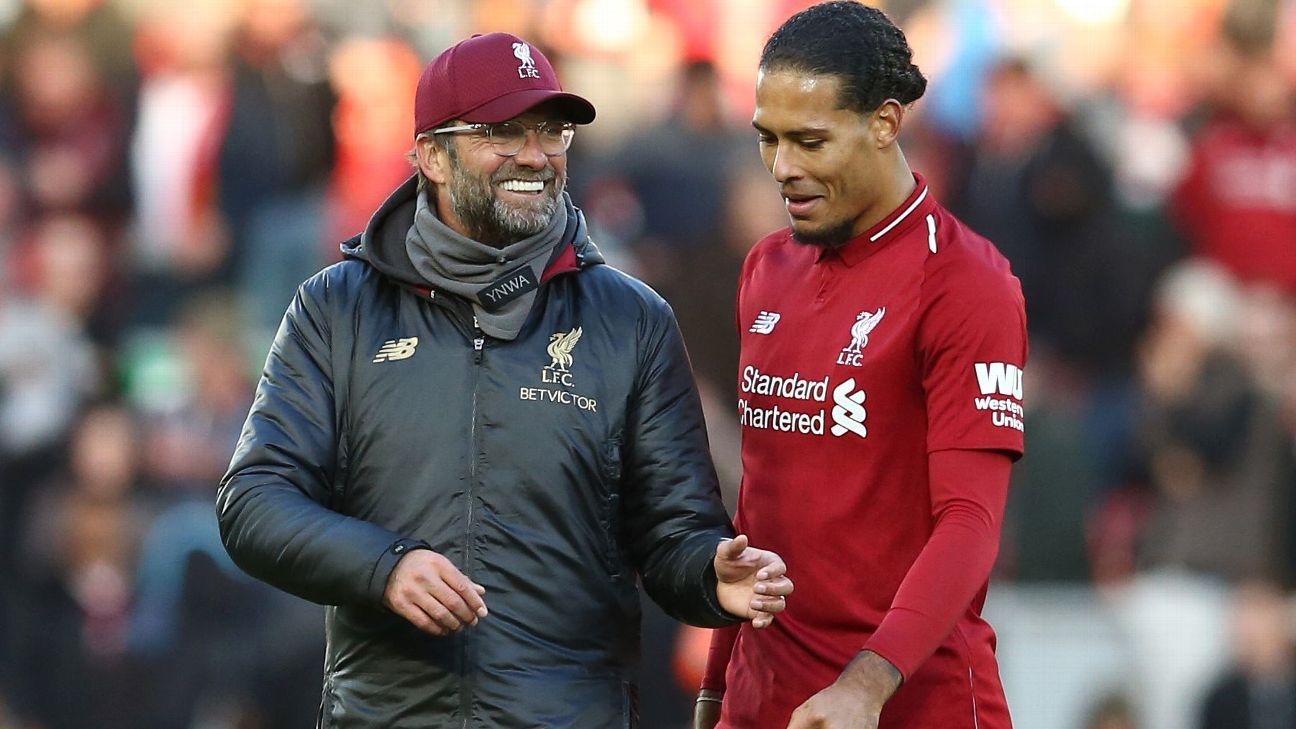 
LIVERPOOL, England — Jurgen Klopp played down the significance of Liverpool moving top of the Premier League after Saturday’s 4-1 win over Cardiff City, but stressed the importance of keeping pace with their title rivals.

Liverpool, who were the only top-five side to play on Saturday, breezed past Cardiff as Sadio Mane scored twice at Anfield and was joined on the scoresheet by Mohamed Salah and Xherdan Shaqiri.

“The number of points makes the difference,” Klopp said at his postmatch news conference.

“Because the difference between 23 and 26 feels like 20 points, pretty much.

“It’s really important to stay on track. We will all meet each other, it’s unbelievable that five or six clubs have such a big number of points but it only makes it even more intense. It’s good for the people and the supporters of different clubs.

“Today it was clear that if we win it would be like that. We won, but for us it’s just the next step. That’s cool. Now we have time to recover. [It’s the] first time for a lot of the boys that they don’t play in three days’ time.

“We will use the time to recover then prepare the Arsenal game, which will be another nice challenge.”

Shaqiri did not start the match on Saturday, despite encouraging performances in the recent wins over Huddersfield Town and Red Star Belgrade.

However, the Swiss international came off the bench just after the hour mark and ended up finding the back of six minutes from time with a clinical finish.

“He played four games, nearly 90 minutes in a row now,” Klopp said. “Both international games for Switzerland, then Huddersfield and Belgrade for us. It was clear.

“We don’t know Shaq long enough to know how he reacts. Sometimes you have to protect players until you know them a bit better.

“I thought the lineup we chose today was a good one. It was good for Adam [Lallana] to start — he was really involved especially in the first half, less in the second, which is completely normal.

“Shaq came in and was involved in two nice goals, which is always good. That made it so hard to leave him out because he was a good player for that game, but we had to think about if it was the right thing to do.

“We decided differently, but football games are 97-98 minutes and you need 14 players for that. OK, today we only had 13 but bringing on that quality is a massive difference.”

Meanwhile, Callum Paterson’s goal for Cardiff saw Liverpool’s run of not conceding at home in the league end at 918 minutes — the second longest spell in the club’s history and 17 minutes shy of setting a new club record.

“We conceded a goal, and that’s not something you want, especially when you can get a record,” Klopp said. “But it’s always possible. And today it helped even a little bit, because now Cardiff thought there was something more, but we were there in those moments and finished the game off.

“I’m really happy about that, and now we can recover and prepare the next game.”