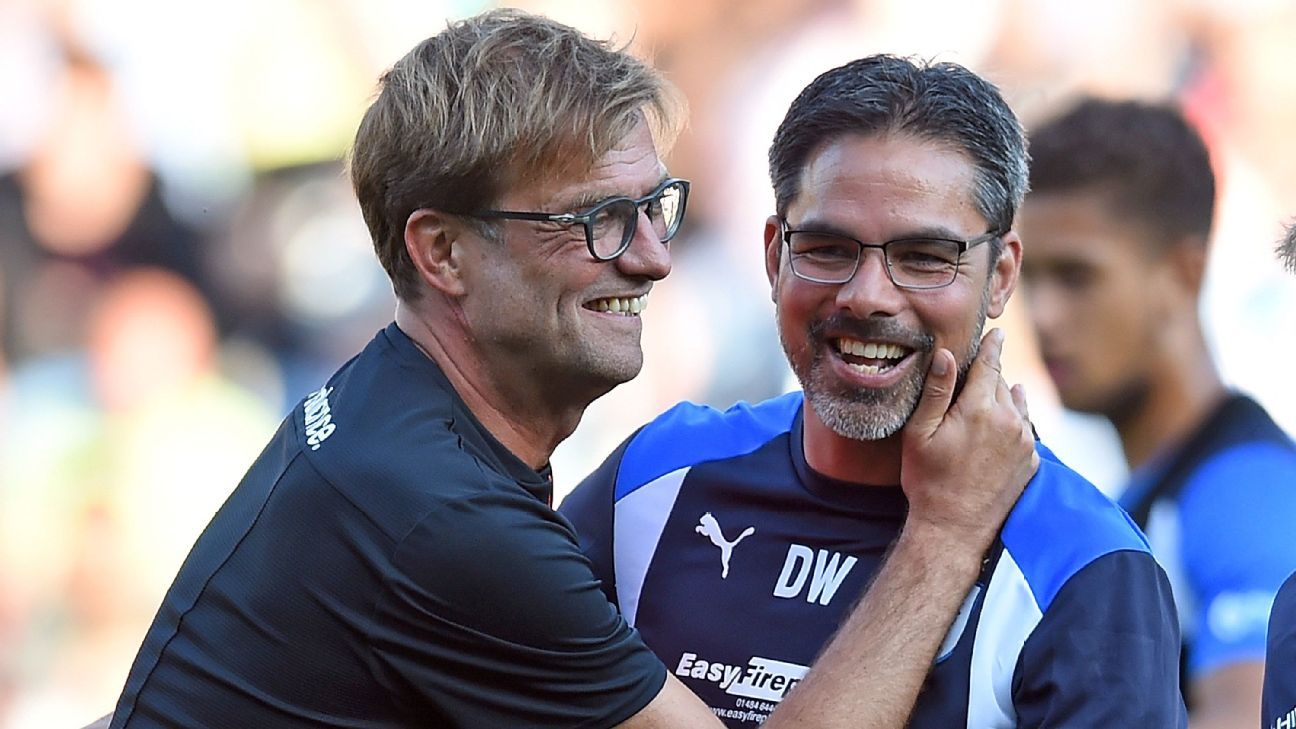 
The garb is the same, the baseball cap-and-glasses combo. The animated antics on the touchline are alike. The coaching philosophies are famously close, based on pressing and high-energy football. The CVs have common denominators, both featuring spells as a player at Mainz and in management at Borussia Dortmund. When Jurgen Klopp and his best man David Wagner meet at Anfield on Saturday, the focus will be on the friendship between the Liverpool and Huddersfield managers.

The personal can be more intriguing than the political, but footballing soulmates have pursued similar policies, ones that many of their Premier League peers have eschewed. They have raided the German transfer market. Klopp signed a goalkeeper from Mainz last season, in Loris Karius. Wagner signed a goalkeeper from Mainz this season, in Jonas Lossl. Klopp has signed two centre-backs from German clubs, in Ragnar Klavan and Joel Matip. Wagner has signed two, in Michael Hefele and Christopher Schindler (plus a third, in Jon Gorenc Stankovic, who had been on loan at Dortmund).

They have drawn upon their specialist knowledge. Many managers do. Jose Mourinho took Portuguese players to Chelsea in his first spell. Dutch managers have a track record of buying Dutch footballers. Rafa Benitez often recruits Spaniards. Yet what is especially pertinent is that Klopp and Wagner targeted an area that was comparatively underexploited by English clubs.

Germany’s highest-profile players were not ignored by Premier League predators. Manchester City, with Pep Guardiola either wanted or appointed, looked at the high end of the German market for Kevin De Bruyne, Ilkay Gundogan and Leroy Sane. Manchester United seemed to target half the Bayern Munich team, especially in Louis van Gaal’s reign, while Mourinho bought Henrikh Mkhitaryan from Dortmund.

Yet, beyond the Bundesliga’s dominant duo, other German clubs may have featured on fewer scouting trips. Liverpool got Matip on a free transfer from Schalke. Klopp convinced from the off that the Cameroon international was worth a small fortune; he appeared bemused that others had overlooked him. Klavan came from Augsburg and while his performances have been mixed, he did excel against both Manchester clubs last season and he cost a mere £4 million.

A comparable centre-back from a mid-table Premier League outfit would have been far more expensive. Klopp, who has also looked at Mahmoud Dahoud, then at Borussia Monchengladbach, and Bayer Leverkusen’s Julian Brandt, probably would like to have bought more from his homeland. When he has tried to do so, he has rarely faced opposition from his Premier League peers.

Further down the pyramid, Huddersfield were able to get promotion while cutting their budget because they knew there were bargains to be found in Bundesliga II. They rationalised that the style of play in Germany tended to equip their players for English football better than those in Spain, France or Italy. Schindler and Hefele only had to get used to more permissive refereeing amid the physicality of the Championship. Once they did, they flourished. Town went up with an £11m wage bill. Their approach was promptly copied by Norwich, hiring Dortmund reserve-team manager Daniel Farke and looking in Germany for talent.

That is what happens. Strategies become fashionable. When a rival hits on a winning formula, or at least a cost-effective one, others look to copy it. Call it marginal gains or a competitive advantage, but it can be swiftly eroded. France offers two examples. Arsene Wenger was the first to plunder Ligue 1. When Arsenal’s competitors did likewise, the finest French talent did not all end up in North London and Wenger stopped being the nonpareil.

Later Newcastle, driven by chief scout Graham Carr, realised that, while domestic clubs could overcharge, there were comparative snips across the English channel. And while results on the field veered from finishing fifth in the Premier League to getting relegated from it, they made sizeable profits on Moussa Sissoko and Yohan Cabaye. But then others adopted the same approach: Leicester took N’Golo Kante and became champions before Ligue 1 clubs upped their prices. The two cases are hardly identical, but Sissoko cost just £1.5m in 2013 whereas Monaco brought in £52m from Manchester City for Benjamin Mendy this summer.

Germany still offers deals that double up as steals. Brighton paid just £2.7m for Pascal Gross, who created the most chances in the Bundesliga last season and has slotted seamlessly into the Premier League. Manager Chris Hughton is altogether less Germanic than Klopp and Wagner but seemed astute enough to borrow from their blueprint.

But there are also signs that their compatriots are wising up to the tactics of the Premier League’s preeminent Germans. They have found cut-price deals in their homeland before, but Klopp ended up offering Leipzig £66m for Naby Keita, a bid that was still refused, though his £48m release clause will be triggered. But it points to potential problems for Klopp and Wagner. They may face greater competition for players they have identified. They may have to pay more. Either way, the German market may not be their secret shop for much longer.