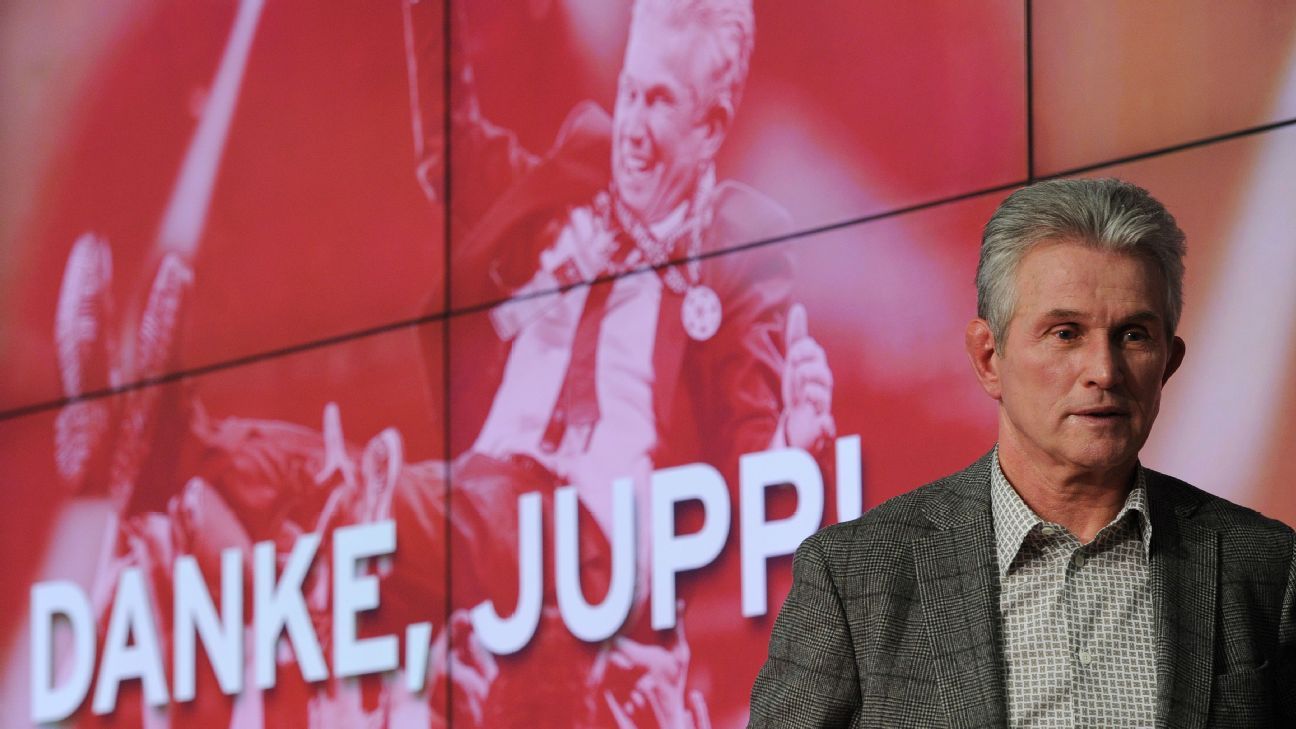 
“The coaching job at Bayern Munich costs a huge amount in terms of resolve, power and energy,” Jupp Heynckes said in 2013 before slipping quietly into retirement after completing an historic treble.

“Over the last few weeks in particular, I’ve sensed that I’ve been at the limit. It was incredibly demanding, incredibly all-encompassing.”

Heynckes, 68 at the time, spoke at length about the heavy wear and tear caused by modern football, explaining his desire to “regenerate” in his family home near the Dutch border with his wife, Iris. Fast-forward four years, and Heynckes, 72, is set to ditch his pipe and slippers to take over as Bayern interim manager until the end of the season.

It will be his fourth spell in charge, racking up two Bundesliga titles between 1987 and 1991 before “Don Jupp” (christened from his time in Spain with Real Madrid, Tenerife and Bilbao) was dumped, Carlo Ancelotti-style, with Bayern enduring an annus horribilis and finishing 10th. Uli Hoeness, then general manager, described his close friend’s sacking as the “biggest mistake” of his career.

Everyone remembers the glorious 2011-13 tenure. However, by the time Heynckes won that famous treble, Bayern had not won any silverware for over two seasons, coinciding with a certain Jurgen Klopp revitalising their only rivals, Borussia Dortmund. Ultimately, Heynckes left his legacy with a treble: the Bundesliga (his third), DFB Pokal and Champions League (No. 2 — he won another at Real Madrid in 1998) at Wembley against Dortmund.

This is his second time trying to get Bayern out of the cart after sacking a manager. He helped Bayern out in a similar predicament in April 2009, when Jurgen Klinsmann was unceremoniously dumped six weeks from the end of season, when Felix Magath’s Wolfsburg ending up winning the Bundesliga.

Louis van Gaal ran the show for much of the next two seasons, with Andreas Jonker acting as interim when the Bayern bosses asked the volatile Dutchman to leave.

Heynckes arrived for his third spell in the summer of 2011, initially memorable for the wrong reasons with three second-place finishes, including a 2012 Champions League final defeat on penalties in their own backyard against Chelsea.

After that heartbreaking defeat on home soil, a depressed, lonely figure traipsed across the pitch after a sudden-death penalty defeat, no doubt wishing for the Munich pitch to swallow him up.

Lesser men (and teams) would have crumbled after that disappointment, and CEO Karl-Heinz Rummenigge waxed lyrically about Heynckes’ “masterplan” to recover from those three bitter second-place finishes of 2012.

News of Pep Guardiola’s appointment in January 2013 seemed to give everyone a lift at the club back then — especially Heynckes. Revitalised after the announcement of the “New Messiah” for that summer, it appeared to give him an extra spark and motivation to banish that unwanted treble nightmare. Ultimately, the haul of three major trophies proved a fitting tribute to the masterplan and a remarkable change in personal fortunes for a grand old statesman of German football.

Bayern will hope for a similar transformation this term after a messy and abrupt end to the Ancelotti era. Heynckes knows captain Manuel Neuer, Jerome Boateng, Thomas Muller, David Alaba, Javi Martinez (his record signing), Franck Ribery, Rafinha and Arjen Robben from his previous tenure. He has the respect of these players, unlike Ancelotti.

Long term, all signs point to Hoffenheim’s Julian Nagelsmann — not even born when Heynckes arrived at Bayern for the first time in 1987 — taking over on a permanent basis at the end of the season, when Jupp dons his pipe and slippers once again.