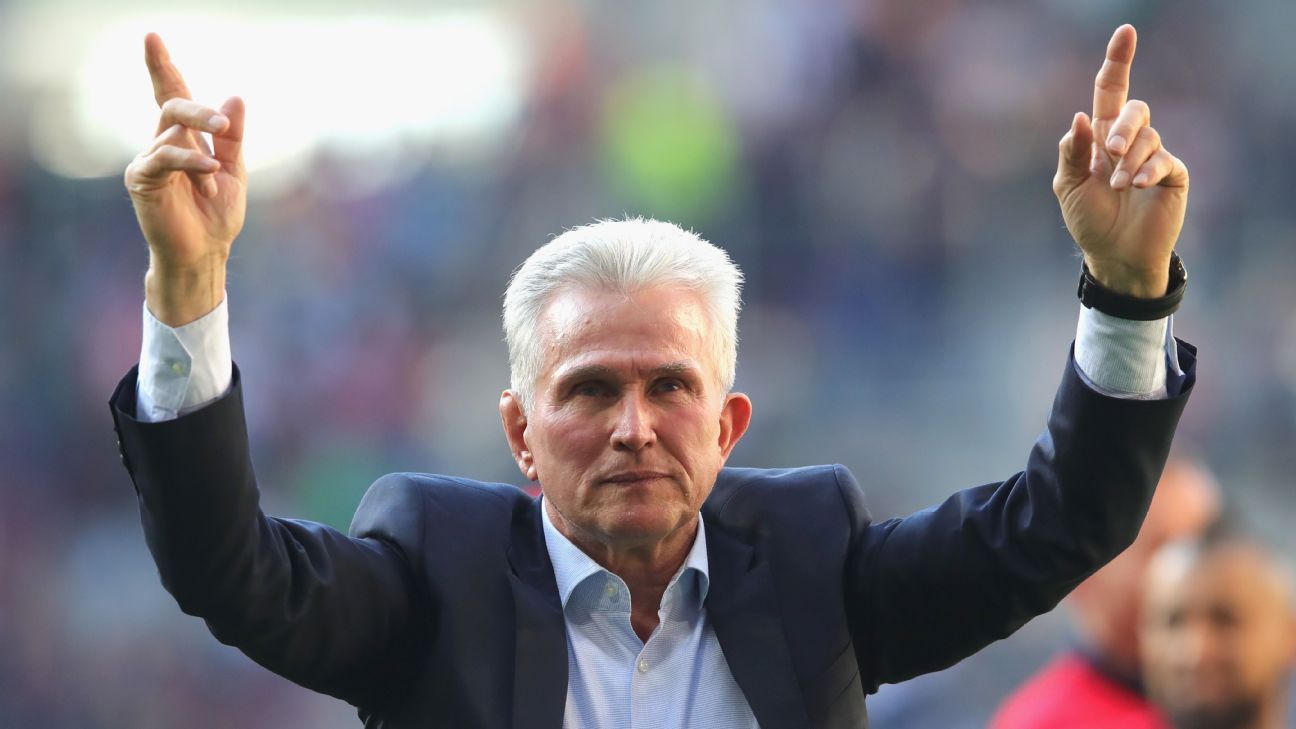 
The Heynckes heart won’t be divided — not one iota.

But Josef, to his family, Jupp to the rest of the admiring football world, will have to ruthlessly end a love affair with Spain and Spanish football if he’s to finally lower the curtain fittingly on what has been his exceedingly brilliant career.

One way or another, his career and Real Madrid’s well-being have so often been intertwined that it’s both poetic and mischievous of fate to pit Bayern Munich against Los Blancos, out of all the clubs in all the world, as Humphrey Bogart might term it, to discover whether Herr Heynckes is to retire with a shot of winning Bayern’s second Treble in the Champions League final in Kiev.

That this fixture, Bavaria against the heart of Spain, has become a European Clasico — bristling with aggression, vendettas, suspicion, ego and drama — is well known. But perhaps many who don’t follow Spanish football assiduously are unaware of quite what Madrid, and La Liga, have meant to this 72-year-old gentleman of German football.

I’ve mentioned here before, but will paint the picture again, of what the atmosphere was like the day before Heynckes — who now stands to prevent Los Blancos from becoming the only club ever to win three straight Champions Leagues and the first with a hat trick of wins in this competition since Bayern themselves between 1974-1976 — relieved Madrid of the burden of a 32-year wait to add the seventh European cup to the six they won between 1956 and 1966.

It was May 1998 and, condemned to fourth place in La Liga and eliminated from the Copa del Rey by a second-division side, Madrid had already decided that this immense striker, still to this day the Bundesliga’s third-top all-time scorer, would be dispensed with.

“Do you think that winning Madrid the infamous Septima, their seventh European Cup, could save your job?” a Dutch journalist asked him.

A long pause. A baleful look. The world settling heavily on his shoulders while we waited for an answer. “No, my future at Madrid doesn’t depend on this game.”

It was a remarkable reply.

Yes, we all knew the truth. Yes, seven days later his president (about whom he answered that day that: “I have the same relationship with Lorenzo Sanz as I have with my wife …”) announced on the radio that Heynckes would be ordered to stand down even before Sanz had the decency to call him to his house, with sports director Jose “Pirri” Martinez to tell the German to his face that he was out.

But for Heynckes to look and sound so utterly downcast in admitting the truth to a gaggle of international reporters in the Amsterdam Arena nearly 24 hours before the most important match of his coaching career was both typical of him and completely against the grain of managerial thinking either then and now.

Lie, lie and lie again if it will bring you respite, confound your media critics, and most importantly, maintain your players’ focus and intensity. That’s straight out of the coaching manual.

Instead, Heynckes told the truth.

It’s a trait that I love about him. He’d show it again four years later when, as coach of Athletic Club, he told a German reporter that Athletic’s policy of signing Basque-only footballers, while the club, media and fans still expected him to beat Real Madrid (which he regularly did) and Barcelona and qualify for Europe, was “like asking a Volkswagen Beetle to compete in a Formula 1 race.”

The Bilbao Basques didn’t appreciate the comparison. They felt slighted, when in fact all he’d been doing was telling the stone truth in an interview when after beating Real Madrid twice in the space of three weeks, his Rojiblancos subsequently took big beatings from Celta Vigo and Villarreal.

Just before he won Bayern their only Treble to date, back in 2013, he was asked about the club’s wisdom in signing Javi Martinez from Athletic. Making it quite clear then, as he does to this day, that it was his rather than the club’s wisdom to sign a player he’d first encountered in the San Mames youth system a decade earlier, he commented that: “Nobody knew Javi when he came here. Franz Beckenbauer thought we were talking about a coffee brand!”

The other week, amid the triumph of yet another German title win, brutally hammered out week after successful week, Heynckes was returning to his apartment block after a day’s work — and following weeks of exposure in the media, given his team’s immensely powerful season.

He was carrying a plastic bag with “FC Bayern” emblazoned on it, and an elderly American couple said to him: “Oh! Are you a Bayern fan?” Not a big deal for visiting North Americans not to know the grey-haired 72-year-old for whom he was. But typical of Heynckes to tell that story, teasingly against himself, to the Bavarian media the next time he spoke to them. I like that.

That Treble of 2013 followed the brutal, brutal disappointment of losing the Champions League final in Bayern’s own stadium to Robbie Di Matteo’s Chelsea. To reach that ultra-dramatic night, guess who Heynckes and his Bavarian bruisers had to bounce out of the semifinal on penalties?

Yes, Real Madrid. Of course. It was 3-3 on aggregate, a spot-kick contest predicated on nerves, adrenaline and guts. Sergio Ramos skied his, and Heynckes, not for the first time, had hurt the team that sacked him after that 1998 triumph.

Overall, Herr Osram (his cruel nickname, awarded because when he’s furious or his blood is rising, his face goes from pale pallor to red glow pretty damn quickly) has inflicted defeats on Los Blancos, whether as player or coach, with Borussia Monchengladbach, Bayern, Tenerife and Athletic.

Whether his most famous, most stunning was as a coach of Borussia Monchengladbach, when his Foals thumped Madrid 5-1 in the last 16 of the 1985-86 UEFA Cup, his Tenerife side, starring current Fulham manager Slavisa Jokanovic, slapping Real 3-0, or those two Athletic wins in the space of three weeks back in 2003 — you can choose.

Winning these next two encounters might well be his most significant punches to Madrid’s gut.

Whatever the case, Zinedine Zidane (who opened the scoring back in 2003 for Madrid but was on the losing side to Heynckes’ Athletic Club in San Mames) will be the seventh Madrid coach Josef-Jupp has faced following Luis Molowny, Benito Floro, Vicente Del Bosque (regularly), Jorge Valdano, Arsenio Iglesias and Jose Mourinho.

In fact, fate already prescribed that this German who has tangled with Madrid so often over his career, as striker and coach, would be the last manager Del Bosque ever faced as Los Blancos manager. One day after Madrid beat Heynckes’ Athletic 3-1 on the last day of the season in 2003, becoming Spanish champions again, Florentino Perez dispensed with the man who’d go on to make Spain European and world champions.

But my tale of Heynckes and his love affair with Spain, its football and La Liga life doesn’t quite end there.

When he steered Bayern to their 2013 Treble, it of course came at a terrible cost to the late Tito Vilanova. Ferocious in La Liga’s title chase, Vilanova’s Barca were physically depleted and “Easter flat,” as it’s becoming to be known around the Camp Nou when it came to the penultimate European hurdle.

Heynckes, pitilessly, sent his team out in that Champions League semifinal to give the Blaugrana a harrying, a battering and a chasing like they’d never before suffered. The aggregate score was 7-0, and it could have been much more.

To some, that stained Villanova’s 100-point, 115-goal title victory — not Heynckes.

When the Catalan football paper Mundo Deportivo organised their annual gala several months later, they phoned Heynckes and told him that, for his Treble, he was their coach of the year. He turned them down flat and said: “You’re wrong, the winner must be Tito Vilanova. Anyone who can fight cancer, spend weeks in New York having aggressive therapy and still win a 100-point league — that’s the coach of the year … any year.”

Not only that, but Heynckes insisted on flying to Barcelona to make the presentation despite the fact that the Catalan, then just a couple of months from his untimely death, was too ill to attend. A warm, noble and in my eyes magnificent attitude from Real Madrid’s Wednesday-night rival.

The last time I clapped eyes on Heynckes, it was outside Sevilla’s stadium a couple of weeks ago.

Walking out after training, to the team bus, Bayern’s coach and players were in the open street. Some very minor fencing had been placed there, but effectively, the 72-year-old and his team were pretty much nose to nose with a decent-sized mob of local Spaniards. But what they wanted from him was an autograph, a selfie, a picture of the former Tenerife, Athletic and Madrid trainer.

And there he stood, for some 20 minutes, entertaining the local fans, posing patiently, not showing an iota of the peremptory short temper that can be part of his makeup when he’s irked.

And this, win lose or draw against Real Madrid in the Champions League semifinal, is a grand, dramatic way for him to say “adios” to his love affair with Spain, which dates all the way to 1973, when he tormented his future employer, Pirri, by scoring twice in a 2-1 win over La Roja for West Germany.

Jupp, Osram, Josef or Herr Heynckes — call him what you will — has been one of football’s all-time greats. And there might yet be more proof around the corner.