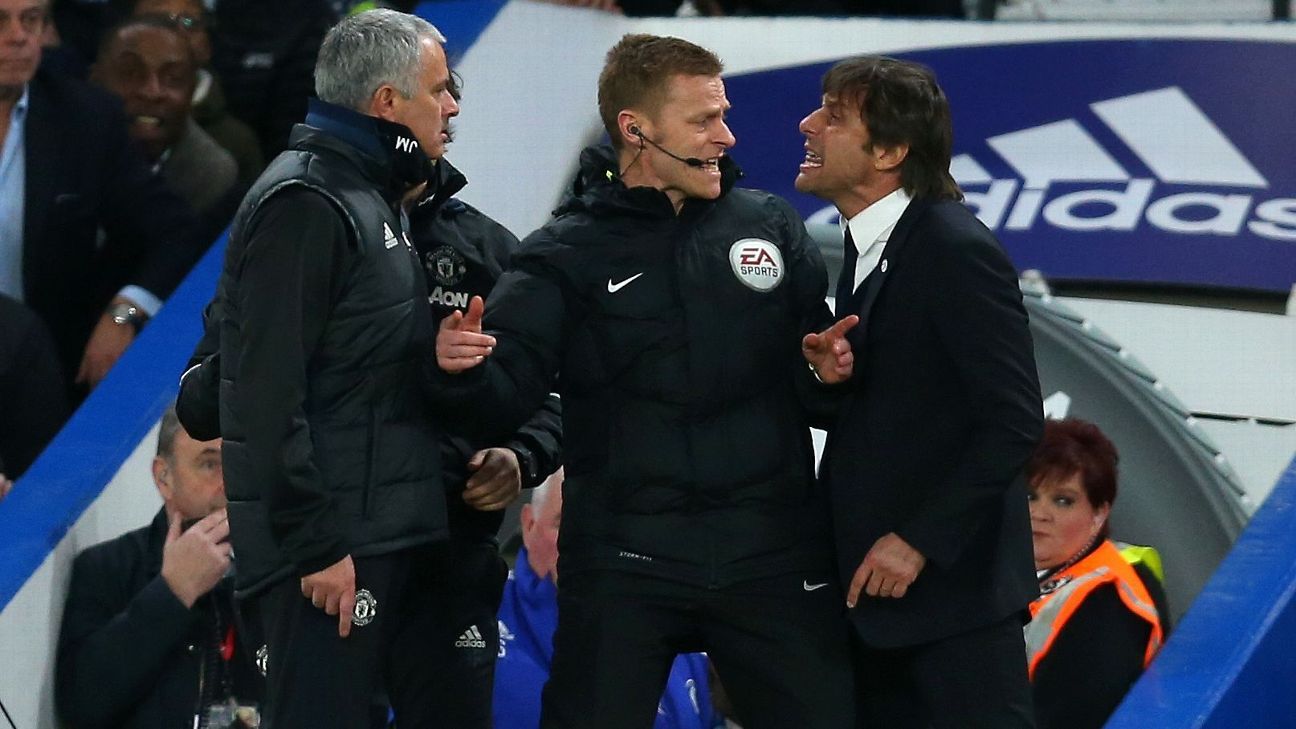 
Turn back the clock a decade and Manchester United and Chelsea were the best two teams in Europe.

“I know it can be different for fans, who might have long standing rivalries with Liverpool or Manchester City, but Chelsea were our biggest rivals,” Nemanja Vidic told ESPN FC. “Chelsea were the team who pushed us and we pushed them. We drove each other on. In the league, in the cups, in Europe. We pushed each other to the limit; we were doing well in England and also in Europe.”

Vidic’s highlight as a footballer would come against Chelsea in the 2008 European Cup final in Moscow, a game that was decided on penalties. The sides would have met again the following year, had it not been for Andres Iniesta scoring a last-minute goal at Stamford Bridge, a venue where United have picked up fewer wins than any other away ground this century.

“Stamford Bridge was a tough place to play,” Vidic said. “The pitch is tight and Chelsea had a strong physical presence with [John] Terry, [Michael] Essien, [Frank] Lampard and [Didier] Drogba, who I usually marked. Along with Sergio Aguero and Luis Suarez, Drogba was my toughest opponent; you had to be very careful when you played against him. He scored so many important goals, he was very consistent. We were both at the peak of our careers. He relied on his physical strength, but he was clever, too. He’d get a free kick on the edge of the box which Lampard could then take.”

Backed by the money of owner Roman Abramovich, Jose Mourinho’s talent revolutionised Chelsea after took over as manager in 2004. In his first season, Chelsea won the league for the first time in 50 years and won a second successive title in 2006, clinching the prize by beating United 3-0 at home.

But United were poor at Stamford Bridge before Chelsea came into money. In the last 20 seasons, they have won the league fixture just three times, drawing seven and losing 10. There has been only one win in the last 15 and that was against nine men in 2012.

Mourinho knows all this. He helped make the side managed by Antonio Conte what they are and, while United taking Nemanja Matic from them was a blow, Chelsea are the champions and getting a result there will be very difficult, even though the hosts are going into the game after a 3-0 hiding at Roma on Tuesday.

United don’t concede three goals to anyone. A 4-0 defeat at Chelsea aside last season, only one team — Watford — have scored more than twice in the 80 matches since Mourinho took control. Before that, four teams managed it in 2013-14, three teams in 2014-15 and four in 2015-16; five clubs put three or more past United in 2012-13, Sir Alex Ferguson’s last season.

The aforementioned 4-0 game was a disaster, though that didn’t stop the travelling United fans singing more and more as the goals flew in for Chelsea. And when March’s FA Cup 6th round draw set up a return visit, most thought: “Well, that’s the end of our cup run.”

Again, the support was brilliant but, again, it was in a losing cause as Chelsea won 1-0. Mourinho felt he had things right tactically until Ander Herrera was sent off in the 35th minute but, after that, there were times when the dominance of Conte’s side was so total that the 6,000 United fans at the opposite end didn’t come close to seeing the ball.

Mourinho, who must attend a court case in Spain on Friday morning before flying back to Manchester to oversee a training session, is an expert in avoiding defeat and clearly picked Tuesday’s team against Benfica with Sunday’s game in mind.

Phil Jones and Antonio Valencia were rested and Ander Herrera, man of the match in April’s unexpected 2-0 win at Old Trafford against champions-elect Chelsea, started on the bench. Marcus Rashford and his England teammate Ashley Young, who was recalled to the national team squad on Thursday, were also subs, as was the out-of-form Henrikh Mkhitaryan.

The defensive formations can frustrate fans yearning for more excitement but Mourinho is a pragmatist, who prefers his team to attack against the weaker sides, at least until he feels he has a line-up good enough to go and attack the best.

United’s manager also feels that criticism of his side is unfair and can point out that the Tottenham team they beat were good enough to outclass Real Madrid four days later. The European champions and Huddersfield are the only clubs to defeat United in 16 games this season.

Mourinho gets more right than wrong and remains a very good manager. He has improved the team — albeit at great expense — and has given youngsters a chance while also re-invigorating the careers of Herrera, who wasn’t happy under Louis van Gaal, as well as Marouane Fellaini, Antonio Valencia and Marcos Rojo.

Though he could cause an argument in an empty room, his players remain loyal to Mourinho. They like him, and not just because he’s made the team hard to beat or because he picked up three trophies in his first season. They think he fights their corner, even when, in the case of Romelu Lukaku, it doesn’t need fighting as the fans are on his side.

Mourinho remains popular among fans, even if he has caused divided views with recent comments about them, but he’ll be loved more if he can go back to his old stomping ground and beat the champions.