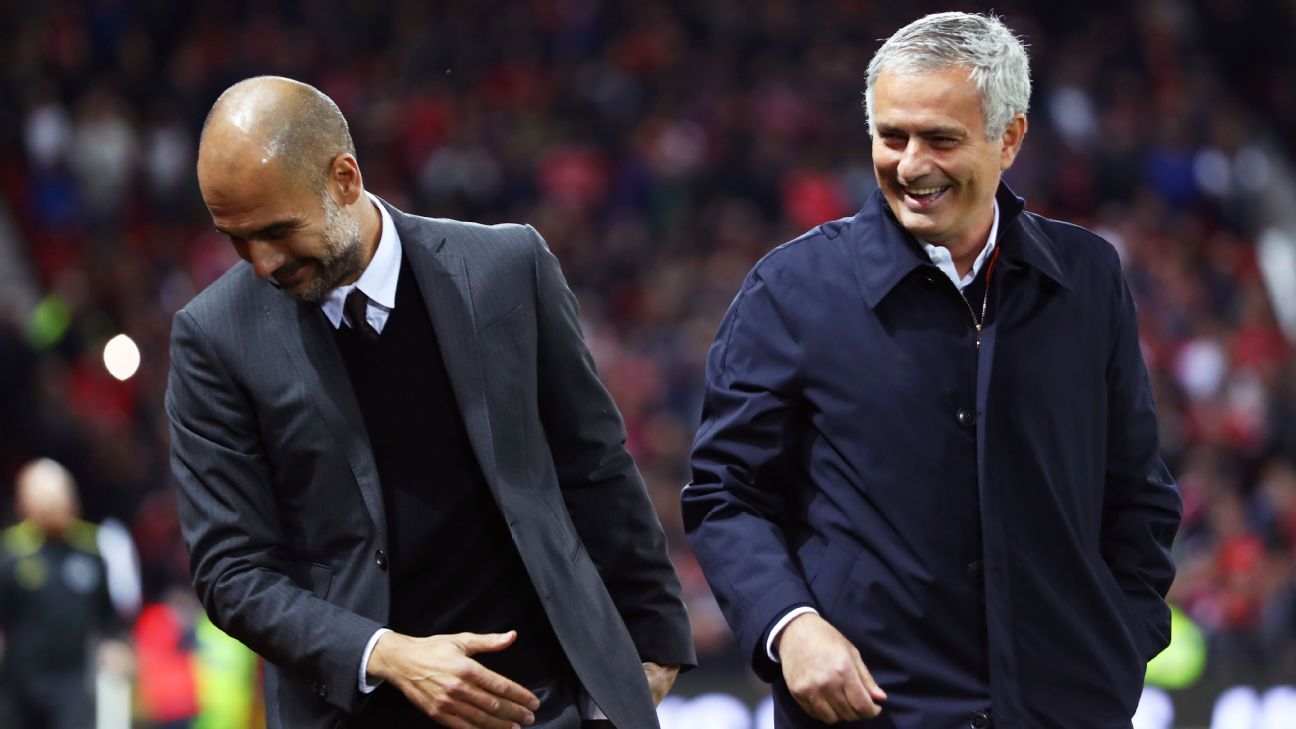 
Jose Mourinho has told ESPN FC he has a positive relationship with Pep Guardiola and that the rivalry as managers of Manchester United and Manchester City is “completely different” to the intensity between Real Madrid and Barcelona.

Mourinho and Guardiola will go head-to-head in Houston, Texas, on Thursday when United and City play the first Manchester derby outside of England in the International Champions Cup clash at the NRG Stadium.

The two managers, who worked together and became friends at Barcelona during Bobby Robson’s reign as manager in the late-1990s, approach their second seasons in Manchester having failed to spark a title battle between United and City in their first year at their respective clubs.

But despite the hostility which rose to the surface during their fractious rivalry as managers of Real and Barca, Mourinho insists that he and Guardiola have great mutual respect for each other.

“You know, in Spain, it is two clubs fighting against each other,” Mourinho said. “Now Atletico Madrid is also close, but in our time, it was just about us.

“For three years, it was just about us. Champions League matches, La Liga titles, Copa del Rey finals, Super Cup finals. Everything was about Real and Barcelona. We were in a situation of [it being] not easy. In England, I knew, I knew before it happened that it would be completely different, because it’s a completely different league.”

One year on from the renewal of “Pep vs. Jose” in Manchester, the focus on the two men has diminished due to Chelsea’s success as Premier League winners. But Mourinho claims that the spotlight has also shifted because of the conduct and actions of himself and Guardiola.

“I think the way we behaved, both, I think make it also blow in that direction,” he said. “Many people would think wrongly that we had a personal situation, to which we always told ‘no.’ It was just the consequence of being in Barcelona and Real Madrid in a specific period of their history.

“We were good friends and we showed that last season, that we could perfectly show the football world that our relationship is positive. Are we rivals? Yes. We want to win the same titles? Yes. But with the respect that we could show last season.”

Thursday night in Houston gives both men the chance to claim an early psychological advantage by securing a victory, but Mourinho claims the result of the game will mean nothing when the major trophies are handed out next May.

“For me it’s just the same [as against LA Galaxy and Real Salt Lake], but against better players and a better team,” he said. “But the way I look to it is the same way I look to the other matches.

“I will still train before the match and train hard. I will still play 22 players, not 11. I will still try to play well and to do things that we train, much more important than the result for me will be the same.

“But I know that is Manchester City and it is a city rival and probably people will look at it with different eyes. If we win, they make a big story. If we lose they make a bigger story. I know that, but I am training.”

Mourinho also predicted that the 2017-18 Premier League title race will be more balanced than last season, insisting that both Chelsea and Liverpool must cope without the advantage of having no European commitments this campaign.

“There is one thing, this season is going be a little more balanced because of the fact the top six are all in European competitions,” he said. “Not like last season, when Chelsea and Liverpool played all season one match per week, with all the others playing in Europeans competitions — especially us, playing in Europa League. “Next season, six teams, and also Everton, are going to play in Europe and that is going to create a new situation for Chelsea and Liverpool.”

While Mourinho stopped short of claiming that Chelsea’s title win was solely down to their less demanding fixture list, the former Stamford Bridge manager insists that their lighter workload was an important factor in their success

“I don’t want to say it was ‘key,’ because if I say that, I don’t want to take credit from the credit that they [Chelsea] deserve,” Mourinho said. “But obviously, to play one match per week and one, two or three days off during the week, have no injuries or no accumulation, the same with Liverpool, I think obviously it helps.

United go into the new season with Mourinho having enjoyed major success in his second season at Chelsea, Real Madrid and Inter Milan, winning either a domestic title or the Champions League. And while he believes he can repeat that feat at United, he insists it will be more difficult to do so.

“Can we win it? We can, but maybe we don’t,” he said. “As I was saying, everything is good and strong, but some of them [other clubs] are really strong on the market, so it is going to be difficult.