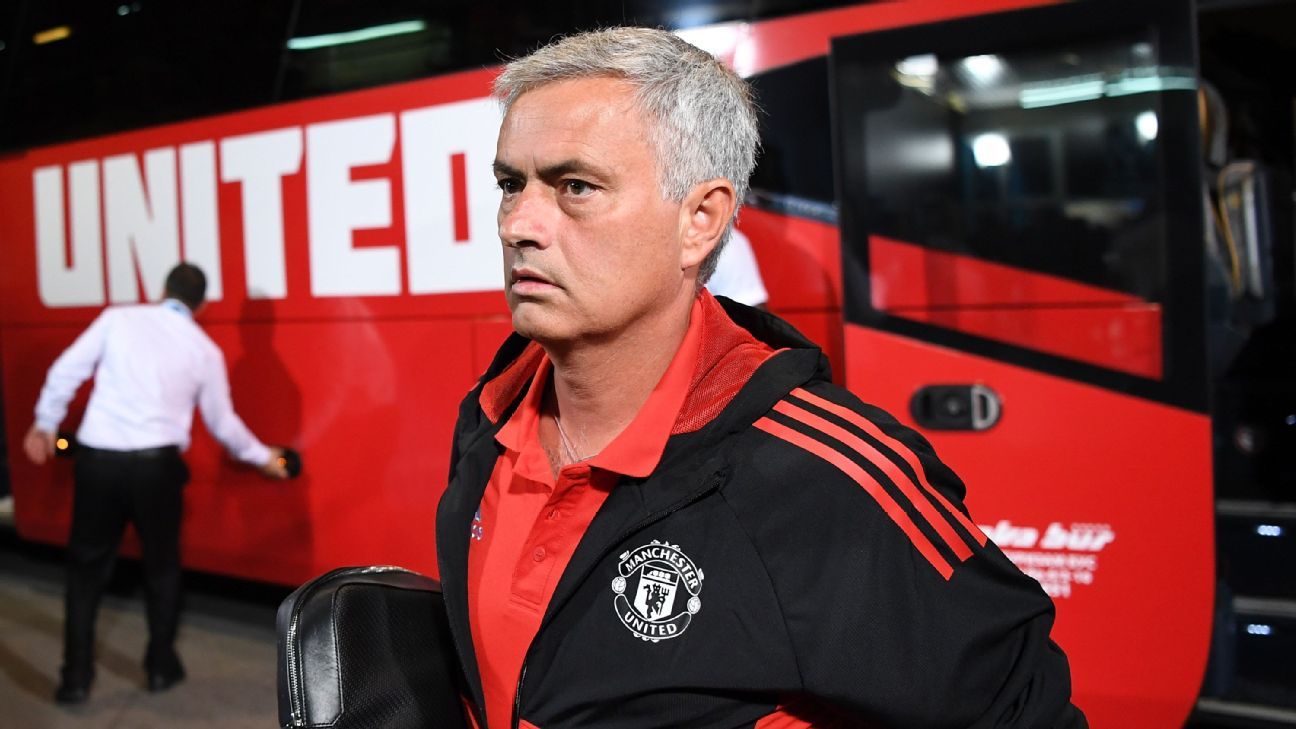 
SKOPJE, Macedonia — Jose Mourinho says the weight of expectation on Manchester United is hampering their bid to reclaim a place at the top of European football — but insists he will get them there soon.

United, who were beaten in the UEFA Super Cup by Real Madrid on Tuesday, are playing with “a giant on the chest,” according to Mourinho, who says they are lagging behind the continent’s biggest clubs after four seasons of upheaval following Sir Alex Ferguson’s retirement.

Mourinho believes it will take two more years to get back to the top, but he insists winning the League Cup and Europa League in his first season at Old Trafford is a good start.

“Manchester United are one of the top three football clubs in the world, no doubt about it,” he said in an interview conducted by UEFA. “But the football club is one thing and the team’s credentials going into a competition are another thing entirely.

“We have a giant on our chest, which is really heavy, but we don’t compare our potential to the biggest clubs in Europe right now. We’ll take it step by step and be humble.

“Last year we won trophies. We’ll improve the team and try to be at that level, to constantly be improving. And I think we’re going to reach that level as a football team in the next couple of years.”

Mourinho also said United do not need to play in the Champions League to be considered “a giant,” but thinks the journey back to the knockout stages of the tournament — something they have not done since reaching the quarterfinals in 2014 — has been made tougher by the emergence of newly rich teams like Manchester City and Paris Saint-Germain.

He added: “Because Manchester United is a real giant, it doesn’t matter if the club is somewhat far away from that level for three, four, five or 10 years.

“It doesn’t matter, the club will always be a giant. But our job is to try to bring the football club back to that stature.

“That’s really difficult these days. Before, the giants were the powerful ones economically, and now there are small clubs in terms of prestige and history, who are giants economically. That changes absolutely everything.

“I want the team to be on a par with the club’s history, which is something I’ve been lucky enough to feel at every club — there was the same kind of feeling at Inter [Milan] and at Real Madrid. We are going to do that, step by step.”

Mourinho has added Romelu Lukaku, Nemanja Matic and Victor Lindelof to his squad this summer as he puts together a group of players capable of challenging in the Premier League and Champions League next season. He is still on the look-out for one more attacking player, although any hopes of recruiting either Gareth Bale or Ivan Perisic are fading.

Mourinho, though, is expecting a breakthrough season from one of last summer’s signings, Paul Pogba, and says a return to the Champions League, and Neymar’s world record €222 million move to PSG, will help.

He said: “I feel the way people analyse [Pogba] is really unfair.

“My wish was for someone to make a signing this season that breaks the record fee that Pogba cost, because the way people analyse him, it’s like, because he was so expensive, he should be the man of the match every game.

“I’m totally convinced that this season will be even better for him, and that playing in the Champions League against the best teams and players will take some pressure off him, because in the Europa League, he was obviously one of the two or three biggest stars.”