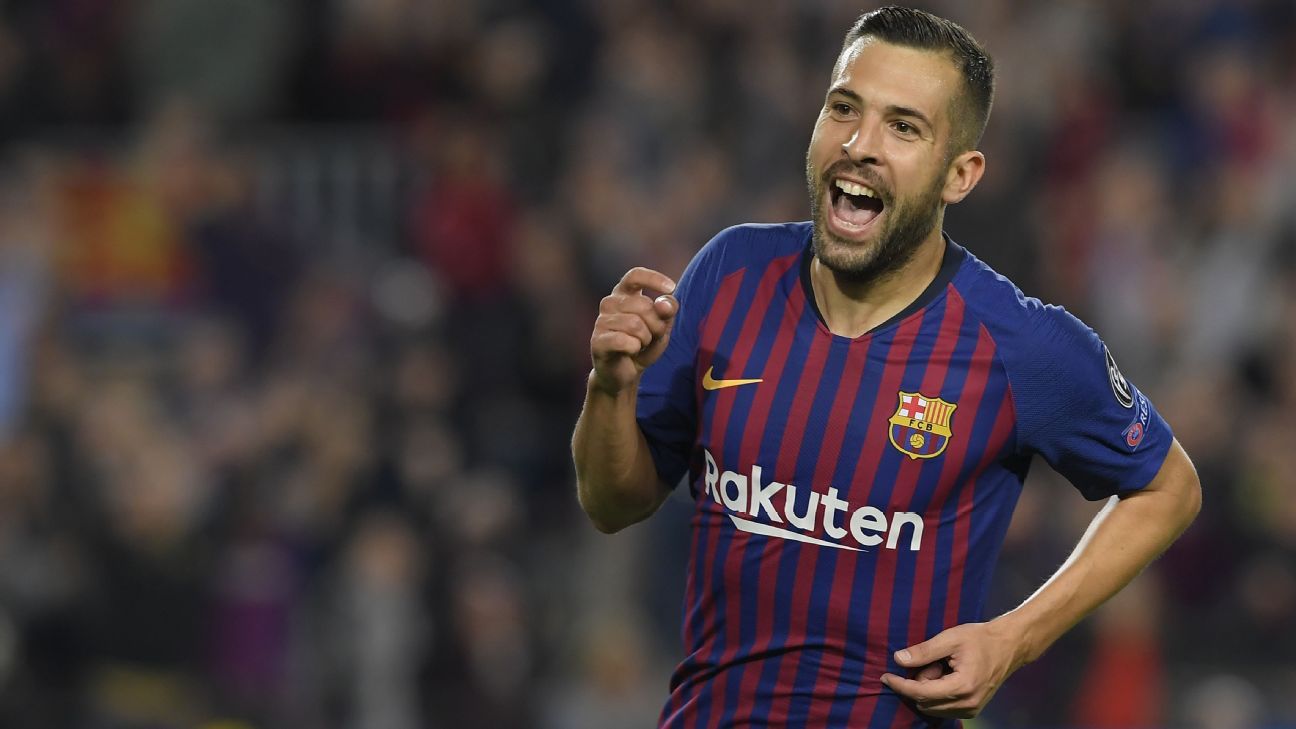 
“I think I’ve talked about Jordi Alba enough,” Luis Enrique protested, but there was one more thing to say, left to the last minute. In the end, even he couldn’t resist. On Thursday, the Spain coach returned Alba to the national team for the first time since the World Cup and the first time since he took over, finally ending one of the oddest absences anyone could remember.

Luis Enrique said he didn’t change his mind because of the “clamour,” but the noise, like the evidence, had become overwhelming. That much was shown by the comments made before the squad was made and the reaction to Alba’s recall. Back then, Gerard Pique had even publicly pleaded with Luis Enrique to “rectify” his mistake; now, everyone was delighted. “He deserves it,” Ernesto Valverde said, speaking for just about everyone.

Well, almost everyone. His club mate, Ivan Rakitic, who knows exactly how much damage he can do, couldn’t help but sigh: Why now, just in time for the game vs. Rakitic’s Croatia (Thursday, 2:35 p.m. ET; ESPN+)?

“He’s in! He’s in!” cheered the front cover of El Mundo Deportivo. “Justice!” Sport said. “Luis Enrique corrects himself at last,” the front of AS said.

Make no mistake: This was the story around Spain. In the news conference the day Luis Enrique named his squad at Las Rozas, Spain’s headquarters 25 kilometres northwest of Madrid, there was an opening question about something else, as if thrown in there just for a moment’s respite before getting down to business, in a way, a question pretending that this wasn’t going to be what everyone knew it would be. And then it was Alba almost all the way, as if Alba were all that mattered.

The manager evaded questions about what happened between them — few doubt that there was something else, something personal, some conflict from their time at the Camp Nou together, for it certainly couldn’t be related to football — and insisted that all that mattered was that Alba was in the squad now. Sitting in that room, it was as if Alba was the only person in the squad, eclipsing all else.

Eventually, at the point at which Luis Enrique was asked if Alba had been forced to say sorry so that he would be allowed to return, the coach pointedly suggested that he had said enough about Alba and wasn’t going to say much more … so they asked something else for a while. But then, right at the end, someone recalled the time that Vicente del Bosque said that if he could be a footballer again, he would like to be Sergio Busquets. “Who would you like to be?” Luis Enrique was asked.

Well, quite. Luis Enrique is a wind-up merchant, his tongue wedged further into his cheek than most people seem to realise, and he couldn’t resist. “Although,” he added, “I’m taller.”

Try to think of someone who has had a bigger impact this season. Starting with the big two, Real Madrid and Barcelona. Lionel Messi? OK, but he has been out for a month — and returned to defeat (yes, yes, along with Alba). Luis Suarez? He has been astonishing over the past month, but what about before that? And right now, pretty much the entire Madrid team are nonstarters. So maybe you have to go to someone from Celta Vigo or Sevilla or Espanyol. Iago Aspas, Pablo Sarabia, Borja, maybe.

But as good as Alba?

When to comes to Spain, it’s Alba too. The idea that he wasn’t the best left-back was firmly buried at the Ramon Sanchez Pizjuan against England — hence the unanimity of the bafflement at his absence — but again, it’s worth expanding it beyond his position to all players. If you look at the Spain team now, how many — in terms of permanent talent and temporary form — could be said to be potentially the best two or three in the world in their place right now? Alba is one. Busquets, maybe? Saul, perhaps?

When it came to the biggest game, Alba produced the biggest performance. He took Madrid apart in the Clasico, whizzing up and down the left. He runs with his chest out, his head tilted back and his legs whirring, almost like a cartoon character. Any minute now, he’s going to go “Meep! Meep!”

There is a time in every run when he seems to incline his neck that little bit further, and suddenly, hyperspace is hit. And then, whoosh! Suddenly, he’s in the area.

Frankly, he looks a bit funny a lot of the time, but bloody hell, he’s fast. He reaches 33 kph, which is some speed, but here’s the thing that really matters: When it comes to the bit with the ball, actually doing something with it, playing football, it’s like time slows. Not him — time. He doesn’t play like someone who is accelerating or seemingly out of control. Instead there is precision, tranquility and, so often, a goal.

No one has more assists than Alba this season. And these are real assists — not just the final pass, giving it to someone who still had loads to do. This is a play, not just a good dead-ball delivery, not just a cross swung in the box that someone somewhere gets a head on. This is laying it on a plate: the perfect pass, usually delivered from the byline, the entire length of the pitch used, usually delivered backward. Take the Clasico for Philippe Coutinho. Or Rayo Vallecano for Suarez. Half the goal was his.

Alba has been flying since Luis Enrique left Barcelona. He was good before then, in truth — until those final months — but he has been especially good since. As he admitted, he was better off without Neymar in front of him, giving him the entire wing on his own. He also pretty much admitted that he was better off without Luis Enrique, which might be part of the reason he didn’t get the Spain call until now.

Now, though, he has become un-ignorable, even for Luis Enrique. But here’s the question: Was that maybe in part because Luis Enrique ignored him? Was rejection his rocket fuel? Did that drive him even faster? Luis Enrique said a few days ago that Alba looked good, but then, “he always does.” Most took that to mean that he would not call the defender up, that nothing had changed his mind, but four days later, he did exactly that.

Perhaps Spain’s coach was wrong, anyway — “Jordi gets better every day,” Valverde said — or perhaps not. At least not like that. Perhaps he was a genius instead, a master of man management and emotional stimulation, overlooking him to make him the best player in La Liga. Luis Enrique ignored Alba just enough to ensure that he could not ignore him anymore.