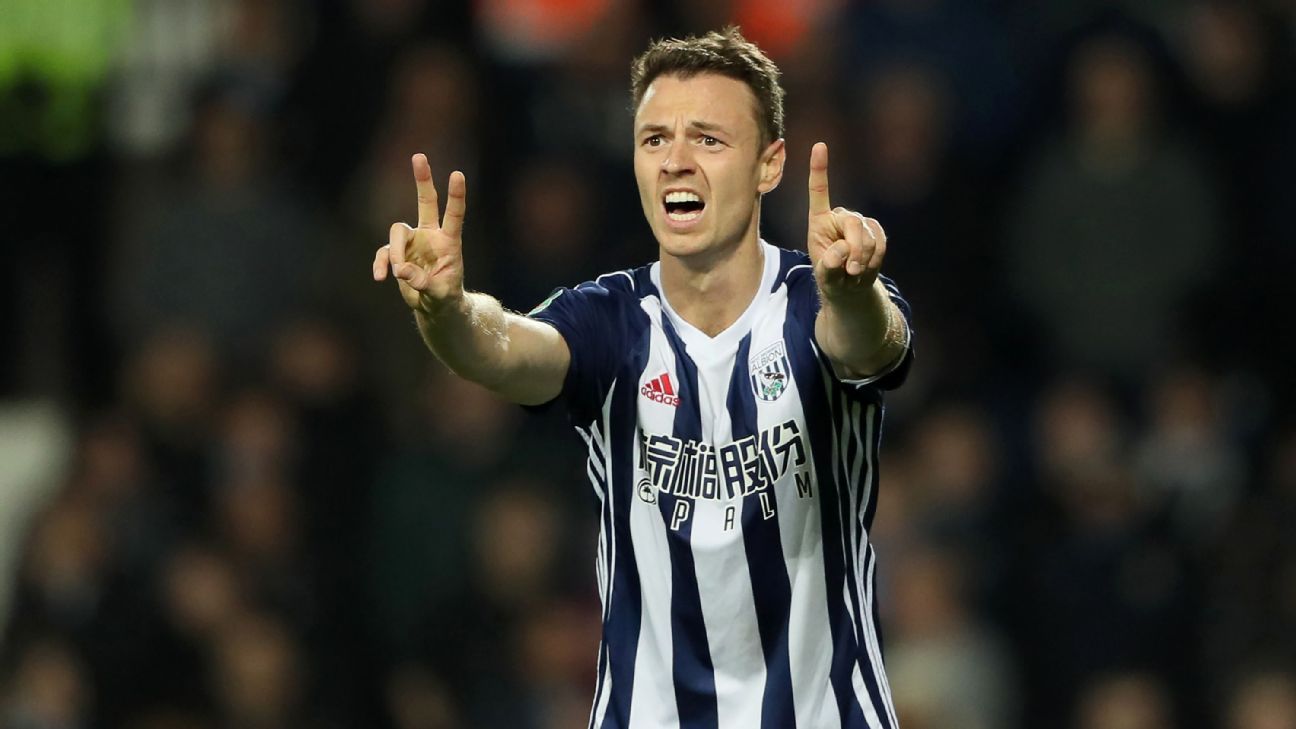 
Jonny Evans would have been the perfect signing for Arsenal, but just like Cristiano Ronaldo, Zlatan Ibrahimovic, N’Golo Kante and several others whom Arsene Wenger supposedly almost signed, a deal was never done for the West Bromwich Albion defender.

Ronaldo, Ibrahimovic and Kante will always be held up as the biggest examples of “the ones that got away” during Wenger’s long reign as Arsenal manager, and quite right too, considering their impact elsewhere having either been rejected by Wenger or choosing to follow a different career path.

Evans, though, is always likely to be nothing more than a mere footnote in the list of players Wenger never managed to sign.

The 29-year-old spent much of his career trying but not quite succeeding to become a first-choice centre-back at Manchester United.

He couldn’t break up the Rio Ferdinand-Nemanja Vidic axis at Old Trafford — nobody could, not even Gerard Pique — but when those two defensive giants eventually succumbed to the rigours of age and injury, the Northern Ireland international was not backed to fill the gaps by David Moyes or Louis van Gaal, and he headed to The Hawthorns in 2015 to play regular football and make up for lost time at Old Trafford.

Any club would regret not signing Ronaldo or Ibrahimovic when they had the chance, but Evans?

As good a defender as he is, Arsenal are all about flair and excitement, the so-called “beautiful game” of Mesut Ozil’s vision, Alexis Sanchez’s explosive brilliance and, well, conceding too many soft goals.

This is why Arsenal’s failure to push harder for Evans in the summer of 2016, when he returned to West Brom after impressing with Northern Ireland at Euro 2016, was a mistake on Wenger’s part.

There was also interest in Evans this summer. Manchester City were always the front-runners to sign him if West Brom could secure a replacement, but Wenger once again looked, thought about it and chose to stick with what he had.

It is that kind of decision-making that has become Wenger’s fatal flaw. He takes too long to make a decision on a player but then usually chooses to keep faith with those already at his disposal, regardless of their shortcomings.

Wenger and Arsenal will get a reminder of Evans’ qualities on Monday evening, though, when West Brom head to the Emirates in the Premier League.

His appearance will not prompt a rush on ticket sales for the game at the Emirates, but the more astute among the Arsenal supporters might watch the West Brom captain and think of what might have been.

Sometimes, it requires something other than a box office signing to make the difference to a team, and Evans could, maybe would, have been the game-changer for Arsenal.

Wenger pretty much has the front end of his team working like a dream, with so much attacking threat going forward. But the best forwards in the world are only as good as the defence behind them, and Arsenal continue to be distinctly unimpressive when it comes to keeping the ball out of the net.

This season’s statistics are alarming. They have conceded eight goals in five league games — half of them coming in last month’s 4-0 capitulation against Liverpool at Anfield — but Leicester also put three past them on the opening weekend, and Stoke created enough chances to win by more than a solitary goal in their 1-0 victory on Aug. 19.

Yet the visit of West Brom will evoke painful memories of the 3-1 defeat at The Hawthorns in March, when two Craig Dawson headers from Albion corners exposed Arsenal’s inability to master the most basic defensive requirements.

Everyone already knew Arsenal had a soft centre in their back-four, but West Brom punished them so brutally that it seemed inevitable that personnel changes would be made this summer.

But guess what? Nothing happened, with the exception of the signing of a left-back, Sead Kolasinac, to rectify Arsenal’s defensive shortcomings.

Gabriel Paulista was sold to Valencia, and Wenger came close to offloading Shkodran Mustafi to Inter Milan, only to retain the Germany international. But in terms of improving his defence with a proven, experienced, international quality centre-back, the stable door was left open and unlocked.

Had they offered just over £30 million, Arsenal could have signed Evans and instantly improved their defence. He is a much better defender and footballer than many give him credit for, and his presence would have improved those around him, perhaps even enabling the over-hyped Laurent Koscielny to iron out the recurring concentration flaws in his game or providing Hector Bellerin with the guidance to know when to break forward and when to stay back.

Evans is not Sol Campbell or Martin Keown, and it would be stretching it to compare him to Tony Adams or Kolo Toure, but he is a defender first and foremost, and that is precisely what Arsenal need and have needed for the past decade.

But the fact that they could face West Brom on Monday with four of the same defenders — Bellerin, Mustafi, Koscielny and Nacho Monreal — who lined up at The Hawthorns six months ago says everything about Wenger’s failure to deal with the biggest problem in his team.