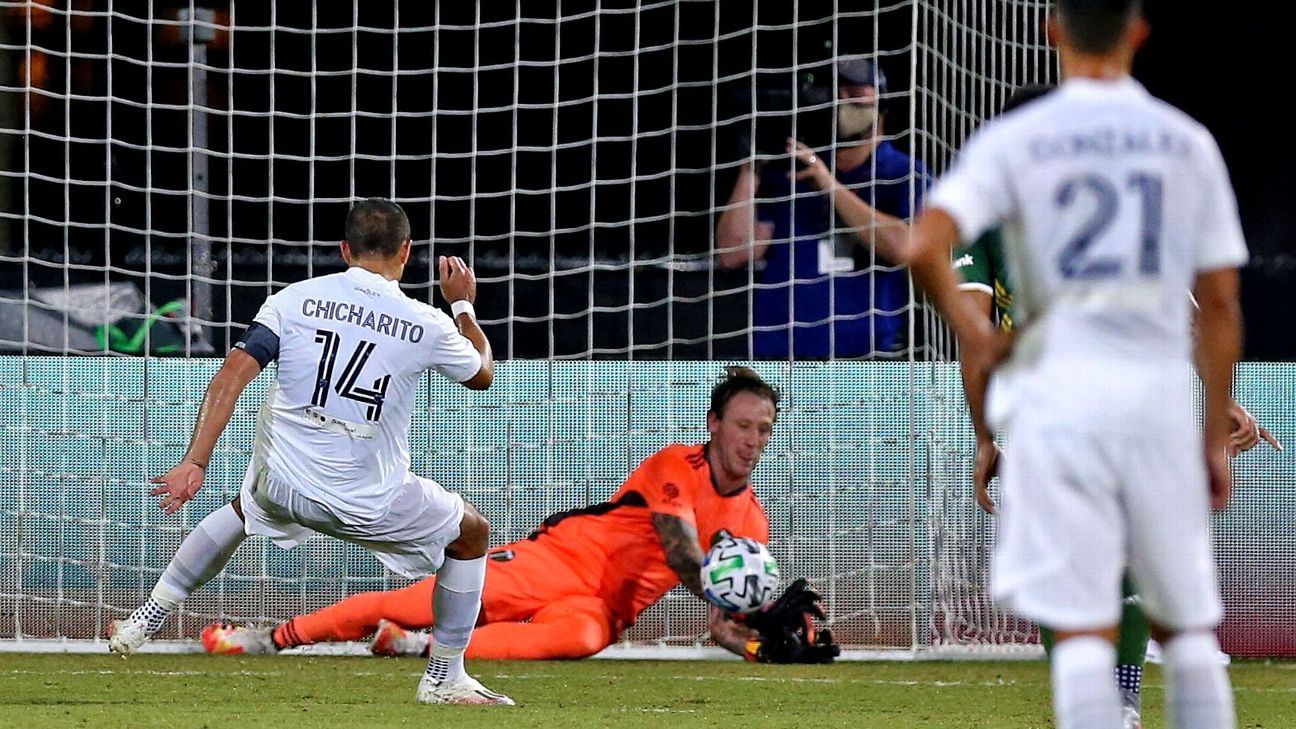 
LA Galaxy striker Javier “Chicharito” Hernandez netted his first Major League Soccer goal on Monday against the Portland Timbers, but said the team’s 2-1 defeat in its opening game in the MLS is Back Tournament was on him for missing a penalty and not capitalizing on other chances.

Hernandez scored in the 88th minute, but had a penalty saved in the 12th and sent a shot over the bar two minutes after half-time as the Galaxy fell to second half goals from Jeremy Ebobisse and Sebastian Blanco.

– MLS is Back Tournament group standings
– Stream MLS Is Back LIVE on ESPN networks, ESPN app (U.S. only)

“As a striker we all know that sometimes that happens,” said Hernandez in a video conference after the game. “You can have ten chances and miss nine and score one, or there are some games you have one and you score it.

“It’s not the greatest taste, scoring your first goal with a loss like this one and then when you miss a penalty obviously.

“I told the lads that this one was on me.

“I always believe that in this sport, even when sometimes the goal-scorer can score the last minute goal, he’s not a hero, and, for example, that I missed the penalty or someone makes a mistake, it’s not only his fault.”

Hernandez added that his early penalty miss in ESPN’s Wide World of Sports in Florida cost his team momentum and confidence, but that the Galaxy shouldn’t have been affected mentally.

“I understand that when you see your forward miss a clear chance like a penalty, it’s heavy, you need to overcome it and I understand it completely, but we need to be stronger mentally, because physically we are very well prepared,” said the Mexico international.

Guillermo Barros Schelotto said the result was “unjust” and that his team played well, but needs to be stronger defensively moving forward.

“We didn’t deserve to lose,” said the Galaxy coach. “We gave them the opportunities to score goals, but we need to be more intense in defense. We had the opportunities, a missed pen, [we] hit the post … they had two shots and they scored.”

The Galaxy will face local rivals LAFC on Saturday looking to get off the mark in Group F. LAFC came from 3-1 down to Houston Dynamo on Monday to tie the game 3-3.